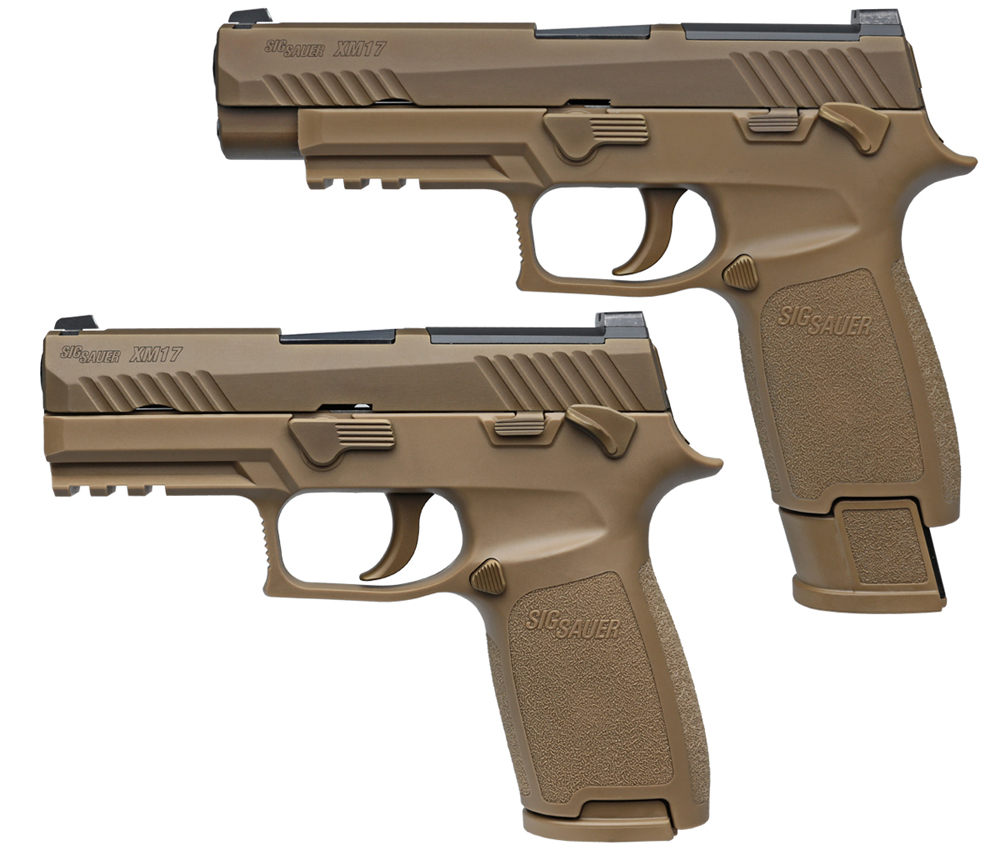 Specifically, the gun that will replace the M9 and M11 pistols over the next 10 years is going to be built by Sig Sauer, Inc out of Newington, New Hampshire.

For all the details (and to see the pics!), keep reading …

SoldierSystems.net was the first to break the story on January 19, 2017 …

Sig Sauer Inc., Newington, New Hampshire, was awarded a $580,217,000 firm-fixed-price contract for the Modular Handgun System including handgun, accessories and ammunition to replace the current M9 handgun. Bids were solicited via the Internet with nine received. Work locations and funding will be determined with each order, with an estimated completion date of Jan. 19, 2027. Army Contracting Command, Picatinny Arsenal, New Jersey, is the contracting activity (W15QKN-17-D-0016).

SIG quickly followed up with their own official Press Release:

“SIG SAUER, Inc. announced today that the U.S. Army has selected the SIG SAUER Model P320 to replace the M9 service pistol currently in use since the mid-1980’s. Released in 2014, the P320 is a polymer striker-fired pistol that has proven itself in both the United States and worldwide markets. The P320 is the first modular pistol with interchangeable grip modules that can also be adjusted in frame size and caliber by the operator. All pistols will be produced at the SIG SAUER facilities in New Hampshire.

The MHS Program provides for the delivery of both full size and compact P320’s, over a period of ten (10) years. All pistols will be configurable to receive silencers and will also include both standard and extended capacity magazines.

“I am tremendously proud of the Modular Handgun System Team,” said Army Acquisition Executive, Steffanie Easter in the release. “By maximizing full and open competition across our industry partners, we truly have optimized the private sector advancements in handguns, ammunition and magazines and the end result will ensure a decidedly superior weapon system for our warfighters.””

I Walked Right By The SIG Booth At SHOT Show and Had No Idea!

It appears as if the actual pistol is a P320 chambered in either .40 S&W or 9mm (most likely a 9mm. In fact, it better be or this is a stupid move on Big ARMY’s part …) still a striker fired pistol but with a manual safety (a somewhat “rare” model).

The TAN/FDE colored handguns on this page are from SIG official, so that’s what it looks like.

Until we can get some hands on this new pistol (or anyone else does), that’s the only pictures I can share!

These two pics are from TheFirearmBlog of the closest current P320 model SIG with the manual safety: 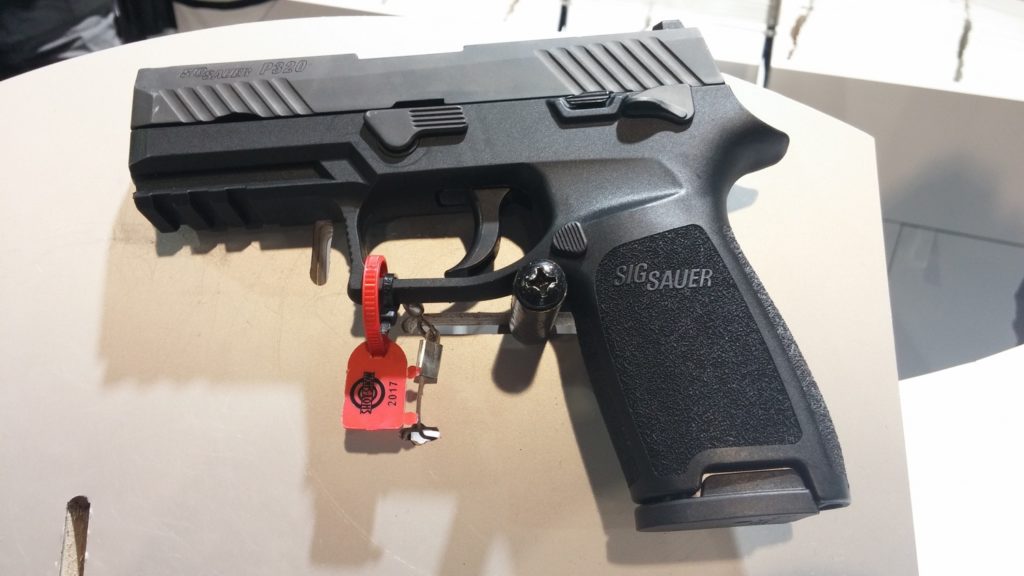 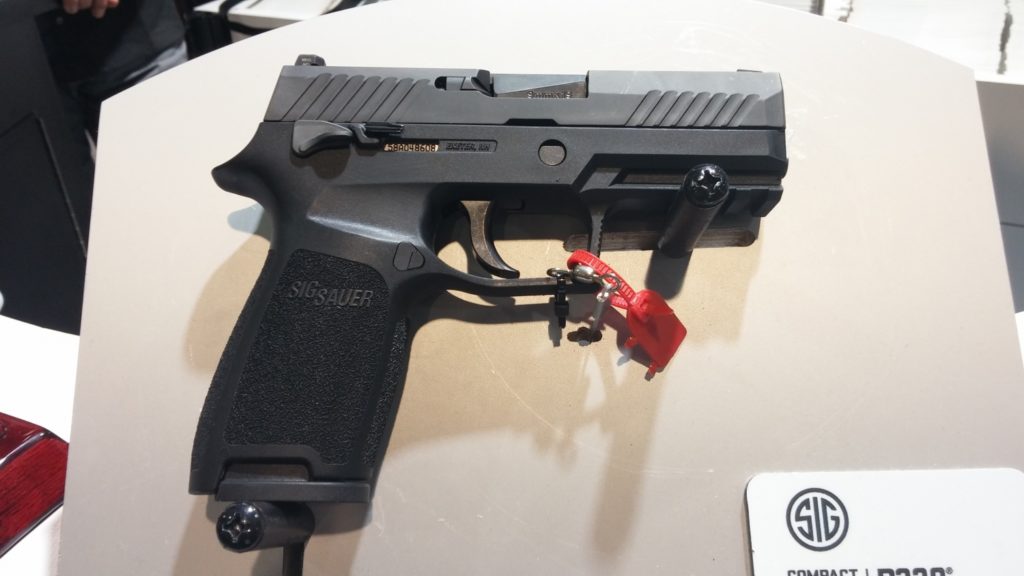 And because I’ve never seen a P320 with a manual safety (though I have fired and seen a lot of P320 at gun training classes without a safety) — I thought this post from WeaponsMan was pretty cool showing diagrams about how the manual safety actually works: 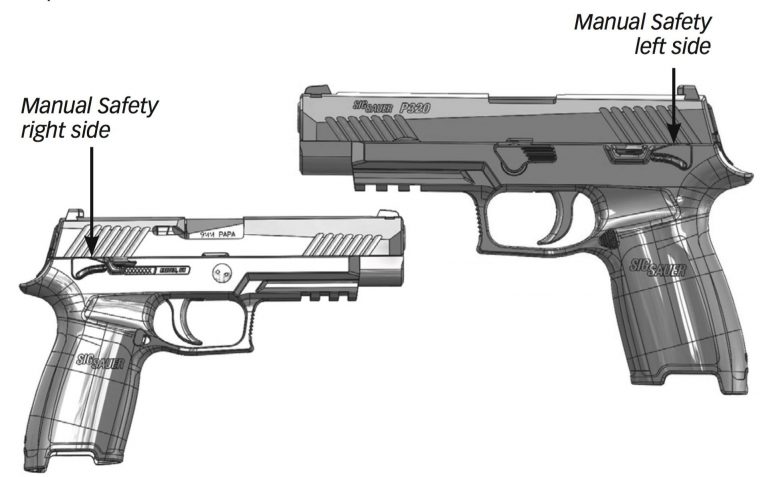 If you would rather watch a video about this story than read, here’s a good one from TFB:

Should they have given the contract to Glock like all the Special Operations Forces are already using?

Do you think it’s a little pre-mature to give it to SIG when the P320 is only a few years old and not yet … proven?

Sound off in the comments! 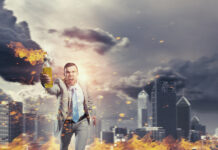 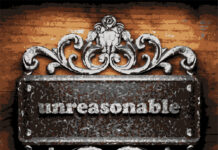