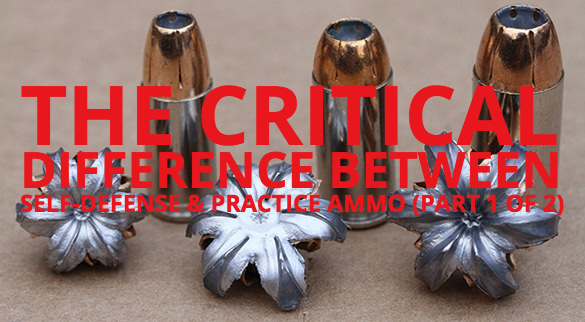 When I first started carrying concealed, I put no thought into the ammo that I loaded in my handgun.

My reasoning was that if I — God forbid — had to use my gun to defend myself, then shooting anyone with any type of bullet was going to be “enough”.

And there’s some truth to that …

But then I discovered that the world of self-defense ammo has improved dramatically in the last decade or so.

And I also discovered that guns are not some mystical “one shot, one stop” all-powerful device. That most handguns are actually not that great at stopping people.

Here’s what you need to know …

When we talk about guns and self-defense ammo we want the best terminal ballistics available.

Basically, if a bad person is attacking you, you want every shot to do the most damage to them and have the best chance of “neutralizing” the threat (whether they die, feel pain, or any of that is irrelevant, as long as they are stopped is the key).

The fact is that we carry handguns not because they are the best way to stop people but because they’re easy to carry and conceal. If we wanted the best “man stoppers” we’d all carry rifles or shotguns.

That’s why caliber debates have been all the rage for gun owners for practically forever. Again, I never paid much attention, and truthfully I’m glad I didn’t because now with today’s modern ammo, 9mm works just as well as anything.

Why I am biased towards 9mm for handguns …

Second, 9mm is the cheapest. For your “self defense” ammo, this isn’t a big deal because you hopefully won’t ever shoot much of it. But for your practice ammo it certainly is because the more you can buy of ammo the more you can practice. With .45 being up to 50% more than 9mm you can see how that’s a big deal …

Third, many people assume the 40 S&W is better than 9mm because of the shift of almost all Law Enforcement over to this ammo during the mid 90’s. However, the truth is that the 40 S&W’s popularity is almost completely because of the 1994 Assault Weapons Ban and the magazine limitation capacity it imposed.

“The AWB allowed gun manufacturers to buy back previously issued LE magazines and resell them on the commercial market. That made all those used, abused, high capacity magazines worth their weight in gold. So manufacturers went to agencies and offered to trade them, at no cost, new & improved big-caliber guns for their wimpy little 9mms. The agency got a new gun that fit in its current holsters, replacing old and sometimes completely worn out guns. The administrators and union leaders got to parade the new guns in front of the troops as proof that they were Doing Something Important. And the gun companies got a bunch of guns that they could refurbish for a few dollars and then sell for a small mint simply by supplying one of those pre-ban high capacity magazines in the box.

“That’s not idle speculation. I worked for two different major handgun manufacturers during the AWB. That’s how business was done. It made the companies a lot of money and made the LE customers very happy. And in the process it brainwashed many people into thinking that somehow the 9mm was a spitball while the .40 was a cannonball.”

Fourth, anyone who an shoot a .45 or 40 S&W can shoot a 9mm better. There’s less recoil, so it’s theoretically easier to be fast & accurate.

Fifth, for any given handgun platform, in 9mm you will have MORE rounds in the gun. More bullets means more opportunities to save your life.

Sixth, as I’ve stated before, all handguns are poor man stoppers but because of modern jacketed hollow point (JHP) ammo technology, 9mm is just as effective as any other “bigger” load (.40, .45, .357, etc)

So the 9mm is cheap, easy to shoot, and effective. What more do you need in a hangun?

Self-defense ammo is just as it sounds, ammo designed for self-defense. It’s designed to be the most effective as stopping threats. Let’s talk about practice ammo first though.

When it comes to practice ammo — in general — any and all ammo will work for you.

In fact, inside of 15 yards, I don’t see much difference between any type of ammo fed through my Glock 19 Gen 4. I’ve shot 1,000’s of rounds of “factory reloaded” ammunition because it’s the cheapest thing I can find and it’s all reliable and accurate inside of 15 yards.

So for practice ammo, you mainly want 1.) reliability (does the bullet go bang and feed fine in your particular gun?) and 2.) accuracy … and 3.) cheap.

If you’re working on your 25 yards or further bullseye work, then I HAVE discovered that certain pistol ammunition is more accurate than others. And you’ll have to do some testing yourself to find the load that is the most accurate in your gun.

How to select the right self-defense ammunition

The short answer is it should meet and pass the FBI’s stringent testing protocol. The FBI requires that ammunition penatrate ballistic gelatin between 12-18 inches with the following requirements:

As you can see, if a load performs well in the FBI test protocol, it will offer the best performance for you no matter what conditions you find yourself in.

A good thing to do is to check your Point-of-aim VS your point-of-impact with your handgun sights and your duty ammo at various ranges such as 7 yds, 10 yds, 15 yds, and 25 yds, so you know where it will hit during this testing.

And then you can forget about your self-defense ammo …

Because your every day carry magazines are loaded up with this ammo, you probably won’t ever have to use it. However, you want an adequate supply because you will slowly use it up by following two best practices …

1.) About every year (assuming you don’t get in an shootings and burn up that ammo), you should use your loaded self-defense ammunition at the range to run some drills. Check accuracy with your sights again. And basically just make sure the ammo still works. NOTE: this is probably overkill, because I’ve heard of duty ammo sitting in police officer guns for up to 5 years and still working fine.

2.) Don’t unload and reload the same round over and over again. This can lead to bullet setback and cause an overpressure issue with the ammo. So you should develop a rule such as “if I load and unload a cartridge more than twice, I will shoot that bullet at the range next time I go“. So you’ll go through maybe 1 bullet of your self defense ammo per range trip using this method. Just be sure to load up a fresh one when you leave the range.

Now, you are ready to know the “approved self defense ammo” list …

In my next article, I’ll share with you the state-of-the-art, best choices in all service caliber handguns “Approved” list of self-defense ammo. Essentially, if the ammo you have in your gun is NOT on this list … you should seriously consider changing it.