If you consider yourself one of the growing number of liberty-loving folks who think to be a TRULY prepared gun owner … you need to consider the possibility of one day being a freedom-fighting guerrilla war fighter … then I have two things to say.

America was founded by a bunch of liberty-loving guys that had to fight a revolution to become more free.

And two, you’re in luck because today I want to tell you about a book that is truly “The prepared citizen’s answer to The Ranger Handbook.”

In short, if you want to know anything about unconventional warfare as it relates to being a freedom fighter, you need this book!

What Are You Preparing For?

Whether you’re worried about a total socio-economic collapse of society where you will be facing increasingly bold and violent street crime, robberies, home invasions and (at least temporarily) mass riots, mobs, looting and a full blown WROL (without-rule-of-law) situation …

Or an increasingly authoritarian Federal government that has slowly morphed into a tyrannical regime hellbent on painting traditional, conservative Americans as “Domestic Terrorists” over the last few decades (while increasing their ‘legal’ powers such as Martial Law, the PATRIOT Act, the NDAA, etc) …

Or an invasion by Russians, the Chinese or even Foreign UN-backed “blue helmet peace keeping” troops being called into our country (possible in any one of the aforementioned scenarios).

In short, for ANY reason, if you want to take your preparedness to the next level by learning the basic doctrine of Unconventional Warfare Guerrilla Operations as it applies to the liberty-minded American civilian in the modern world — THIS is the book to read.

It’s a 384 page handbook called The Reluctant Partisan Vol I: The Guerrilla

Who Is The Author And Why Should You Listen To Him?

The Reluctant Partisan Volume One: The Guerrilla is written by John Mosby. He spent 10 years in Army SOF (Special Operation Forces), including the 75th Ranger Regiment and Special Forces. He’s also currently the author of an online blog entitled “Mountain Guerrilla” which I have been frequenting over the last few years …

His blog and book are, of course, a study of individual and small-unit irregular warfare, as it applies to those of us concerned about impending disquiet in the socio-economic structures of the world and our nation.

WARNING: John is extremely foul-mouthed. He is a former Special Forces operator after all. I don’t know if you’ve ever spent time around anyone in the military but they tend to use language for effect.

If that offends you, or if you can’t look past or (God forbid!) enjoy his use of ‘colorful’ language then there is no need to read any further.

(I should point out though, that you’re a certified idiot if you think that because someone happens to cuss like a soldier, you should not listen to them. In short, if mere words offend you, you would never make it as a guerrilla fighter anyways, so there is no need for you to read this book.)

John shares with you the Guerrilla warfare Special Forces doctrine that’s heavily influenced by three things (as he says himself):

2. Undergraduate and post-graduate degrees in history, with the resulting perspectives they may or may not offer …

3. John’s personal interpretations–based on the previous two factors–of what the continuing decline of socio-economic structure will resemble.

In other words, you have the perfect teacher in John. Why?

I’m not sure if you’re aware of the differences in the different types of U.S. Military Special Operations forces, but Johns’ background is all you could hope for in a teacher of these topics.

That’s because the primary and original purpose and mission of the Army Special Forces (also known as the Green Berets) has always been to train and lead unconventional warfare (UW) forces, or a clandestine guerrilla force in an occupied nation.

Which, obviously, means John is exactly the teacher you’d hope to stumble across if you want to learn these skills and why I’m so excited to share him and his book with you.

What Will You Learn?

John has actually posted the full table of contents to his website, so I feel comfortable posting it here too:

The Reluctant Partisan, Volume One: The Guerrilla

A Comprehensive Training and Evaluation Program for Community, Tribal, and Family Security Preparedness

To me, the best part about this book is the way John teaches this stuff …

As you can obviously tell from the chapter names in the table of contents — John has an entertaining personality. Which is CRITICAL because I don’t know about you, but actual Military Field Manuals are the most BORING manuals in the world to read.

I find this teaching style to be much easier to learn from. And that’s important because this is a DENSE book packed full of information and every one of the 380+ pages is valuable.

I Learned a LOT From This Book (So Much, I Bought It Twice!)

As you should know by now, I have no military or law enforcement background. I’m just a “regular Joe” who decided to become a Prepared Gun Owner. That means I know next to nothing about operating in a war fighter capacity because I have no previous military training.

And the fact is that — while I’ve taken over 170+ hours of open enrollment firearms/tactical training classes — for the most part, I’ve avoided most all “cool guy” spec ops type training classes …

In fact, I had only taken one formal, 1-day, carbine training class before reading John’s book.

That’s because — as I’ve explained before — training time is limited and the Prepared Gun Owner needs to seek out training that’s most applicable to his own paradigm as an armed civilian. In other words, most of the stuff you learn from Tier-1 door kickers– like running around with your AR-15 and full “battle rattle” — is not applicable to your daily life where you’re armed with a concealed handgun.

You’re not a member of a SWAT team doing entries, you’re not a member of a direct action spec ops unit doing smash and grab black ops–you’re a civilian dude that occasionally has to go get milk from the gas station and may have to deal with a violent criminal there or you may find yourself in a public place that some terrorist decides to shoot up (with your wife and kids right next to you I might add).

That said, if you have ALREADY taken quite a few applicable and excellent concealed carry courses that teach you what you need to know to operate in your civilian concealed carrier capacity …

And you’re looking to take it to the next level …

Then THIS is the handbook you need.

John shares the entire unconventional warfare doctrine to give you the correct frame of reference for you to later take those same courses and be able to apply them in a way that works if and when the SHTF!

As far as I know you can still order the book directly through John by going to his website or by visiting the Forward Observer website.

The book is NOT cheap, but it’s worth — at a bare minimum — 10 times what you will pay for it.

For example, at the time of this article publishing, it’s going for $70 over at Forward Observer.

And I can unequivocally state it’s worth TEN TIMES that.

That’s $700 bucks which is about the lowest price you’ll ever pay to acquire a suitable fighting rifle like the AR-15 … and … if you’re wanting to be prepared, but you don’t know how to actually FIGHT with that rifle (like John shows you in chapter 5) then you wasted $700.

I like this book so much, I not only bought my own personal copy but I also bought a second as a “backup” and to support the “cause”.

The truth is that unless you happen to be super lucky and know someone personally that has served in the GWOT as a Special Forces soldier, you simply can NOT get this type of “NO STUPID, THIS IS HOW YOU DO IT!” info anywhere else.

That’s why I think it’s so incredibly valuable. And I recommend you pickup a copy of it today if you want to be a seriously prepared gun owner.

DISCLOSURE: I was not paid for this review or compensated in any way. I paid for my two personal copies of this book at full retail price. While I’ve never taken a live class from John I plan to do so in the very near future. And before publishing this review, I contacted John to make sure it was OK. 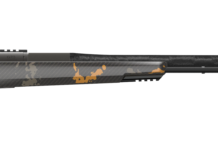 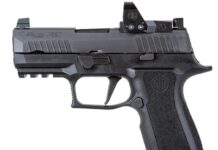 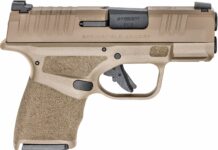 A Micro-Compact 9mm Which Comes Standard As 11+1? Yes. Check It Out