Home Guns How to shoot BETTER than an FBI special agent? 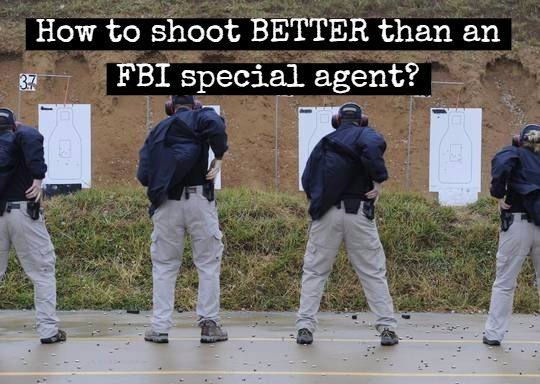 Why The FBI Standards Are Important To You And I …

The FBI reports that 80% of LEO (law enforcement officer) shootings between 2000 and 2009 happened at 20 feet or less. The FBI even trains there guys different now. From a news article:

“The new training protocols were formally implemented last January after a review of nearly 200 shootings involving FBI agents during a 17-year period. The analysis found that 75% of the incidents involved suspects who were within 3 yards of agents when shots were exchanged.”

So it turns out the old “3 shots, in 3 seconds, at 3 yards” is a pretty accurate description of what you are most likely to face in a self defense encounter.

Tom also has made the point that FBI special agents are required by policy to keep their weapons concealed when they’re in business clothing and outside the office, so their gun fights more closely resemble what the armed citizen would face.

In fact, Tom says “It suprises a lot of people to find out that around half of all FBI agent involved shootings occure because some thug does not realize they are law enforcement and tries to hold them up or carjack them”.

Greg Ellifritz makes the point that you should shoot a Federal law enforcement course of fire, pass, and have it signed by a witness (or better yet a local police officer).

“If you have to shoot someone in self defense and your abilities are questioned by the court, it makes a pretty powerful statement to say:

“As a responsible gun owner, I didn’t feel comfortable carrying my gun in public until my skill level was at least as good as the police officers who patrol my community.  I took several training classes and I successfully completed the state’s police pistol qualification course.  Here’s the target to prove it.”

That might shut down any line of questioning that disparages your skill set or paints you as someone who is “reckless” or “wants to shoot someone.”

The only courses of fire that may have more perceived value to a jury are those shot by various branches of Federal law enforcement.

While some citizens in your jury pool might have some bad experiences with local cops, agencies like the FBI usually have a sterling reputation.  It couldn’t hurt to be able to pass the FBI pistol qualification standards.”

I’m going to do it myself soon, so you should too …

Qualification is shot with the QIT-99 reduced size target.

STAGE 2: From Five Yards (12 rounds fired) (all shooting at this stage and during each subsequent stage is performed with both hands):

STAGE 5: From 25 Yards: (10 rounds fired) (This stage requires the use of a barricade.  Greg uses a cardboard target for simplicity and ease of carry, use anything that’s tall enough to stand behind):

– Move up to and behind the cover and fire 2 rounds standing and then 3 rounds kneeling, all under 15 seconds.
– Repeat above

Next time you’re at the range, and you have someone with you who can time, witness and sign your qualification target, you should give it a try.

If you do, send me a picture of your qualification target — or better yet — a youtube video and you’ll get a special prize!

BREAKING: ATF Issues HORRIBLE New Order. Are They Targeting You?