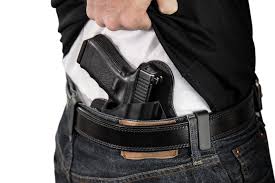 Today, I want to highlight a new research study that John Lott, from the Crime Prevention Research Center published on July 20, 2015 …

It’s the latest study to look at concealed carry here in America.

The good news is that more and more people are carrying concealed every day.

We don’t give this man much praise around here, but I think he deserves it this time. Let’s all give a big round of applause for The Number 1 Firearms Salesman in America …

Ok everyone, settle down. Let’s take our seats and I’ll try and explain why I think Mr. Obama has done so much for the American people.

Why Is President Obama Considered The Number 1 Firearms Salesman in America?

The answer is quite simple. Because Obama is so anti-gun, I believe he has pushed many Americans who were “on the fence” to start to actually care that Obama wants to ban their guns, and they’ve become active gun owners.

In fact, John Lott’s research even highlights this:

Initially the increase in permits was slow, growing from roughly 2.7 million permit holders in 1999 to 4.6 million in 2007. But the number of concealed handgun permits literally exploded during the Obama presidency. For December 2011, the federal Government Accountability Office estimated that there were at least 8 million concealed handgun permits. By the June 2014, it was 11.1 million; in 2015, 12.8 million.

That’s why Obama is considered the #1 Gun Salesman in America.

It’s a short 27 page PDF you can download here, but the ABSTRACT pretty much gives you the gist of what is inside (emphasis mine):

Since President Obama’s election the number of concealed handgun permits has soared, growing from 4.6 million in 2007 to over 12.8 million this year. Among the findings in our report:

— 5.2% of the total adult population has a permit.

— Five states now have more than 10% of their adult population with concealed handgun permits.

— In ten states, a permit is no longer required to carry in all or virtually all of the state. This is a major reason why legal carrying handguns is growing so much faster than the number of permits.

— Some evidence suggests that permit holding by minorities is increasing more than twice as fast as for whites.

— Between 2007 and 2014, murder rates have fallen from 5.6 to 4.2 (preliminary estimates) per 100,000. This represents a 25% drop in the murder rate at the same time that the percentage of the adult population with permits soared by 156%. Overall violent crime also fell by 25 percent over that period of time.

— States with the largest increase in permits have seen the largest relative drops in murder rates.

If you’re a gun grabber, you’re turning red, your core temperature is rising rapidly, and you are about to explode because you can’t think of a way to refute this data …

You’ll probably just clam up and refuse to listen to reason.

If you’re a gun owner, you already know this stuff, but it’s great to see that more and more people are getting guns and protecting themselves and their families.

This is a step in the right direction.

Already, we’ve seen the Assault Weapons Ban of 1994 expire and then the slow rise and eventual tidal wave of Concealed Carry that is now 100% legal in every single state (including the last holdout, the “hive of scum and villainy”, Washington DC).

The next step will be to follow in the footsteps of all seven states where no permit is required to carry in virtually all of the state — the so-called “constitutional carry” states.

It’s so stupid that that has to be a “goal” though right? How many “constitutional free speech” states do we have? How many states do you need a “Free speech permit”? Do we make sure that people have “safety training” for their “Free speech” so they don’t hurt anyone’s feelings?

The Police States run by power-hungry tyrannical oppressors — while they’re forced to offer concealed carry by the Supreme Court — utilize two ways to make it extremely hard to get a permit in those states:

Lott found, “Each $10 increase in fees reduces the percent of adults with permits by about a half a percentage point.” and gives the example of , “… Illinois charges a $150 fee and requires 16 hours of training. With training and range time, it may cost as much as $300, meaning the total dollar costs of getting a permit in Illinois 6 is about $450.”

2. Giving government officials discretion in who gets permits, reduces the percent of adults with get permits by more than two-thirds.

It’s my understanding that it’s still next to impossible to get a concealed carry permit in Maryland, New York and Washington DC for example because you are only issued a permit at the discretion of a Gov official there.

In other words, you have to PROVE to them that you need a gun to defend yourself. It’s of course just one more way for the Jack Booted thugs to deny you any power.

The Washington DC police dept website says this under their concealed carry application page, “Additionally, the Firearms Control Act requires applicants to explain their need for a Concealed Carry Pistol License by demonstrating either a good reason to fear injury to themselves or their property, or any other proper reason. The fact that an applicant lives or works in a high crime area, in and of itself, is not a sufficient reason for the issuance of a Concealed Carry Pistol License. Applicants must demonstrate their basis for requesting a Concealed Carry Permit by submitting a personal statement or supporting documentation or a notarized statement from a third party.”

Because, living in a high-crime area is no reason to fear that you are going to be a crime victim?

(That part of the law by the way was turned down as they note on their website, “A court decision was issued in May 2015 which may have affected the “good reason/proper reason” requirement for some concealed-carry applications (see “Wrenn Order” document, attached below). However, that decision was recently stayed pending further litigation (see “DC Circuit Stay Order” document, attached below).”

… Basically all that means that at this time, they used legal loopholes to keep a judge’s decision that their laws were unconstitutional from going into effect right now. In other words, they’re delaying it as long as possible.)

Get a permit if you need it.

Go get some training and practice with it (it’s fun, I promise).

And carry your gun with you everywhere you go because both you and every other American will be much, much safer.