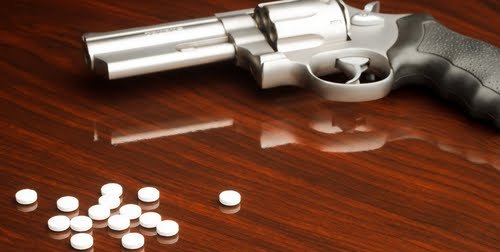 If you’ve ever been in a talk with someone who irrationally fears guns, wants to ban them, or thinks that “we need” more “sensible gun control laws”, then you might want to share this helpful information with them.

Namely, they are TWICE as likely to die from the prescription drugs they have sitting in their medicine cabinet than they are from the gun in their home, or your home, or in the hands of a criminal.

So says a new study released by the DEA showing results from the 2015 National Drug Threat Assessment (NDTA).

To be clear, I think that prescription drugs are WAY over-prescribed in the United States — and this lends some support to my view point — but I do recognize that the majority of my readers are on some form of prescription medication.

Given that nearly 70% of Americans are on at least one prescription drug and that more than half take at least two, I think this is valuable info to share with anyone.

The bottom line is that you hear so much about a “gun violence problem” from politicians and those in the complacent media these days but when you truly look at the data — in whole — from any source, you realize there is no such thing.

I’ll write more about this in the future, but for today, let’s talk about why you’re more likely to die from prescription drugs than firearms.

DEA Press Release: “… drug overdose deaths are the leading cause of injury death in the United States, ahead of deaths from motor vehicle accidents and firearms”

“DEA Acting Administrator Chuck Rosenberg today announced results from the 2015 National Drug Threat Assessment (NDTA), which found that drug overdose deaths are the leading cause of injury death in the United States, ahead of deaths from motor vehicle accidents and firearms.  In 2013, more than 46,000 people in the United States died from a drug overdose and more than half of those were caused by prescription painkillers and heroin.”

And The Mises Institute published an article on the findings.

To quote the excellent Mises article … 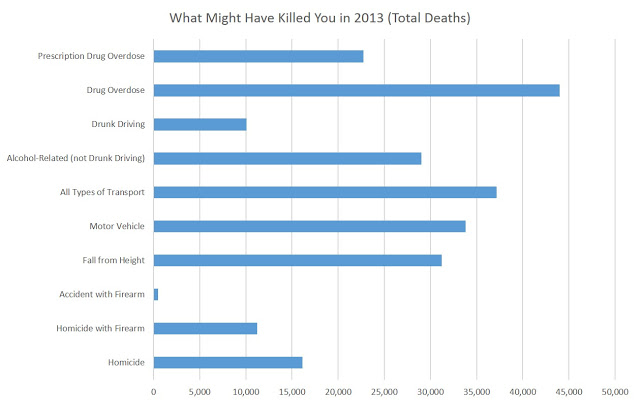 “Those are the total numbers. If you prefer your stats in the often used format of x per 100,000, here you go: 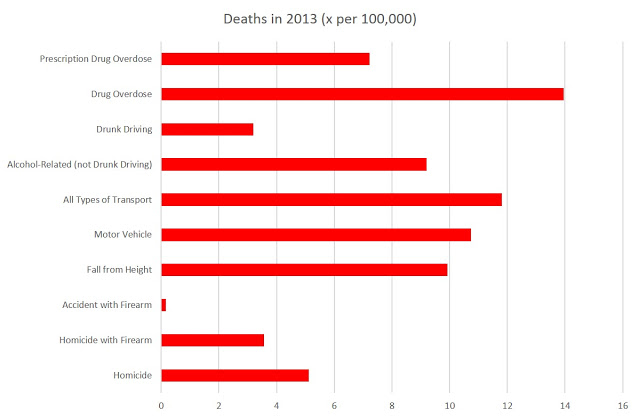 “Obviously,  homicides aren’t exactly a leading cause of death in the US, and gun homicides, even less so. Accidental death by firearms (0.2 per 100,000) is a small blip.

“For all those concerned parents who think little Johnny is likely to get gunned down on the street would be better advised to keep tabs on their prescription painkillers, as Johnny is far more likely to die from popping those than from any gun in your house or in the hands of a school mate.

“Moreover, nothing listed here is even in the top ten of causes of death in the US.You’re much, much more likely to die from suicide, or “influenza and pneumonia”than anything listed above.

The Data Leaves No Question. The Facts Are There Is NO “Gun Violence Problem” In This Country …

… so called “gun violence” is not even in the top 10 list of ways you are likely to die in the United States.

In the chart below you can see the Top Ten Causes of Death, Plus Gun Homicides so you can compare. 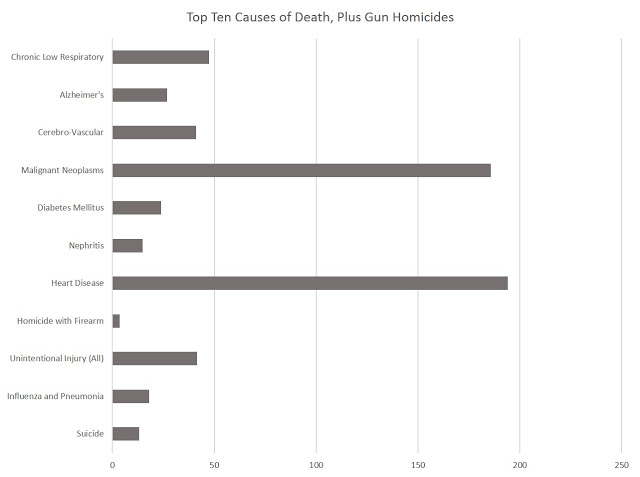 Gun Control Is Purely About CONTROL, There Is Absolutely No Evidence It Will Positively Affect Public Safety …

In fact, there are mountains of evidence to the contrary — aka the places with the most gun control in the United States are often the ones with the most “gun violence”.

(If you notice, I continually put “gun violence” in quotes because it’s a form of propaganda speak that politicians and the media who want to push an anti-gun agenda use. Instead of saying, we have a problem with violence, they attach “gun violence” to it, so as to try and make it something worse or special. Basically they want to blame guns for the violence.)

So the next time you get to talking about gun control with someone who only gets their facts from the media, pandering politicians and talking heads on the TV, go ahead and share with them that they’re at least twice as likely to die from prescription meds than any firearm.