In short, according to all reports, it has been one of the deadliest terrorist attacks in France for decades.

A video attributed to Islamic State was released on the following Monday warning that countries taking part in attacks against Syria would suffer the same fate as Paris.

“We say to the states that take part in the crusader campaign that, by God, you will have a day, God willing, like France’s and by God, as we struck France in the center of its abode in Paris, then we swear that we will strike America at its center in Washington,” the man said.

So are more terrorist attacks on the way to America?

Most likely. Here’s why and what you can do to prepare …

The video attributed to ISIS/ISIL/Islamic State specifically mentioned that they would attack the center of America, Washington DC, much like they attacked the center of France (Paris).

I don’t think those are idle threats.

A successful attack against America would strengthen the resolve of ISIS and it would serve an important function in their guerilla warfare strategy — to get the United States to further commit more resources in retaliation (ultimately weakening the U.S. further).

Does That Mean You Should Worry?

I think that if you live in a major city, Washington DC or New York come to mind, you should be worried.

For the majority of people, that don’t live in these places, I don’t think the risk has increased beyond what it always has been.

My main point is basically geographical …

One, we have two massive oceans that make it harder for war to spread to our soils (as opposed to France or any country in Europe).

And two, is the sheer size of the United States. For example, according to the TexasMonthly.com map below, “France is roughly the same size as Texas—but you can comfortably stuff Switzerland in alongside it like an accessory.” 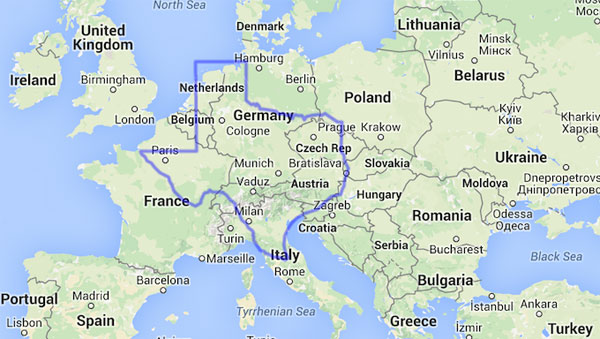 The point is that in order for a terrorist attack/guerilla force to make an impact in the United States they’d have to attack an important part of the U.S. Washington DC certainly fits, as well as NYC.

All of the above is why, with a population of over 300 million people, according to the Cato Institute, you being an American are about eight times more likely to be killed by a police officer than a terrorist. Of course, that is purely meant to grab your attention, because cops are not the enemy, and you are 17,600 times more likely to die from heart disease than a terrorist attack.

Perspective folks. That’s all I’m asking, so you don’t get worked into a frenzy by the media. You can’t think if you’re emotional and reacting out of fear.

Does this mean I don’t think you should prepare at all for the possibility of a terrorist attack near you?

Not at all. This blog is about being prepared after all …

Of note, he covers both how to deal with the threats of bombs and suicide bombers and very basic medical advice everyone should know. Both these topics would have helped the people in France.

As for the specific attacks in Paris, the details are still not clear yet, so I won’t talk much about them, but it’s important to keep your head up and prepare as always … but at the same time … don’t let the media play you for a fool and keep you reacting on emotions.

I want to close with this short piece by Ron Paul, published orginally at the Ron Paul Institute for Peace and Prosperity.

Paris and What Should Be Done by Ron Paul

The horrific attacks in Paris on Friday have, predictably, led to much over-reaction and demands that we do more of the exact things that radicalize people and make them want to attack us. The French military wasted no time bombing Syria in retaliation for the attacks, though it is not known where exactly the attackers were from. Thousands of ISIS fighters in Syria are not Syrian, but came to Syria to overthrow the Assad government from a number of foreign countries — including from France and the US.

Ironically, the overthrow of Assad has also been the goal of both the US and France since at least 2011.

Because the US and its allies are essentially on the same side as ISIS and other groups – seeking the overthrow of Assad – many of the weapons they have sent to the more “moderate” factions also seeking Assad’s ouster have ended up in the hands of radicals. Moderate groups have joined more radical factions over and over, taking their US-provided training and weapons with them. Other moderate groups have been captured or killed, their US-provided weapons also going to the radicals. Thus the more radical factions have become better equipped and better trained, while occasionally being attacked by US or allied planes.

Does anyone not believe this is a recipe for the kind of disaster we have now seen in Paris? The French in particular have been very active in arming even the more radical groups in Syria, as they push for more political influence in the region. Why do they still refuse to believe in the concept of blowback? Is it because the explanation that, “they hate us because we are free,” makes it easier to escalate abroad and crack down at home?

That solution is to reject the militarists and isolationists. It is to finally reject the policy of using “regime change” to further perceived US and western foreign policy goals, whether in Iraq, Libya, Syria, or elsewhere. It is to reject the foolish idea that we can ship hundreds of millions of dollars worth of weapons to “moderates” in the Middle East and expect none of them to fall into the hands of radicals.

More bombs will not solve the problems in the Middle East. But a more promising approach to the Middle East is currently under fire from the isolationists in Washington. The nuclear deal with Iran ends UN sanctions and opens that country to international trade. Just last week the presidents of France and Iran met to discuss a number of trade deals. Other countries have followed. Trade and respect for national sovereignty trumps violence, but Washington still doesn’t seem to get it. Most presidential candidates compete to thump the table loudest against any deal with Iran. They will use this attack to propagandize against approving trade with Iran even though Iran has condemned the attack and is also in the crosshairs of ISIS.

Here is the alternative: Focus on trade and friendly relations, stop shipping weapons, abandon “regime change” and other manipulations, respect national sovereignty, and maintain a strong defense at home including protecting the borders from those who may seek to do us harm.

We should abandon the failed policies of the past, before it’s too late.

While I completely agree with Ron Paul’s assessment, I do not think for one moment that his advice will be followed by the US Government or France or any Government for that matter …

Which is why I think you should prepare now.

As more attacks are aimed at suspected terrorists, you’ll see more retaliation against the American people.

Don’t be ruled by fear, but be prepared. More is coming.