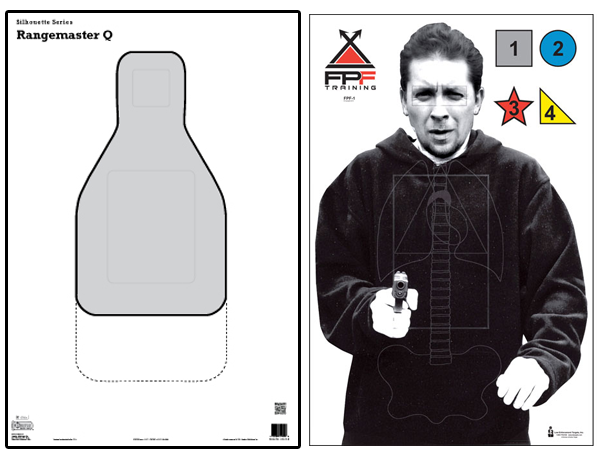 Most of the world gets a vast majority of their information from what they see on TV.

Sadly, not many people read anymore.

That’s why most people have an extremely WRONG view of what happens when a person is shot with a handgun.

The truth is, as we’ve talked about in the series on handgun self-defense ammo — ALL service calibers (9mm, .40, and .45) are WEAK when it comes to stopping a threat.

In other words, unlike on TV where the bad guy gets shot once or twice with a handgun and they either immediately drop dead or fly across the room, in the real world, where you shoot a person matters a LOT.

This is commonly called “shot placement” and it’s important.

The 3 Reasons People Stop Fighting When Shot With Handguns

The ONLY time you shoot someone is if they are aggressively trying to cause you or someone you are protecting death or serious bodily injury.

Therefore, it’s important that you shoot to STOP them as quickly as possible.

There are only three reasons that an attacker will stop attacking you if you shoot them with a handgun.

Let’s talk about each of these.

The “Psychological Stop” And Why You Should NOT Count On It

The truth is, as I said, that people don’t go flying when they are shot like in the movies or TV.

Like the rest of the natural world, pistol bullets are governed by Newton’s Third Law of Physics that states every action has an equal and opposite reaction. Therefore, if a pistol bullet was powerful enough to knock a man down, it would knock YOU down when you fired the hand gun. Think about it.

In fact, many people don’t even realize they have been shot until after a fight/attack is over. You’ll hear stories from cops or military that talk about combatants not realizing they were bleeding until they checked themselves over because they couldn’t feel it during the heat of battle.

So a truly determined attacker might not know or even care if he has been shot because he wants to take your head off either way.

(This works both ways too, if you ever get shot in a fight, keep fighting because just because you got shot doesn’t mean you’re done. Keep fighting and kill the other guy.)

Now, many times as soon as a gun is drawn in self-defense the attacking criminal takes off running. They run even faster if they get shot at.

But don’t bet your life on it. If you have to fire a gun in self-defense, keep shooting the person until the deadly threat is neutralized (aka, he’s no longer on his feet, conscious, or clearly stops attacking).

Recently, Dave Spaulding of Handgun Combatives wrote a great article on shot placement, and he has this to say about the vital organ/nervous system stop (emphasis mine)…

“We all know that a shot to the Abdullah (aka The Almond) at the top of the spinal cord is instantly fatal, but it is small and very hard to hit. The brain is covered with a hard helmet called the skull meaning rounds will need to hitthe eye sockets, nose cavity or ear canals to have a better chance of hitting brain matter.  That said have you ever seen a person shot in the head that did not penetrate? I’ve seen it several times and the person struck does the same thing someone does when hit with a baseball and not wearing a helmet…they fall down. No guarantees, but incapacitation is incapacitation regardless of whether death is involved.  If the person goes down for whatever reason, I am good with it.  Thus, face shots…especially at close range…can still be effective even if penetration is not achieved.

“Shots to the heart and spinal column can also be quite effective, though there are a number of documented cases of people being shot in the heart and remaining mobile for 20, 30, 40 seconds before succumbing to their wound.  It is called “ambulation after death” and it is due to blood and oxygen already in the brain. A lot of damage can be done in this short time span. The spinal column is at the back of the body and is more accessible to a shot to the back, which can be justified in court due to how fast a body can turn, but a frontal or side shot is more likely.”

So the central upper torso is where all the “vital” stuff is and is where you should aim. Also, face shots, aiming for the ocular cavity.

What this amounts to is a roughly 3×5 card size area in the face of an attacker, and a roughly 7″ wide by 9″ tall area in the center of the upper chestrepresenting the heart area.

The Stop By Massive Blood Loss

Finally, we have the stop by massive blood loss.

This can happen if enough blood is lost, the blood pressure inside the attacker drops and so does he. This can take a WHILE.

The main point here is that relying on blood loss to stop an attacker is a BAD plan because you could shoot an attacker 10 times and he could still strangle you to death, then later die of blood loss in the hospital emergency room.

That’s why it’s important to focus on shot placement and aim for the vital zones previously discussed.

How To Practice Combat Marksmanship

With all this in mind, and the importance of hitting vital zones so eloquently stated, here is how you practice this.

First, you need a basic level of foundational marksmanship. This can be achieved by buying 3×5 cards (a pack of 100 is super cheap) and starting at 5 yards and taking as long as possible to get all shots inside the card. At this range, your bullet holes SHOULD be touching, but at least get them all inside the card to move on.

Once you have that, move back to 7yds and try to get all your hits inside the same 3×5 card. Once you can do that consistently, you have a “good enough” level of combat marksmanship.

At this point, it’s a good idea to focus at least some of your shooting on realistic targets such as the Rangemaster Q target or the FPF Training Target shown below.

As you can see, both these targets present a humanoid shape, along with SMALL vital target zone areas. Both have approximately 3×5 vital zones (give or take a few inches either way) in the head and 9×7 vital zones in the upper torso.

Then, and only then, should you focus on speeding up a little to challenge yourself.

A good goal to strive for is 3-5 effective hits in the vital zones in 3 seconds or less at 5 yards, drawing from your every day concealment holster with your every day carry gun on a target like this.