Home Guns 3 steps to save a TON of time and money becoming a... 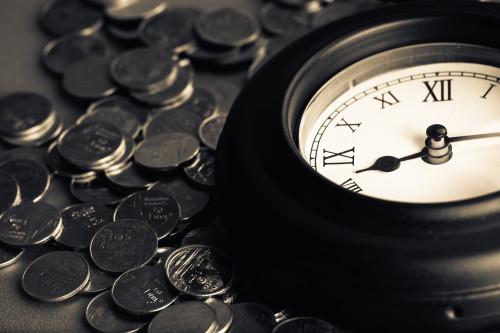 If you are like most gun guys (and gals) I know, then you dream about how cool it would be to have unlimited time and money to shoot like a professional shooter …

Someone who gets PAID to shoot guns, sponsored by one of the big gun companies, and gets tens of thousands of rounds of ammo absolutely FREE …

Surely, if you were a professional shooter and someone was paying for your ammo and you had nothing to do all day you could be come a much better shooter, right?

In fact, I’m willing to bet you may have used this as an excuse as to why you can’t become more skilled?

If so, then keep reading because I’m about to show you how to save a TON of time and money and still become a better shooter.

With these tips, you’ll have no excuses left and you can easily become a great shooter if you want to.

Step 1: Do Short Dry Fire Sessions, As Often As Possible

The two big things most people are short on are time and money. Luckily, short dry fire sessions can overcome both of these problems.

What is dry fire training? In a nutshell, you are unloading your gun, triple-checking to verify it’s completely unloaded — then putting all the ammunition in the other room — and practicing and simulating actually firing your gun. It’s shooting your gun without ammo. The ONLY thing you can’t practice with dry fire is recoil management because there is no recoil to an empty gun (obviously).

Why Short Sessions? Because it’s actually a better way to train. The point of dry fire training is to do a LOT of “perfect” reps to ingrain your gun skills into your body until you become unconsciously competent.

The fact is that you will perform how you practice, so it’s critical to keep the sessions short so you can use your maximum focus.

How short? As little as 25 trigger presses could be performed every day — which should take 5 minutes or less — and if you did it every day you would have better trigger control than 95% of shooters.

How often? As often as possible. If you are going for super short sessions (such as 5 minutes or less), then you can do it every day. 10-15 minute sessions could be done every day or every other day.

The idea though is to do it as often as possible because increased frequency is better for skill learning.

In case you think dry fire training won’t allow you to build excellent gun shooting skills, think again. 2008 Olympian Pistol shooter SFC Keith Anderson says “My ratio of dry fire to live fire is 100 to 1. I cannot overemphasize the importance of dry fire … And never think that you need to go out and shoot live rounds to get better. Because you don’t.”

No matter who you are, you have 10 minutes per day you could dry fire practice. If you don’t, then you could always wake up 10 minutes early. The truth is though that the typical American spends almost 5 hours watching TV every single day.

Even at the minimum time and effort investment of 25 trigger presses per day — less than 5 minutes per day — you can practice 9,125 “shots” in a year.

How much money did you save?

Step 2: Go To The Range With a Plan and an Ammo Budget

Again, we’re all tight on time and money, but most of us can carve out a range trip every other week (2x per month) or at least 1x per month.

If you have an “ammo budget” for each range trip and a practice plan, then you can keep your expenses and time down.

You can get a LOT of good practice in with just 100 rounds of ammo or less. Here is an article I wrote on how to test all your defensive handgun skills with just 9 bullets.

In fact, the more time you spend dry firing, the less time you even need to live fire. The live fire will then become just a way to “confirm” the skills you’ve been practicing with dry fire (because it’s easy to “cheat” yourself and go faster than you can see/shoot and you can’t practice recoil control with dry fire).

Targets can be free or nearly free too. A standard 8.5×11″ piece of printer paper makes a great beginners target. You can fold that in half so it’s roughly 4×6 inches and it makes a great “vital zone” sized target. And my personal favorite is the 3×5 index card which you can get for about 2 cents a piece (or less).

If you want to print targets there are plenty of places online to do it as well. Need cardboard to put the targets on? Take every cardboard box that you receive in the mail or at the store and break them down and save them, they make perfect target holders.

If you have your own private land to shoot on it’s even easier because you can use the age-old soda/beer cans/bottles to shoot at for variety of targets.

Most of us gun guys/gals have a lot of guns. And we like to buy more whenever we have the opportunity.

That’s understandable because guns are cool, but there’s something to be said for using your extra funds to buy extra ammo instead.

Considering that you can often buy a couple thousand rounds of ammunition for the price of just one decent gun … ammmo might be a better place to spend your money.

You can do it one of two ways:

1.) “Dollar Cost Average” into it. But a certain amount of ammo on a regular schedule. Much like dollar cost averaging stock purchases, this allows you to buy more for your money when the prices are cheap and less when prices are expensive, but on the whole, over time, you’re doing ok. You could make it a habit to pick up as little as a box or two of ammo every single paycheck period.

Ammo is a decent investment actually. It’s not likely to drop in price as the trend will generally go up with inflation (like the cost of most goods) and there are usually significant spikes in price due to political reasons such as threats of gun control every few years.

In the charts below, you can see sales analysis data just from the site Gun-Deals.com showing the price per round differences from 2007-2015. The trend is clearly always up. 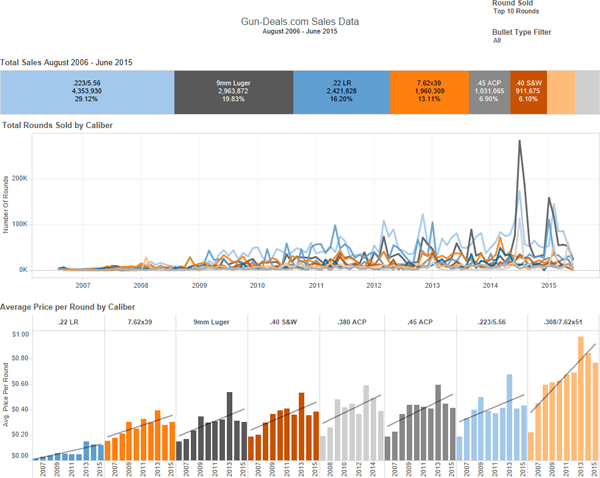 If money ever gets tight, you should be able to sell it if need be and not lose your shirt.

Anyways, most of us probably have a few guns we’re not in love with. If you’re really interested in improving your shooting skills you could always sell a few guns you don’t love to buy more ammo too.

If You’re Short On Time and Money, Try These Tips!

In short, you can see that if you make liberal use of dry fire practice — and with a little planning and wise use of funds — you can become highly skilled with a very small investment in time and money.

After all, with the tips I just gave you, you can build some really good shooting skills with about $1 dollar per day and a time investment of about 10 minutes per day.

Is it worth it? I think so. What do you think?