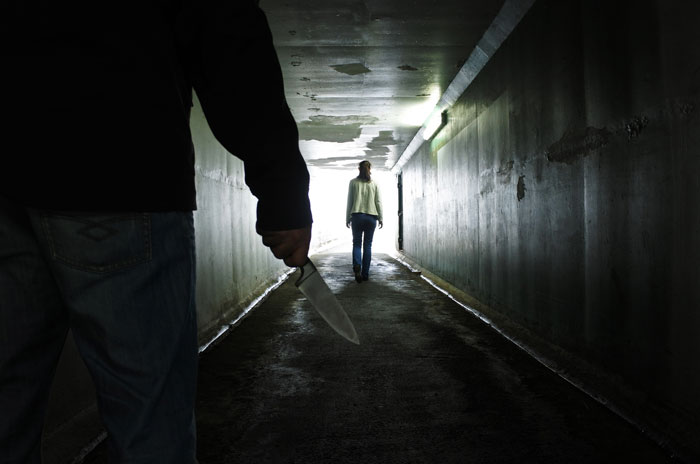 The classic word for most violent crime against innocent civilians is “street crime”.

But that’s actually not true.

I was reminded of this, again, while reading Tom Givens’ excellent monthly newsletter. I’ve taken a few classes from Mr. Givens and in his classes he explains that the word “street crime” is actually not accurate.

That’s because most violent crime — assaults, robbery, rape, and murder — do NOT take place on the streets.

“Street Crime” Is a Myth

As Tom Givens has said many times, most violent crimes don’t happen on the street because there are cars on the street and criminals don’t want to get run over. (Tom has a way of presenting facts that slap you in the face with their logic!)

Instead most crimes happen in more opportunistic areas.

These are areas where a violent criminal can get what he wants from you, whatever that may be, with the least amount of risk to himself.

Can you guess the #1 spot where you might encounter violent crime?

I’ll give you a hint, you probably go there every week and think you’re pretty safe.

“The Watering Hole” Where Violent Predators Wait For Prey

Check out what Tom Givens writes in this short but sweet snippet from his monthly newsletter:

“During classes, I often point out that one of the most dangerous places often visited by normal, everyday people is the Wal-Mart parking lot. Violent crime does not happen in a vacuum. Just like in the Serengeti, predators go where the potential prey is. Busy traffic, low visibility, minimal security, lost of hiding/staging places, and a constant flow of distracted comers and goers — it’s the perfect recipe for crime. And Wal-Mart isn’t unique. The same is true of many familiar destinations, like the grocery stores and strip malls. An article on Blomberg.com recnetly convered this phenonominen in detail. Click here to view it.”

This makes perfect sense when you think about it. As Tom has written elsewhere and explains in his classes, a lot of violent crime is the predator trying to get something from you. In this article Tom explains (emphasis mine)…

“At the time I write this, I’ve had 64 students involved in defensive gunplay. These were ordinary citizens, mostly white-collar and professionals, and only about seven percent “blue-collar” workers. The majority of our students are in sales, management, IT work, the medical field or other professional activity.

“The majority of these incidents involved an armed robbery, which I believe is probably the most likely scenario for armed self-defense by private citizen. We’re talking about business stickups, parking lot robberies at gunpoint, carjackings and home invasions — all crimes likely to get you killed. The reason the bad guy uses a weapon is to create standoff and to terrorize the victim into compliance, before closing in to take the wallet, purse, car keys, etc.

“The thug will, however, need to be close enough to his victim to communicate his desires and to easily close the distance and take the goods when the time comes. Thus the typical armed robbery occurs at anywhere from two or three steps, to roughly the length of a car — between the robber and his victim. That is, then, about three to seven yards typically, or say nine to 21′ or so. This is the distance at which most of my students have had to use their guns.

“I believe we should do the bulk of our training and practice at these “most likely” distances.”

Next to Wal-Mart and other grocery/department store parking lots, you should be on high alert when using gas stations.

They too are the perfect “watering hole” for human predators because they know you have to fill up your car at some point.

As John Murphy points out, a simple tip to help keep you safe is to notice and be on high alert if you see anyone doing more than coming or going at a gas station. They are places where people come, get gas, and go. They are not places that normal — non-predators — hang out at. Check out John’s pointers on getting gas in the video below:

Keep these facts in mind when you go about your daily life.

Violent crime is something that could happen to you. Be alert. Be aware. Be safe.