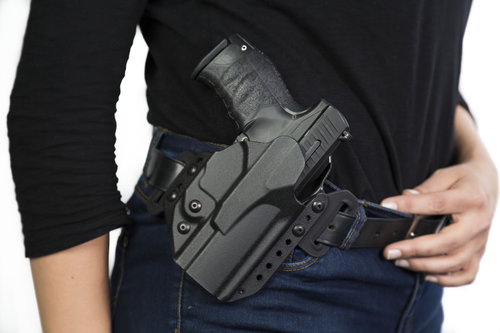 Sometimes the better part of wisdom is to know when to not telegraph everything that is going on. For example, sometimes other people simply don’t need to know why you are going someplace or making the choices you make. Or when you are carrying a firearm.

A story from Madison, Wisconsin gives us an example that could have gone very badly. From the WKOW website:

A Black Earth man who was openly carrying multiple firearms on State Street Monday had one of the weapons taken from him during an argument.

Melvin F. Bogus, 39, no permanent address, was arrested for second degree reckless endangerment, theft, possession of firearm by felon, possession of cocaine and bail jumping after grabbing the weapon from the man police say was legally carrying his weapons in the open.

Officers responded about 7:30 p.m. to a report of the suspect pointing a handgun at the victim and made contact with the victim who had been openly carrying multiple firearms.

During the argument, the suspect asked, “Why you wanna kill people.” The gunman responded saying he was armed because it was his right, and it was for protection.

It was around this time that the suspect closed distance between he and the victim, according to police.

He grabbed and yanked a holstered handgun from the victim’s body. The suspect pointed the loaded weapon at the victim, and the victim – in turn – pulled his long gun and pointed it at the suspect.

Police were called, and Bogus was arrested.

I am completely in favor of people being able to carry openly, but this situation may have been averted if the victim had simply carried concealed instead of open carried.

And maybe you should remember this story when considering how you should carry because you never know when someone is going to try to take your weapon.