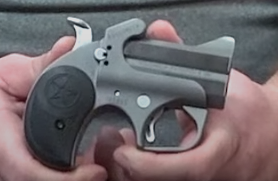 There are some interesting firearms on the market today, and firearms manufacturers are always coming out with a new twist in the hope of bringing a new firearm to your personal collection. Sometimes, those differences are new design features, and other times the differences are cosmetic. Regardless, everyone is likely to be able to find a firearm that they will like.

One company, Bond Arms, has some interesting firearms to use either as backup firearms or for you to carry when even a micro compact pistol is too big, and a writer has called one of Bond Arms’s pistols a “cyberpunk derringer.” If you’re a science fiction fan, like me, this might interest you. Tamara Keel writes,

The derringers from Bond Arms are an anomaly in the modern handgunning world, with no real parallel except maybe the mini revolvers from North American Arms. They’re well-made, the machining is first rate, they’re durable and reliable … and they were largely rendered obsolescent 20-some years ago when Kel-Tec shipped its first P32.

The Roughneck is, broadly speaking, the same size as a Kel-Tec P32, while being much heavier, only holding two rounds, and requiring the hammer to be laboriously cocked for each shot.

Bond Arms derringers are usually extremely well finished and finely machined, sporting price tags that seem completely out of proportion to their utility from a modern perspective. The MSRP on one of these shiny steel two-shooters is usually north of $500.

This led the Texas-based company to introduce two more affordable alternatives to their main line: The “Rowdy,” chambered in the 45 Colt/410 that’s most often associated with Bond Arms, and the “Roughneck,” available in 38 Special/357 Magnum, 45 Automatic, or 9mm Luger […].

The end result of all this is a gun that’s a bundle of contradictions. It can fire any type of 9mm Luger ammo you’d like with no worries about feeding due to weird bullet profiles. It’s well made and constructed entirely of stainless steel. The very idea of a 9mm Luger stainless derringer has a sort of cyberpunk vibe to it, like a hideout gun for a riverboat gambler … in space.

The long and the short of it is, because it’s a derringer (you have two shots out of it), this shouldn’t be your first choice for self-protection, but, as Keel notes, “it sure beats a handful of nothing.”

So, if you’re in the market for a backup firearm, a really small firearm, or just something different, the Bond Arms Roughneck may be worth considering.