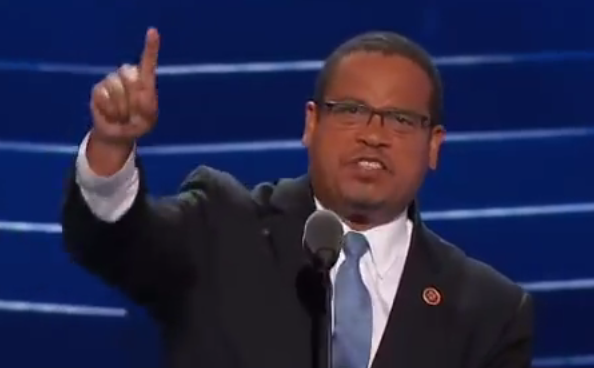 Keith Ellison checks lots of boxes for progressives, as a Muslim who once suggested that America create a black-only-nation within it’s borders, he’s captured the hearts of left. You don’t need any imagination to guess how he feels about guns.

From The Daily Caller:

Ellison has made clear that he believes the Democratic Party should not only pursue a litany of severe gun control measures, but that the party should also directly attack the Second Amendment.

During an appearance on the March 21, 2014 episode of HBO’s Real Time with Bill Maher, Ellison explained his position on firearms. During a discussion on the efficacy of gun control, Maher challenged Ellison on the Second Amendment, which resulted in the following exchange:

Maher: Then why doesn’t your party come out against the Second Amendment? It’s the problem.

Maher: Really? Because I never hear anybody in the Democratic party say that. But they say, ‘I am also a strong supporter.’

Ellison: You’ve got to check out the progressive caucus. We have come out very strong for common-sense gun safety rules.

The lawmaker went on to further characterize the type of gun control he supports by telling Maher, “what it means is that if you want to have grandpa’s shotgun, have it, but get rid of the crazy military-style assault weapons.”

Whats most intriguing here is that he comes right out and say’s that the wants to fight the Second Amendment, there’s no hiding his true agenda. Then he shifts to the more conventional, “common sense” line of argument. Saying, that he will let you can keep Grandpa’s shotgun (even though he doesn’t think the Constitution gives you the right to own it).

I’m not sure that even Grandpa’s gun is safe, since a purely cosmetic feature could transform Grandpa’s gun into a so-called weapon of war. Check out all the nutty laws Mr. Ellison has supported in the past here. Notice how basically everything is a weapon of war. He even wants to ban all gun magazines over 10 rounds, I’m pretty sure they’re also “weapons of war” in Keith-Ellison-Land.

If this guy takes over the Democratic Party, expect Democrats to double down on gun control.