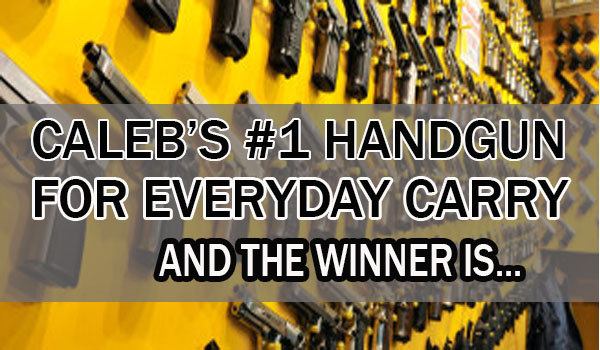 “Caleb, what do you use for every–day–carry (EDC?)”

It’s a question I get a lot from readers.

Just how does one pick the RIGHT handgun for every–day carry (EDC), not to mention defense of self and home?

Well, there are a few “wrong” answers. And there are some guidelines that, if followed, make the task of self-defense easier.

First, decide if you want a revolver or an autoloader. A semi-auto is a pistol that loads itself (hence the term “auto-loader”) and fires once every time you pull the trigger (hence “semi-automatic”).

That means you’ll see pistols referred to as both “autos” and “semi-autos” when in fact we’re talking about the same thing.  An automatic gives you more firepower than a revolver, usually.

It’s faster to reload, it’s usually flatter in profile, and there are probably more options on the market among autos than there are among revolvers.

A revolver, by contrast, is arguably more reliable, simpler to use, and easier to leave loaded and untouched for long periods of time.

While chunkier and harder to carry, its operation is more intuitive for some users, which makes it a good “starting gun” when training. If you like a heavier caliber, revolvers are typically a better platform for these, especially in “Magnum” loads.

** That, of course, brings us to caliber.

Any caliber you can shoot accurately and well, in a gun you will actually have and keep with you, is better than any theoretical caliber in a drawer or safe at home.

A good rule of thumb in a self-defense pistol is to stay away from anything smaller than .380 ACP. This is generally the smallest “concealment gun” caliber that the gun experts will tell you is adequate to put down an assailant.

But people are killed every year with smaller calibers.  You just have to be a little more careful with your shot placement and how many times you pull the trigger.  The smaller the bullet, the more times you’ll probably have to put a bullet in the other guy to make him stop doing what he’s doing.

This is where the .22 caliber “zipper” technique comes from.  You empty your magazine of .22 Long Rifle into the target, walking bullets across his vital area, in the hopes that one of those greasy little rounds will do the trick in concert with its brothers.

That said, for a “carry gun” there is no reason to go below .380. And with modern JHP (Jacketed Hollow Point) ammunition — the ballistics of the .380 are very similar to the next round up in size … the 9mm now days.

** In an automatic, the nine millimeter is a good compromise.

It has very light recoil and reasonable power. What’s more: you generally get a lot more rounds of 9mm in a magazine, giving you more chances to actually hit whatever you’re shooting at.

The .45 is a bigger, fatter, slower bullet, which tears a larger hole but also has more recoil and tends to penetrate less deeply.

Once you get beyond those two old stand-bys, theres the .40 (arguably a good compromise in pep and size between the two) and then some of the revolver rounds.

In a revolver, especially a .38 Special snubnose, you can load +P rounds (if the gun is rated for “plus pressure) for added knock-down power, or you can upgrade to .357 Magnum, which has great ballistics and offers excellent stopping power from a medium sized revolver (something with, say, a four-inch barrel).

The key is to try a few different handguns and choose the one that offers YOU, personally, the best combination of recoil, control, and ease/comfort of carry.

Across those options, carry the biggest caliber you can, in the gun that gives you the most capacity possible (i.e. rounds of ammo) comfortably.

Then just make sure you use your weapon often enough to verify that it is reliable. Keep it clean, practice with it often, and do your homework.

Choosing a daily carry and defensive firearm is as easy as picking a handgun from those elements.

So what’s the right answer…?

Abide by the guidelines above and you’ll do just fine …

And why I have your attention, let’s do a little group research project. Send me in your own pics of your personal every day carry…

And then I’ll also give you the “right answer” for me!