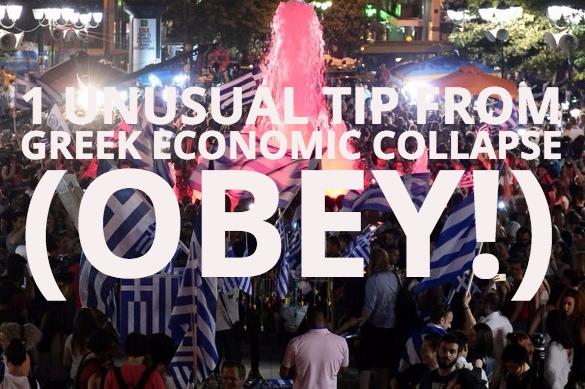 If you haven’t been keeping up with what’s been going on in Greece, then here’s a quick recap:

*** Greece is in the middle of an economic crisis  …

*** You should pay attention because this could happen in America next

To all those that say ” … it could never happen here”, you should probably just go watch cat videos or check your facebook page because you’re an idiot zombie who is too stupid to help at this point.

“Wake up people of the world and investors. Greece will come to your neighborhood very soon, maybe not this year, but next year or whenever it is, because the world is over infected…”

If you’re smart, you’ll pay attention, and see how you can protect yourself before it’s too late when this problem comes to America.

Here’s the (unusual?) thing that you need to do right now to prepare ..

What is wrong with America’s and the global financial system?

Here’s the SHORTEST version of the story I could possibly give you:

It’s all based on debt and fiat money. Fiat money is currency which derives its value from government regulation or law. In other words, the money is based on no store of value or standard (like Gold) other than the “full faith and credit” of the Government who issues it.

Now, without complicating things, just think of a normal household …

If you spend more than you make, you will go broke. Period.

These are the actual laws of economics.

The entire global financial system is now collapsing (starting with the smaller countries first) because they’re all run by governments that think they can disobey this rule of spending more than they have.

Here’s How Governments Will Always React to Economic Crisis …

The problem with modern forms of Government is they are no different than the feudal system of past. In other words, according to the “rulers” you don’t actually own your life, or your property, the Government thinks it owns it first and then “lets you” keep some of it (or rents it to you).

If you doubt this for even one moment then please buy a house with a mortage, pay off every dime, but then stop paying your property tax. Men with guns will come tell you they will put you in an iron cage for not paying to rent your land (that you thought you owned). If you resist they have the legal right to shoot you dead.

In other words, in the Government’s viewpoint, you don’t actually own your property (whether we are talking about your life, your land, your money or any other “property” you think you own) and Government retains the legal privilege to use violence against you if you resist anything they do.

If you understand that this is how the Government views its people (aka you) then their “solution” to every economic crisis becomes clear.

1. They create the problems by spending more of your money than they take (taxes)

2. They take more of your money (taxes) to create more problems

3. When the problems finally pile up and there’s a big economic crisis, they find some other way to take a LOT more of your money to try and fix it.

In 2001, in Argentina there was an economic crisis. The Government froze bank accounts and instituted the “corralito” meaning they limit the amount of money anyone can take out from their own bank accounts.

It was a total socioeconomic collapse that the country is still suffering from today.

In 2013, Cyprus had an economic crisis. They imposed a bank holiday and limited the amount of money anyone could take out of their bank account.

Then the Government decided that the best place to get money was to just take it from their citizen’s bank accounts (after all they couldn’t get their money out) — so they did a “one off” tax on all deposit amounts they called a “bail in”.

65-year-old John Demitriou retired (back) to the picturesque fishing village of Liopetri, Cyprus, with his life-savings of around $1 million living off the interest it paid from Laiki ‘Popular’ Bank and spending it on his grandchildren. He was in no hurry to invest it or spend it on big purchases.

Then, after being told just last week by his bank manager, “there’s no problem, nothing to worry about,” he so painfully notes, “I went to bed Friday as a rich man. I woke up a poor man,” as Laiki’s depositors over EUR 100,000 were devastated thanks to the bail-in.

In other words, the government of Cyprus allowed themselves to take 48% of all deposits over €100,000 in the largest commercial bank (Bank of Cyprus).

In October 2013, a 107-page report was released by the IMF (International Monetary Fund) entitled “Taxing Times”. This is what they said about the idea of a “one-off capital levy.”:

“The sharp deterioration of the public finances in many countries has revived interest in a “capital levy” — a one-off tax on private wealth — as an exceptional measure to restore debt sustainability. The appeal is that such a tax, if it is implemented before avoidance is possible and there is a belief that it will never be repeated, does not distort behavior (and may be seen by some as fair). There have been illustrious supporters, including Pigou, Ricardo, Schumpeter, and — until he changed his mind — Keynes.”

In short, when Government gets itself in trouble again, this time they’ll just take your money, it’s the new standard.

So what can you do?

The most basic personal finance advice that anyone would ever give you is to have an “emergency fund”.

What is an emergency fund? It’s typically described as an account set aside for funds to be used in an emergency, such as the loss of a job, an illness or a major expense. The purpose of the fund is to improve financial security by creating a “safety net” of money that can be used to meet emergency expenses.

Most “experts” recommend as little as 1 month to as much as 6 or even 12 months of “emergency savings” like this.

Here’s the 1 unusual thing you should do right now …

Keep at least 1 month (plus however much more you’re comfortable) in cash OUTSIDE of the banking system.

Cash is king in an emergency situation.

In Argentina … Cyprus … and now Greece … we are seeing how capital controls are ruining lives.

TIME asks “Could Americans Live on $67 per day?“. They write, “Greece’s strict capital controls have limited cash withdrawals at €60 ($67) per day, but Americans spend on average over twice that amount”

My friend Greg Ellifritz says “I would suggest having enough cash hidden in your house to provide for a full month’s worth of food, water, and utility payments for your entire family.  Hide the cash well in multiple, unconventional places.“ and I couldn’t agree more.

It’s important to note that Greece shut down access to safe deposit boxes during their crisis right now as well. So don’t think that’s a “safe” place either. You need to hold this cash, physically — hidden well and with thought given to protection against theft — totally outside of the banking system.

ATMs out of cash … banks locking their doors … and people desperate to access their life savings.

It may sound crazy … but this could happen in America.

Take the simple step of holding some cash outside of the financial system now to protect yourself.

Is 1 State Becoming The Place To Be For Firearms Businesses?