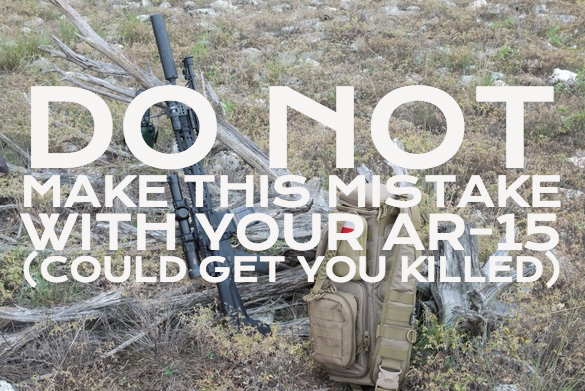 The M-16 (essentially the same as your civilian AR-15) saw its first days in service during Vietnam.

The design of the AR-15 was unlike any other rifle ever issued, so American GI’s had to quickly learn what worked and what didn’t in real combat. It was a proving grounds of sorts. And the first issued M-16’s had a LOT of problems in Vietnam.

In other words, doing certain things would cause these AR-style rifles to jam or malfunction, leaving a soldier in a firefight with a useless gun.

Not good … not good at all. It probably got a lot of soldiers killed.

There are two pieces of “doctrine” that came out of those early experiences with the AR-15 style rifle that are still taught today.

Doing one might save your life because it will keep your rifle from jamming and you can completely ignore the other one.

Doctrine #1: Never use your magazine as a brace (don’t sit it on the ground to shoot)

Doctrine #2: Never load your magazine to the full 30-round capacity.

Let’s start with the first.

Doctrine #1: Never use your magazine as a brace (don’t sit it on the ground to shoot)

It was taught that if a soldier, shooting prone or resting the rifle on something else, rested the rifle on the bottom of the magazine that it would cause the rifle to jam.

Now, I’ve heard that this is because the instructors in the ARMY at that time wanted the mags to last as long as possible, to not get beat up. I’ve also heard that the mags were crap back then — made of cheap aluminum or something like that — and that they WOULD jam if used as a brace for the rifle.

Both are probably true.

But today, you had better jam your magazine in the dirt if you’re shooting prone — it’s like a built in “bipod” that can stabilize your shot.

With today’s technology, AR-15 magazines are more than sturdy enough to use as a brace for shooting.

So you can safely ignore this piece of advice, your rifle will NOT jam or malfunction from using the magazine as a built in brace when you shoot.

Doctrine #2: Never load your magazine to the full 30-round capacity.

This one is still true.

Again, this is one of those things that there are PLENTY of rumors to how it got started, but it is just as viable today.

For one, when the bolt on your AR-15 is closed, a fully loaded 30-round mag will have a hard time “seating” — and when you do a reload like a tactical reload from this position — you REALLY don’t want your magazine to fall out after you’ve stuck it in.

Two, after the Vietnam war there have been NUMEROUS revisions and improvements to the M-16/AR-15 style platform. All good. Yet the magazines are still the weakest part of the system (this is true of ALL guns, your pistols included, a bad mag can make them malfunction).

This is something I learned from ex-CIA officer Jason Hanson, in the course of teaching hundreds of rifle courses, he always recommends not loading your 30-round mags to full capacity — and some “know it all” in class always loads it to 30-rounds …

… and they always have problems with their rifle.

So don’t take the chance, even with good, modern magazines (like Magpul P-Mags) — for reliability and being able to insert in a closed bolt — only load 28.

(Instead of counting, I’ve learned its easier to just load it till you can’t jam another round in, and then strip two off the top).

By the way, this is not limited to 30-round mags. If you run 20-round mags (for some reason, like you live in a state that hates your freedom), then load 18, etc …

1 Primary Reason To Own Guns Told In One Scary Story