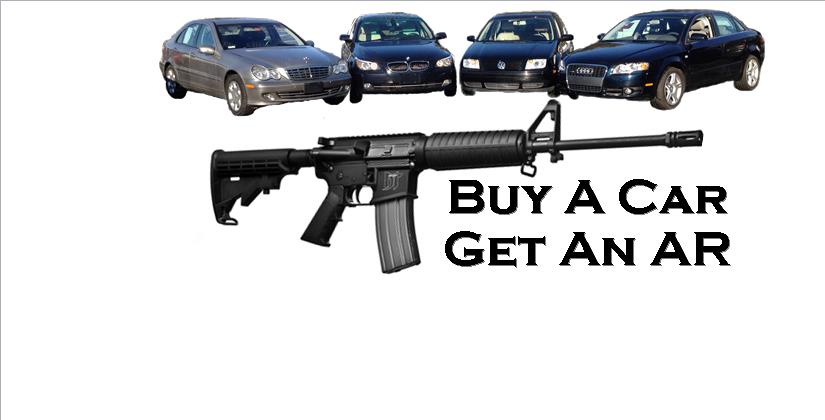 One obvious impact of the Orlando shooting is that it significantly increases the likelihood that modern semi-automatic rifles will fall under much stricter regulation, possibly even a ban. Lawmakers react quickly to these kinds of events, and they often make rash regulatory decisions based more on emotion than fact.

Americans know this well. They know what happens on the heels of tragedies like these. It’s times like this when 2nd Amendment rights get hit the hardest.

Consequently, they’ve been making a big run on AR-15 style rifles. Modern semi-auto rifles have been flying off the shelves since Orlando. People want to arm themselves with these guns before they can’t anymore.

One car dealership in New Hampshire decided to take advantage of the AR craze by creating a promotion that’s driving liberals up the wall. They’re giving away a free AR-15 with any new car!

Read more about the deal from Zero Hedge:

While car salesmen are infamous for their innovative and crafty sales methods, Hagan’s Motor Pool Auto Repair and Sales in Rochester, NH has just taken marketing to a whole new level…

Mike Hagan, the owner of Hagan’s, who as the Washington Post reports is a combat veteran who served in Afghanistan, is offering a promotion unlike any other: “Buy a car, get an AR.” The promotion is being done in conjunction with a local firearms store that completes the required background checks. Car buyers who pass the background checks and subsequently receive the AR-15 will then just send Hagan the bill afterward. “We’re giving these weapons away for responsible people that can lawfully obtain them and we’re confident that they’re going to maintain them responsibly” Hagan said of the program.

The campaign has increased sales, and thus far it is reported that Hagan has given away four AR-15s and one 9mm handgun, which is offered if customers decline the rifle.

Of course, the timing of the reporting on the program couldn’t have come at a worse time for Hagan, as the US is still digesting the mass shooting in Orlando. Hagan notes that the program, which started in May, “wasn’t started to make any sort of message or political statement. It happened well before the terrible attacks in Orlando.”

Some local residents aren’t fond of the program. “To me that’s just getting more of the nutjobs out to do even more harm to people that don’t deserve it” said Jen Marks, a local resident. However, Hagan wrote on Facebook that there has been a lot of positive feedback.

On Friday, Hagan wrote on Facebook that he’d had lots of “positive feedback” and “very little negativity coming our way.”

“Some of the negative feedback has accused me of being bigoted towards certain sexual orientations,” the post said. “Anyone who knows me, knows this is the farthest thing from the truth. I believe regardless of race, political affiliation, sexual orientation, or any of that, you have a right do defend yourself. I believe in equality, and by learning how to properly and responsible operate a firearm you make yourself equal with all who would attempt to attack you.”

Hagan told NH1-TV that he isn’t worried about the possibility that the weapons from his giveaway will be used to harm the public. He told the station that he will refuse to sell someone a weapon if he gets an uneasy feeling about them.

Hagan concluded by saying “I could worry about the same thing with a car being used to hurt other people. In the end, that kind of heinous crime is in the heart.” – that’s the type of rational statement that may warrant some serious IRS auditing the next time Hagan files his business taxes.

As you’ve probably guessed, gun control advocates can’t stand how this dealership is using Americans hunger for AR’s to sell cars. Luckily, there’s nothing they can do about it though!

Here We Go Again: Proof That Anti-2A Activists Are DOOMED To...