Home News Why This Democratic Congressman is a “No Fly, No Buy” Hypocrite…

Rep. John Lewis seems to have a bit of explaining to do. 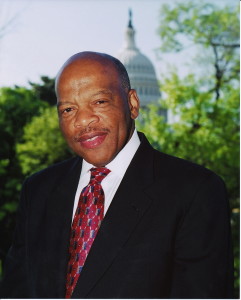 Himself and quite a few other Democratic Representatives recently tried to use a “sit in” to pass controversial gun control legislation related to the recent Orlando shootings.

In their typical fashion, they also tried to slip in a “no fly, no buy” measure for vote with their proposed legislation package.  This would prevent American citizens on the terrorist no-fly lists from buying guns.

Rep. Lewis is leading the charge to make sure this controversial gun-grabbing measure gets passed.

The problem is, Representative John “Gun Grabber” Lewis is on one of the same watch lists this “no fly, no buy” measure covers.

On the same day Kennedy revealed his flight troubles, civil rights icon and longtime Rep. John Lewis revealed he, too, had been snarled by the watchlist dragnet. According to his office, the Georgia Democrat had over the course of a year been held up 35 to 40 times. Despite reaching out to a number of federal agencies over that period, Lewis’ name had remained on a list.

Ironic huh?  A politician wants to aim gun control legislation at citizens on our watch list.  But he is on the same watch list as the “terrorists” he wants to prevent from buying guns.

I wonder how many guns are in his own private collection?

Guess Rep. Lewis will have some explaining to do if this “no fly, no buy” measure sneaks by the House.