Home Guns How To Shoot and Fight From Your Back 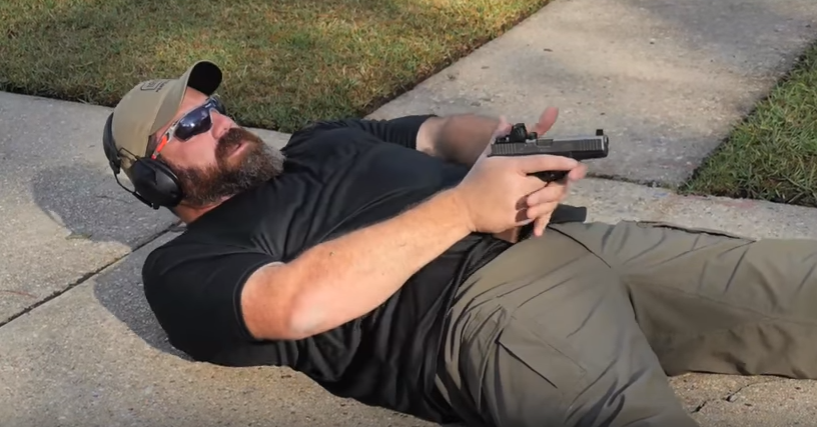 Have you ever thought about what position you might end up in if you have to defend your life with a gun?

Especially if your range practice is going to an indoor range, standing in a firing lane, pulling the unloaded gun out of a gun case, putting it on the table, picking it up and slowly firing aimed shots under no pressure or stress whatsoever.

What happens if you’re in a real life self defense situation and you fall over or get knocked to the ground? Can you shoot or fight from your back?

Why Should You Know How To Fight From Your Back

Because real life is unpredictable.

“There are several ways you can end up on the ground while engaged in armed conflict, and they will have an effect on how you proceed. One is going to the ground deliberately, such as taking low cover or bracing the pistol for a long shot. Another is grounding unintentionally, such as tripping while moving—something that happens more often than people think when trying to shoot while moving to the rear. Keep in mind that we humans do not have eyes in the back of our heads and that trying to “walk backwards” while delivering accurate fire will eventually result with our butt over-riding our feet and thus an unintentional grounding situation. The last—and most perilous—is being knocked off your feet during a close-quarters fight. Many pistol fights start out as fist fights…

“How to handle any of these situations will depend on how far away your opponent(s) is when you go down, as distance equals time and time equals life. The farther away they are, the more time you have to just get up and keep moving. But if they are right on top of you, it is likely you will have to deploy your pistol from the ground and deliver fast and accurate fire. After all, once you are on the ground, you won’t be doing any cool-looking, tactical-style shooting…you’ll have to shoot your attacker quickly, accurately and without hesitation if you want to live to see another day. Nothing else will work.”

Dave is right of course, and he would know. So how can we do this.

It isn’t rocket science by any means as I think you’ll agree but it’s something to practice.

The key thing is to NOT shoot yourself. Be VERY aware of where your legs are and where your muzzle is pointing (as you always should be).

If you have a range where you can do it live fire then you should practice this every once in a while.

If your range will not allow this type of shooting practice, then I would encourage you to role play these positions and practice them “dry fire” with a safe and unloaded (triple-check!) gun in your home or other private place.