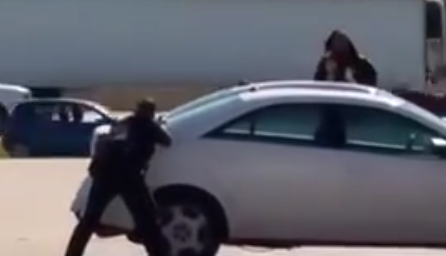 This was a pretty intense stand off between a guy who just robbed a check cashing store and the police. When the robber decided to take a hostage, things escalated.

In the video below, an Irving Police officer takes the shot of his life:

The commentary from the guy recording the incident is spot on. He deserved it! The Police aren’t going to let you retreat to your safe space when you’re holding a hostage and a gun. These kind of hostage situations don’t normally end well for the suspect. Instead of a decade or two in prison, the suspect loses his life.

Here’s the run down:

[quote_box_center]“The two officers were here quickly, within minutes and were able to engage the suspect,” he said. “They couldn’t let him leave with the hostage. … By all appearances, this was the last resort for them.”

Other store employees hid in a locked room during the robbery. They and the woman were taken to police headquarters to be interviewed.

Friday’s armed robbery was not the first reported at the store. It also was robbed Jan. 13, McLellan said. In all, about a dozen check-cashing stores across the Dallas-Fort Worth area have been robbed since November, including the Jan. 7 hold-up of a store in north Irving, he said.

This is why you train. An easy high percentage shot against a paper target, will be more difficult with an adrenaline rush and 95% accuracy isn’t good enough in a hostage situation.