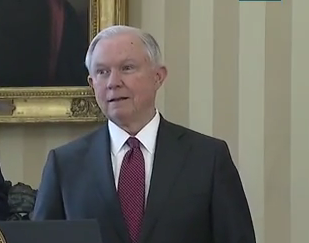 Elections have consequences. Law-abiding gun owners across America keep reaping the rewards as a consequence of the 2017 election. The 2017 windfall now includes a solid defender of the Second Amendment as Attorney General of the United States.

Jeff Sessions could be the best friend gun owners ever had in the Department of Justice. The NRA made voting to confirm Sessions a part of it’s scorecard for legislators. Good luck getting an A rating from the NRA if you didn’t vote to confirm Sessions. That means that “pro-gun” Democrats will virtually all be taking a hit in their NRA ratings.

Here’s announcement from the NRA celebrating the Sessions confirmation:

[quote_box_center]“The NRA and our five million members would like to congratulate Jeff Sessions on his confirmation as attorney general. He will make America a safer place by prosecuting violent criminals while protecting the Second Amendment rights of law-abiding gun owners.”[/quote_box_center]

Here’s how the NRA put the pressure on Democrats to vote for Sessions (from Politico):

Some of the most vulnerable Senate Democrats up for reelection in 2018 — including Sens. Joe Donnelly (Ind.), Jon Tester (Mont.) and Heidi Heitkamp (N.D.) — have expressed skepticism about Sessions but have not committed to voting for or against him yet. All three senators have enjoyed relatively favorable (for Democrats) treatment in the past from the NRA, which spent more than $50 million during the 2016 election, mostly supporting Trump and Republican Senate candidates.

The NRA endorsed Donnelly for reelection to his old House seat in 2010, and he and Tester had A and A- ratings, respectively, from the NRA during their 2012 Senate runs. The NRA barely spent any money on independent-expenditure ads opposing them or Heitkamp that year, according to Federal Election Commission records.

The new TV ad, backed by a six-figure ad national buy on Fox News and digital outlets, says that Sessions is “an attorney general who supports police” amidst dwindling respect for law enforcement.

“We were raised to respect law enforcement. They put their lives on the line for us. But now, cops are attacked. Gunned down in cold blood,” a narrator says in the ad. “[Sessions] will get criminals off our streets. And protect the Second Amendment.”

Ultimately, Joe Manchin, of West Virginia was the only Democrat to vote for Sessions. However, Manchin’s vote was important since the final tally was a close 52-47. The pressure the NRA put on supposedly “pro-gun” Democrats who voted against Sessions will continue to weigh on them in the future. Joe Donnelly, Jon Tester, and Heidi Heitkamp just voted against one of the best supporters of our right to bear arms ever, the NRA isn’t going to forget that, regardless of whatever other policy differences they had with Attorney General Sessions.