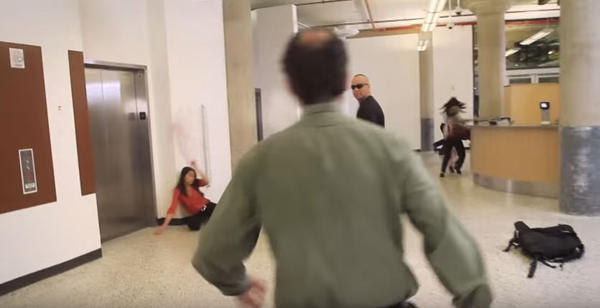 Recently, I’ve touched on a few news stories where unarmed people have fought back against an Active Killer and either prevailed or saved some lives in the process.

Then I saw some comments on those articles and was reading some other articles when I realized I needed to make sure something was clear.

But what I didn’t explain was that this first response — running — may very well get you killed.

This is all the more important because numerous law enforcement agencies have released some form of RUN. HIDE. FIGHT.® as the standard response to Active Killers.

But there are plenty of times when you should definitely not run because it will get you killed.

What Are We Talking About Here?

There have been a few Law Enforcement Agencies that have put out videos or reports on how to survive Active Killer situations. While a lot of the info is good, they recommend a standard approach of always running first, then hiding if you can’t run, then fighting only if you can’t run or hide.

While this sounds good on the surface, the information could get you killed.

Here is the youtube video created by the City of Houston, Texas and the Department of Homeland Security that has millions of views so far so clearly a lot of people have heard of this approach.

How Can Running Get You Killed?

My major concern over this advice is that if you think the first response should ALWAYS be running, then you are wrong.

Running should ONLY be your response, if you already have the distance from the killer to make running a viable option.

In other words, your distance from the threat could be one of the most important variables as to how you should respond.

If you are in another room and the shooter can’t see you, then by all means run away from the threat.

But if you are in the same room as the attacker, and he is about to shoot you, running will most likely get you killed.

The sad part is, the Ready Houston video actually shows you exactly how running can get you killed. Let me show you screenshots.

The RUN. HIDE. FIGHT.® video starts with a scenario where the active killer walks into an office building, nobody is paying attention, and he pulls a shotgun from his bag …

The woman next to the security guard screams and watches the killer rack another shell into the shotgun before shooting her as well. Then the killer turns around to face the rest of the room.

At this point, shots have been fired, the woman next to the murdered security guard has screamed — other people in the room are alerted — and have started to run away from the threat.

Now, Here’s My Problem With The “Rule” Of Running As a First Resort

We see a guy walking into the room, unaware or not yet processing the situation …

The killer looks over his shoulder, sees the guy coming into the room, and then turns to face him with the shotgun.

Here is the moment of truth. You can see the guy finally realizes that there is a killer looking at him, he has a gun, and he has bad intent. You can even see the beginnings of a “startle response” action with his shoulders shrugging up — he’s surprised and realizes his life is in danger.

At this point, it’s the fight or flight response we all have heard so much about. So what does he do?

He turns around and tries to run.

And of course, he gets shot in the back by the killer.

If You Come Face-To-Face With The Killer, Running Is The Wrong Move

In my opinion, charging the attacker would of been the correct answer in that situation.

Would he have still gotten killed?

He did get killed by running. Further, he reduced his chances of survival to zero by turning around and running. You can’t outrun a bullet in this case.

Take a look at the moment this guy who chose the WRONG answer of running again (because he was already being targeted and in the process of being engaged by the killer).

Look behind the shooter, the guy I drew an arrow at. He is using the running strategy correctly because A) the killer can’t see him and B) he’s actually further away from the killer.

Now, ideally it would be nice if you didn’t have to charge a man pointing a gun at you.

The truth is: that is really bad situation. In this particular scenario, the guy has a shotgun too. That really sucks because shotguns are pretty powerful (the fact is, if this guy had a handgun, you have a much, much better chance of charging him and surviving even if you were shot multiple times).

But it is what it is.

And the only other responses are to 1.) Run (which will get you shot in the back as you just saw) or 2.) Hide, which is impossible because he saw you, he is pointing the gun at you, and you are nowhere near cover or concealment.

Inside of 5 Yards, You Should Sidestep and Then Charge.

This sounds silly, and it seems silly, but it should work just as well if you’re unarmed as it does if you’re armed.

The pictures below are from actual surveillance video footage in a gas station. This is one of Tom Given’s students, a little old Asian lady (50+ yrs old at time of incident) with only a little training, who when she had a criminal shove a gun in her face simply sidestepped, drew her gun and shot him in the chest.

Here you can see the armed robber trying to hold up one of Tom’s graduates from about 3-5 steps away (Tom says it was only about 15 feet from the door to the counter in the store).

Tom’s student responds by sidestepping to the left as she draws her gun, presents it at eye level, uses both hands and shoots him center mass (you can see the attacker reacting from the shot in this picture).

This works because of the concept of “tunnel vision” that the criminal is experiencing because his physiological condition is in fight mode.

Inside of 5 yards, simply sidestepping puts you outside the “zone” he is intensely focused on and then — as you see in this case — you have time to draw a gun.

In our example, fighting unarmed against an active killer, if you’re this close, then sidestepping should buy you some amount of time to start charging into the killer.

Inside of 5 yards, at closer distances, sidestepping can help. Don’t bother at longer distances however because the distance gives the attacker more vision, just simply charge.

Ever Heard of The Tueller Principle?

There is a concept, usually demonstrated through a drill on the range to teach police officers the idea of “how close is too close” to be near a dangerous suspect before drawing their firearm.

Essentially a Police Officer named Mr. Tueller took the average time for his officers to draw from their holster and shoot a man sized target at seven yards which was 1.5 seconds — and then decided to see how long it would take someone to cover the same distance (7 yards/21 feet).

“So we had one recruit officer play the role of the “bad guy” and another played the role of the “startled officer.” We put them 21 feet apart, and when the bad guy role player decided to start his attack, we started the stopwatch, and when the bad guy made contact with the good guy, we stopped the watch. I was quite stunned to discover that the time was roughly 1 1/2 seconds!

“Then we tried the same exercise with everyone available in the class – some younger, some older, big and small, male and female – and all of them could run that seven yard distance in about 1 1/2 seconds. Of course, this was before Simunitions® or Airsoft®, but later we did test it with dart pistols. What we found was that if you’re ready and if everything goes perfectly, you might get the gun out and get a shot off before the bad guy role player makes contact…”

What is my point?

Even at about 21 feet away, roughly 7 yards from a guy with a gun, you can charge him and be fairly certain you’ll be able to make contact in 1.5 seconds or less.

In the example we’re using — in this scenario — the killer doesn’t look any further than about 20 feet away.

In his mind, he expects the victims to run from him in terror. He doesn’t expect a direct counterattack.

Having a victim charge him instead — puts him into reactive mode — in other words he’ll have to react to your attack instead of being the aggressor.

Granted, that doesn’t buy you much time, but it certainly helps.

Either way you look at it, my point is simply that even a direct charge may be more effective than you think.

And no matter what, it’s infinitely more effective than simply turning around and running and giving the killer all the time in the world to shoot you in the back.

So to wrap this up …

Running can be a good tactic … but … it can also make you an easy target.

There is no possible way that we could talk about every possible scenario you could find yourself in during a life or death situation.

In my recent article about the Paris train terrorist attack, had the three men decided to run when the killer’s AK-47 jammed instead of attack — I’m nearly 100% sure everyone in the train would of died because there was nowhere to go. They were in a “steel tunnel of death” with only one direction to run and nowhere to escape, they would of all piled into each other, trampling each other trying to get through the bottleneck of the exit door to the next train cart, while the shooter shot them all like fish in a barrel (he probably would not have even needed to aim, just point the gun at the mass of people and pull the trigger).

Instead, the brave men that responded saw the killer pause for an instant and attacked, holding him down, beating him, and choking him out before restraining him saving potentially dozens of lives.

My only point is that you should only run if it is the correct time to run.

If the killer sees you, or is pointing a gun at you, and you’re anywhere within 20 feet of the guy, your best bet is probably to attack him because running and hiding are off the table.