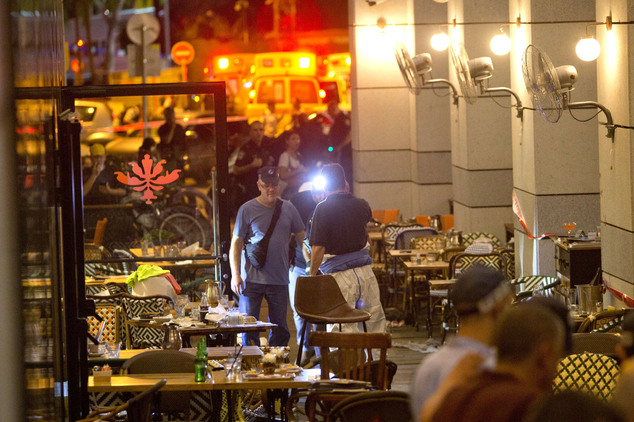 But many politicians and really ignorant people (oxymoron?) still seem to think that’s the case.

But the truth is that terrorists will always get around any and all useless “gun control” laws. Today, I want to share with you some surprising info on how the terrorists in a Tel Aviv shooting did it.

There was a recent shooting in Tel Aviv with a video online. It appeared that much of the shooting stopped because of malfunctions with the terrorists weapons.

That’s most likely because they were home made.

Hat tip to this story I found on TheFirearmBlog …

Earlier this month two gunmen burst into a restaurant in Tel Aviv’s Sarona Market, killing four people and wounding six more. The death count could have been much higher had one of the attacker’s weapons not reportedly jammed, CCTV footage appearing to show one of the gunman throwing his weapon down in frustration.

As with a number of earlier attacks this year including the shooting and stabbing of Israeli checkpoint guards at Jerusalem’s Damascus Gate, improvised firearms were used. Weapons of this type are known locally as ‘Carlo pistols’ due to their crude tubular construction reminiscent of the Swedish Carl Gustaf M45 submachine gun and Egyptian made Port Said / Akaba derivatives which are common to the region. The examples used in this latest attack look to be much cruder than usual, appearing to use homemademagazines. Other models widely seized by Israeli Defence Forces appear reasonably well made and use 9mm Uzi magazines with AR / M4 pistol grips and butt-stocks sometimes fitted. As this video shows, small SMGs of this type have an extremely high rate of fire which combined with poorly fabricatedmagazines likely contributed to a failure to feed in this case. Efforts by terrorists and rebel groups to produce homemade submachine guns isn’t anything new. Small workshops in Northern Ireland during ‘The Troubles’ churned out hundreds of crude but entirely functional weapons which were used in sectarian killings by Loyalist paramilitary groups. In the 1970s various rebel groups across South America including Argentina’s Maoist ERP set up factories to produce homemade submachine guns including close copies of the Swedish K / M45. Security forces In Colombia have in the past closed down factories operated by FARC which produced versions of the British 9mm STEN as well as MAC-10 submachine guns. We’ll likely continue to see more attacks perpetrated with this type of weapon in future, especially in areas in which the smuggling of conventional arms may present difficulties, thus leaving a void for entrepreneurs with drills and hacksaws to fill. Like I Said, Even If All Guns Disappeared Tomorrow, Terrorists Could Still Simply Make Them

So what’s the solution?

If all the bad guys have guns … don’t be a good guy without one.

Are you surprised that terrorists are now making guns? I’m a little surprised, considering the terrorists who attacked Paris just traveled into the country with a bunch of AK-47’s. (Even though — of course — Paris has some of the world’s most strict gun control laws)

How Anti-Gunners Lie With Statistics