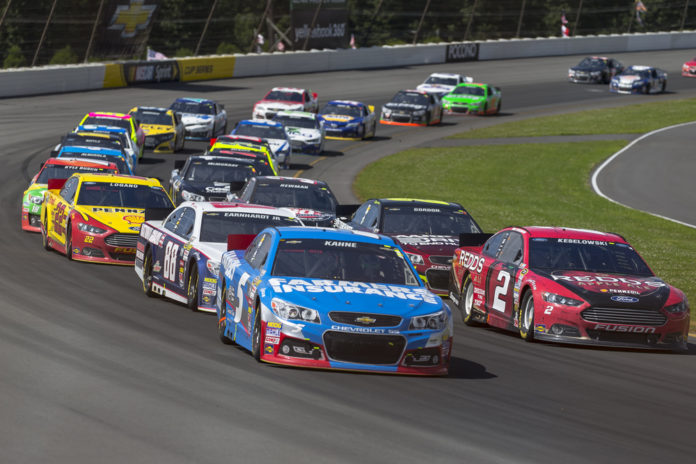 Oh, say it isn’t so! Sadly, some of our most venerable and treasured institutions have begun to slide down the slippery slope of believing the anti-gun rhetoric being spouted by celebrities and anti-gunner politicians.

It’s finally reaching a breaking point. Universities have bought into it. Some churches are buying into it. And, now, I hate to even say it, but, even NASCAR is going anti-gun.

Actually, I’m completely serious about that. NASCAR is doing something which is bound to anger a large portion of their fan base (not a good business decision, in my opinion). Ryan Saavedra writes,

The National Association for Stock Car Auto Racing, otherwise known as NASCAR, has reportedly started to take a “gradual shift” on its stances surrounding the Second Amendment.

The revelation comes after multiple gun companies have said that NASCAR, which has a primarily Republican base, banned them from running advertisements that feature guns.

“Dark Storm Industries said an ad it submitted featuring one of the company’s AR-15s was rejected and online retailer K-Var Corp. said an ad featuring an AK-47 and 9mm handgun was also rejected,” The Washington Free Beacon reported. “Both said a NASCAR advertising agency solicited ads from them for NASCAR publications. They submitted ads but were told NASCAR would not accept them.”

In a statement, Dark Storm industries wrote on Instagram:

NASCAR decided to turn their back on their customer base, joining the likes of Yeti, Dick’s and Under Armour. We were approached by a NASCAR publication eager to earn our business, but after submitting our ad it was immediately rejected, stating that we cannot depict “assault weapons”… whatever those are. We resubmitted the ad after adding a large ‘CENSORED’ bar over the rifle, with a tag reading “This publication rejected our ad.” This too was rejected by NASCAR. They said they did not like that we called them out. We resubmitted a third time, with a tag line reading “Visit www.Dark-Storm.com to find out why!” This was again rejected. They did not like the words “FIND OUT WHY.” As we have learned, NASCAR has made a “gradual shift” but this doesn’t seem very gradual to us. It seems as though NASCAR has turned their back on the overwhelming majority of their fan base in the most embarrassing way possible. #nascar

Other companies have reported similar rejections from NASCAR.

However, not everyone is taking this lightly. For example, radio host Mark Walters wrote,

Go ahead NASCAR, try to fill the stands with a bunch of David Hogg, Moms Demand Action, Everytown for Gun Safety, urban, progressive, skinny jean wearing, soy sipping, man-bun wearing, Antifa loving, gun-hating socialists. I won’t be around to see how that turns out for you.

It will be interesting to see how this turns out, but it seems likely that this can only have the same effect on NASCAR’s profitability that a similar action had on Dick’s Sporting Goods: a nosedive in their profits.

NASCAR needs to wake up and realize that a huge part of their fanbase are gun owners. To ban gun ads on NASCAR is to alienate a majority of people who support NASCAR. NASCAR’s management had better wake up and smell the coffee before the organization becomes a shadow of its former self.

This Pistol May Not Be Great Choice For Your Everyday Carry