Home Uncategorized 8 AMAZING times a Good Guy fought back against an Armed Robber... 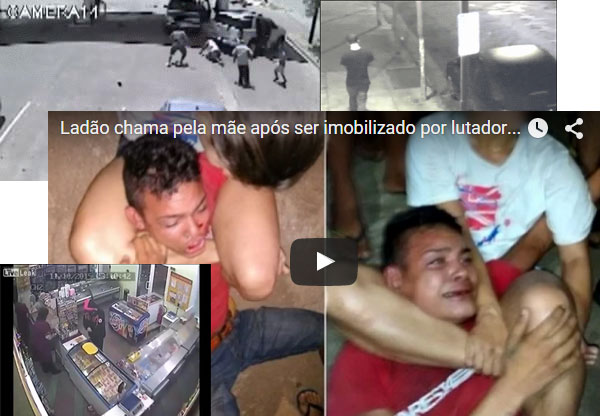 Because you can go absolutely crazy if you don’t look at the lighter side of life every once in a while, today I want to present you with EIGHT amazing times that a good guy fought back against armed robbery and won!

The truth is, contrary to what the mainstream media and state want you to do — which is just to roll over and be a good victim — fighting back is often a GREAT solution when your life is threatened …

As we’ve discussed before in these digital pages, Jeff Cooper notes in his Principles of Personal Defense (emphasis mine) …

“…On a realistic note, I can point out that in every single successful defense against violent attack that I know of and I have studied this matter for nearly three decades –the attacker was totally surprised when his victim did not wilt.

“The speed, power, efficiency, and aggressiveness of the counterattack varied greatly, but the mere fact of its existence was the most elemental component of its success.”

Watch these awesome gifs of live footage showing actual attempted armed robberies to see how when the good guy fights back it catches the attackers totally off guard.

This guy was minding his own business inside an establishment and as soon as he finished purchasing something a guy comes in waving his gun.

I love how he pivots towards the threat, doesn’t back up one inch and immediately closes the distance into clinching range and proceeds to drag him out of the store.

I don’t know the story here, but I guarantee the would be robber didn’t see that one coming!

#2: Robber with knife gets a chair to the face!

This dummy, brandishing what looks like a box cutter, thought he was going to come across the counter to mess with the store clerk — the guy behind the counter gave him a Professional Wrestling style folding aluminum chair to the head and stopped him in his tracks!

This is one of my favorites of all time as the good guy is making a tons of mistakes walking down the street, at what looks like night time, with all his attention focused on what appears to be his cell phone.

He doesn’t notice the hoodlum run up behind him and shove a pump shotgun in his face. But what the good guy does next totally catches the bad guy by surprise, instead of cowering in fear the would be victim gets pissed and snatches the shotgun out of the bad guys hand and attempts to beat him with it! I love this!

#4: Old man at ATM takes a chair to armed robber!

Some stick up kid thought he was gonna rob an old man who was watching his buddy’s back at the ATM. The old man didn’t like the sound of that so he grabbed the nearest — again — aluminum folding chair and start trying to take the robbers head off!

NOTE to self: study professional wrestling moves with aluminum chairs!

The store clerk was already fighting back against this robber when the guy in the wheel chair rolled up (pun intended) and decided to rear-naked-choke him out.

Unfortunately, the guy slipped away, but the wheelchair guy decided to hang on and it looks like he applied a different choke while the other store customers gave the robber some nice shots to soften him up.

#6: Combat Vet Sticks His Gun In The Bad Guys Mouth

Talk about cool calm and collective. And this is the only ARMED good guy on our list. This robber decided to pick a combat vet with a couple tours in the Middle East under his belt as his victim. Wrong choice.

When the clerk sees the bad guy’s gun, he calmly uses his support hand to block the presentation of the robbers gun — while he simultaneously draws his own gun and sticks it into the mouth of the bad guy who was probably making some stupid verbal threat at the same time.

I heard the cops later found the guy, because it was easy to swab the good guys barrel for DNA!

#7: Dumb Robber Drops His Gun And Store Clerk Picks It Up For Him!

This idiot tried to keep his gun concealed until the last minute and fumbles his draw stroke so bad he drops the gun right on the counter in front of the store clerk who promptly picks it up and aims it at him.

About that time the bad guy remembered he had a pressing appointment and ran out of the store double time!

#8: That Time Roundhouse kicks to the face took out multiple car jackers

Most people will tell you that high kicks or kicks in general “don’t work on da streetz” — but this store clerk, Mayura Dissanayake, who was a part time MMA fighter didn’t care.

He saw his buddy getting car jacked in the parking lot so he ran outside, and I quote from his TV interview, “The First Guy I Saw I Just Kick Him In The Face” which is the best quote ever. If I ever die, I want that put on my tombstone. He continued “… then I punch the other guy”.

Sounds simple enough! Then the car jackers tried to get away …

There were multiple car jackers — most ran away to the getaway car — but one of the guys was a slow runner which allowed Dissanayake to knock him down with a hook. Then he kicked him in the face a couple more times to knock him out.

Whenever Someone Tells You That Fighting Back Against Bad Guys Doesn’t Work, Send Them This Page

Let them see for themselves that with just a little bit of “can do” American attitude, the good guys can beat plenty of bad guys.

As a final reminder that actually training makes you even more likely to win in a situation like this (think about how many of the guys you just saw probably had training first), I’ll leave you with this video of the time a FEMALE MMA Fighter in Brazil, Monique Bastos beat the crap out of a stick up kid in Acailandia, Brazil:

“I was going to my jiu-jitsu training when they arrived on a motorcycle and said they wanted our phones,” Bastos told MMAFighting.com. “I tried to hold my phone, and I realized they were not armed. When they tried to escape, I lifted the rear wheel of the bike and they fell on the ground. The guy who took my phone ran away, but I was able to get the other one.”

She then rear naked choked the one guy and took him to the ground, where she put a triangle lock on him from behind (normally his face would be facing inwards to her crotch) — then she held them there while waiting 15 minutes for the police to get there.

Oh, and this type of stick up kid armed robbery stuff is kind of common in Brazil, so this wasn’t the first time this girl stopped a robbery.

“I’ve been through this a few times before, and it’s the second time I fought back,” she said. “There were two guys, and they were using knives, but I was able to use my jiu-jitsu and get my phone back. It’s a huge risk, but I did it to defend myself and my friends, so I used what I learned.”

God I love it.