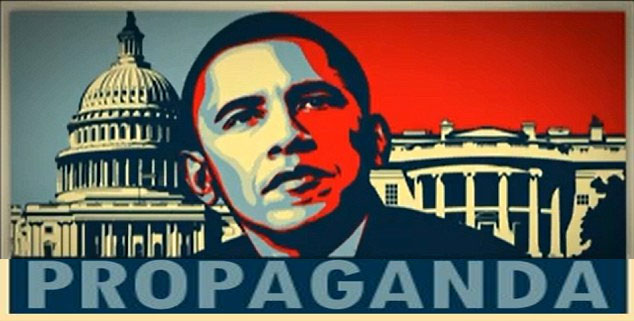 Sadly, on Friday November 27, 2015 — while much of America was enjoying the start of a Thanksgiving weekend — a crazy man decided to go on a killing spree in Colorado at a Planned Parenthood center.

After a 6 hour standoff, with three people dead and at least nine wounded, the accused killer finally surrendered to a SWAT team.

The next day, President Obama wasted no time politicizing the event and again spoke against so-called “gun violence”.

Let’s talk about why “Gun violence” is actually only a propaganda buzzword and why Mr. Obama is only using it to manipulate the population because he clearly doesn’t actually care about innocent victims of violent crimes.

“Gun Violence” Is a Made Up Propaganda Buzz Word

Attorney Robert Shapiro is a well known lawyer for the rich & famous. He put together the “dream team” that kept OJ Simpson out of jail and he is known for his creative application of English in the legal profession …

In 1990, he was called on by Marlon Brando to defend Brando’s son Christian who had admitted to shooting his sister’s fiance–a potential first degree murder charge.

Shapiro describes how he beat the case …

“The phrase does not exist in law. It came out of my mouth and I repeated it hundreds of times over the course of three months. And it stuck. One-time use. One-time need.”

The phrase “accidental manslaughter” was never used before or since, but it served to change the conversation in the minds of the jury of that case.

It was literally propaganda that mentally associated the idea of “accidental” with the “manslaughter” charge in this case.

In the same way, President Obama and every anti-gun politician uses the words “gun violence” whenever talking about crazy murderers to get people to mentally associate the idea of “guns” with “violence” and horrible murders.

Then President Obama always makes the quick connection to wanting to ban semi-automatic, magazine fed rifles such as the AR-15 by calling them “weapons of war” and acting like they’re a real problem.

On Saturday he said, “… we have to do something about the easy accessibility of weapons of war on our streets to people who have no business wielding them. Period. Enough is enough.”

Let me quickly point out the hypocrisy of Mr. Obama claiming that he does not want so-called “weapons of war” on our streets because he certainly is OK with the police having these weapons on American streets as the meme below so eloquently points out: 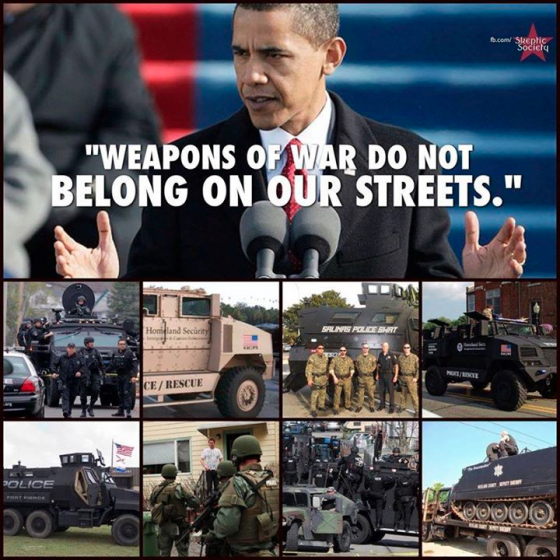 Because I want to make the point incredibly clear I’m going to continue kicking the dead horse and point out that President Obama and every other anti-gun politician is hypocritical for only wanting firearms to protect themselves, but not everyday, regular Americans like you and I.

Actual Crimes Committed With Rifles (of any type) Are INCREDIBLY Low

Notice the use of the words “weapons of war” and even the commonly used description “assault rifle” are propaganda words anti-gun politicians use to demonize semi-automatic rifles like the AK-47 and AR-15 that are available to civilians like you and I.

The fact is, using the data from the FBI Uniform Crime Report, we find that rifles are used so little to commit murders that they are barely a blip on the statistical radar.

As you can see, murders using rifles of all types is so low you wonder why President Obama would make a statement about it at all … 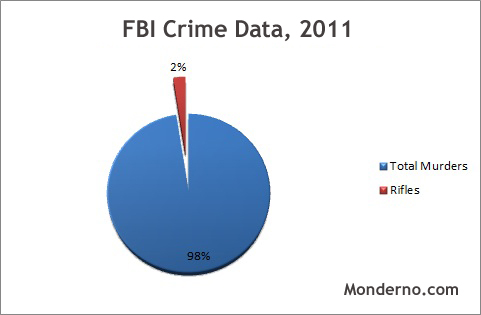 It’s important to note that the so-called “weapons of war” — the semi-auto AK-47’s and AR-15’s that Mr. Obama would like to ban — are only a subset of the “rifle” category of murders the FBI collects. This category would ALSO include hunting rifles and any other rifle ever used in murder.

Yet what do we find?

Once again, despite the President’s attempts to politicize every tragedy such as this … and despite a complacent media that jumps on these stories because “if it bleeds it leads” … not only are murders by rifles extremely rare, mass shootings using them are EXTREMELY rare.

Here’s a little bit of perspective for you: 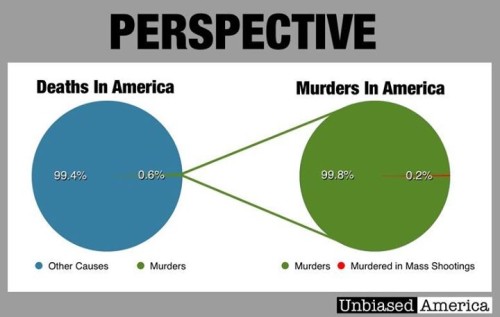 The truth is that murders by rifles are such a low, low number that if a person actually cared about stopping violence they would look somewhere else.

And mass shootings — the type that Obama loves to politicize by his own admission — are even more rare.

To put it all into perspective, the following infographic needs to be shared far and wide:

In short, according to the 2011 FBI Uniform Crime Report, FIVE times as many people were murdered with knives in 2011 than with rifles of any type.

Take a look at this headline from the Daily Mail, reporting the horrible murder-suicide of three people during the same Thanksgiving holiday weekend. 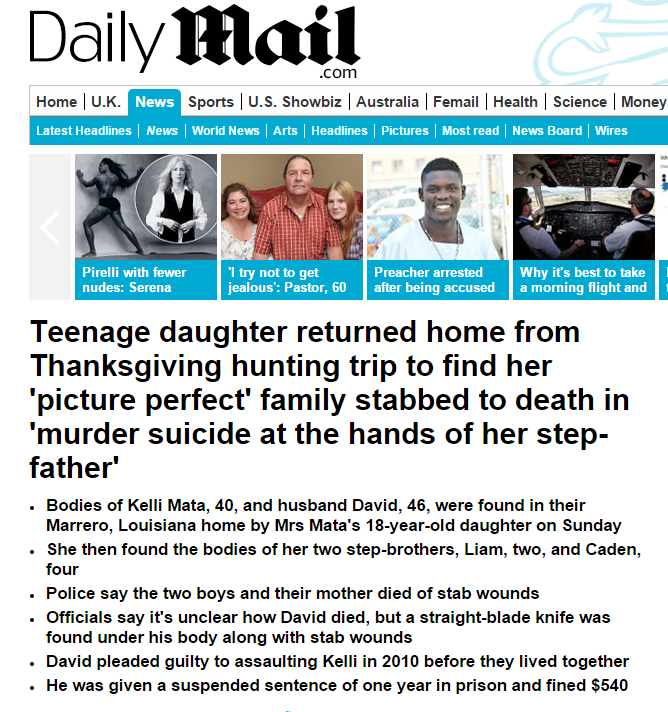 Yet, I can 100% guarantee that President Obama won’t issue a press release and demand tougher “knife violence” laws.

The White House will not tweet that this type of murderous activity is intolerable and that “enough is enough”.

He only cares about his agenda, which is to ban firearms — specifically AR-15’s and AK-47’s and other semi-auto rifles (though I’m sure he would love to ban all firearms).

Not to put too fine a point on it, but President Obama’s drone strikes have most likely murdered way more people in his time in office than the Colorado shooter.

The Bureau of Investigative Journalism actually keeps tabs on the Drone Strikes and published this in January of 2015 (emphasis mine):

“At least 2,464 people have now been killed by US drone strikes outside the country’s declared war zones since President Barack Obama’s inauguration six years ago, the Bureau’s latest monthly report reveals.

“Of the total killed since Obama took his oath of office on January 20 2009, at least 314 have been civilians, while the number of confirmed strikes under his administration now stands at 456.

“Research by the Bureau also shows there have now been nearly nine times more strikes under Obama in Pakistan, Yemen and Somalia than there were under his predecessor, George W Bush.

“And the covert Obama strikes, the first of which hit Pakistan just three days after his inauguration, have killed almost six times more people and twice as many civilians than those ordered in the Bush years, the data shows.”

Keep in mind — no matter how you feel about the effectiveness of these drone strikes in actually eliminating suspected terrorists — every time there is “collateral damage” in countries like this, it inspires more people in those countries to join the Jihad against the West.

(If someone blew up your grandmother, or your niece and nephew, you’d be pretty pissed too and be looking for a way to hit back. The CIA has labeled this common behavior “blowback”, but that’s outside the scope of this article.)

“Gun Violence” is a made-up word that President Obama and the media like to use because its propaganda that gets people focused on guns, not on actual violence …

Mr. Obama claims that “weapons of war” don’t belong on our streets, but he is clearly comfortable with those weapons of war being used to protect himself on these same streets just not for you to protect yourself or your family.

Additionally, the actual number of deaths by rifles — of any type, not just so-called “assualt rifles” (another propaganda word) — is so low it’s laughable that it’s a political issue at all.

In short, about FIVE times more people are murdered with knives than any type of rifle (based on FBI statistics for the year 2011).

Finally, if Mr. Obama was actually concerned about the victims of violence he would care about ALL murders, not just those extremely rare mass shooting events involving a semi-automatic rifle.

Additionally, I would assume the President would care about the hundreds of civilians he has murdered with the drone strikes he authorizes.

Instead, President Obama simply wants to politicize every shooting to push his agenda to disarm the American people.

Not Worried About Socialism? If You Value Your Guns, Your Should...