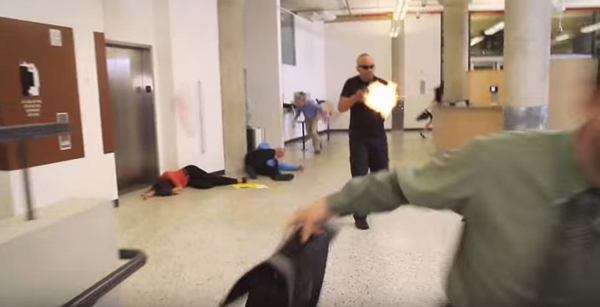 If you listen to the “news” after every mass murder tragedy, there seems to be some type of debate as to whether an armed citizen on the scene would help.

Today, I would like to end that debate. Because there is no debate.

100% of the time when there is an armed “Good guy” on the scene of a mass murder situation, the body count is dramatically lower.

There Is No Debate: Armed Citizens Have and Will Continue To Stop Active Killers and Mass Murderers

It is really infuriating to read headlines like “Little Evidence Of Armed Civilians Stopping Shooters” or “Is It True Armed Civilians Have Never Stopped a Mass Shooting?”

Then you have snarky news reporters who often ask during debates with pro-gun guests “Can you give or think of one example where armed civilians stopped a mass killer?”

Unfortunately, the truth is not widely published but it should be.

This is my attempt to help get the truth and the facts out there.

Before we get to the data, it’s important to understand why this is unequivocally true.

In A Mass Murder/Active Killer Situation, The FASTER The Defensive Response — The More Lives Are Saved. Period.

Way back in 1999, 34 people were shot at Columbine High School while they waited on police to arrive and stop the two active killers.

At Columbine, two officers exchanged fire with one of the teenage gunmen just outside the school door, then stopped — just like they were previously trained to do — to wait for a SWAT team that would make entry.

During the 45 minutes it took for the SWAT team to assemble and go in, the two killers shot 10 of the 13 people they killed that day.

That new type of threat — the active killer who doesn’t want hostages, no demands, and is just intent on getting a high body count — taught police not to wait.

After Columbine, police across the country developed specific “active-shooter” training for these types of situations.

In short, responding officers are taught to rush toward the gunfire (ignoring victims if necessary) to aggressively attack the active killer.

It had been proven over and over again that most these types of killers either give up or kill themselves when confronted with any type of resistance.

Suddenly the killer is not in control. Now he has to defend his own life which takes his mind off the killing.

For all the same reasons, immediate confrontation from a civilian on the scene is the MOST effective strategy to save lives.

The chart below comes from Last Resort Firearms Training and was posted at Active Reponse Training: 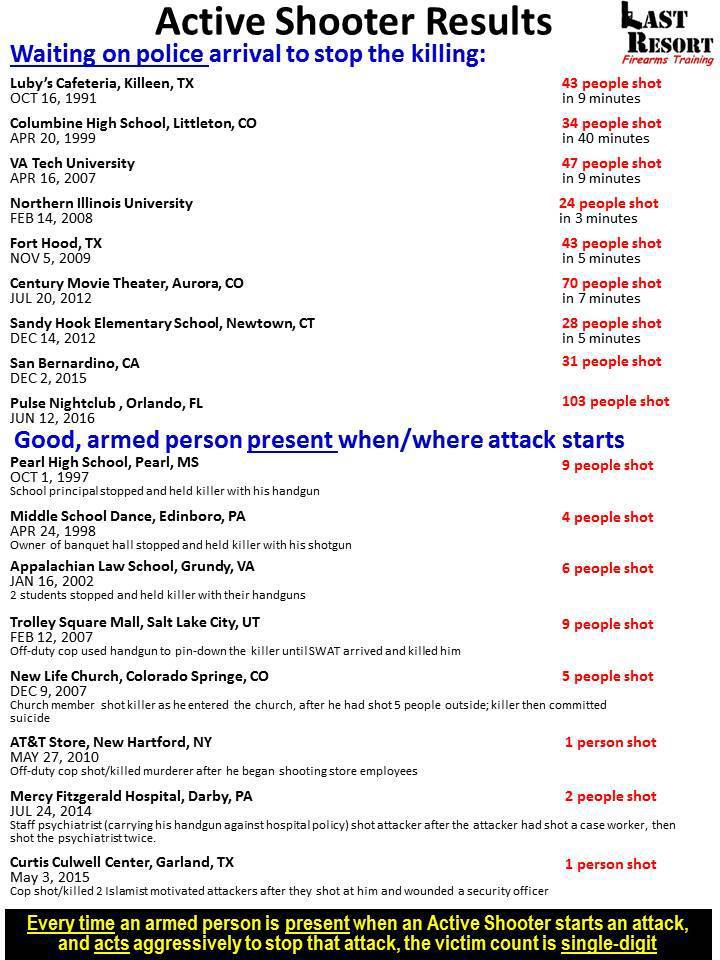 It’s an excellent article which you should read yourself, but I’d like to share just a few highlights from the data here.

There are two major points to note.

“-28 people were shot inside Sandy Hook Elementary School while they waited on police to arrive and stop the killing.

– 31 people were shot inside a San Bernardino, CA government building while they waited on police to arrive and stop the killing.

-34 people were shot at Columbine High School while they waited on police to arrive and stop the killing.

-43 people were shot at Fort Hood, TX while they waited on police to arrive and stop the killing.

-47 people were shot in an academic building at Virginia Tech University while they waited on police to arrive and stop the killing.

-70 people were shot inside a movie theater in Aurora, CO while they waited on police to arrive and stop the killing.

-And now, 102 people have been shot in a nightclub in Orlando, FL while they waited on police to arrive and stop the killing.

In addition to mass casualties, all of these crime scenes have one thing in common. They are all places where law prohibited law-abiding adults from carrying handguns for self-defense. This made everyone present a compulsory victim, a sitting duck, a fish in a barrel, once the killer chose that location and started his attack. It forced everyone to wait on police to arrive and stop the killing. The pattern and trend is obvious. A LOT of people can be shot in the time it takes police to arrive after a mass public shooting begins. The norm seems to be between three and eight minutes.”

100% Of The Time An Armed “Good Guy” Was Present, The Body Count Is In The Single Digits!

This is probably the most incredible fact, that you should share far and wide:

“In every single active shooter attack where a good, armed person was present when the attack began and acted aggressively to stop the killer, the body count was less than 10, single-digits. Every time. 100%. Having a good, armed person present who will act to stop the killer, whether it’s a cop, armed security guard, or armed citizen, ends the attack in the first 1 – 2 minutes. This prevents the killer from having the time needed to amass a high body count. Waiting on police to arrive and stop the killing gives the killer plenty of time to shoot a lot of people.”

There is no debate.

Swift, immediate action is needed to respond to the active killer threat and the people closest to the threat are the ones on the scene already.

If one of these people fights back, then the body counts go down. Period.

The facts need to get out there.

Ron Borsch in his study of what he calls “Rapid Mass Murder” attempts — four or more people being killed in less than 20 minutes in a public location — says that citizens, mostly unarmed, are credited with stopping a full two-thirds of these killings.

The key to it all is TIME.

When a crazed murderer decides to go kill a lot of people, WAITING for police or someone to come save you is not the solution. 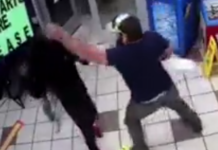