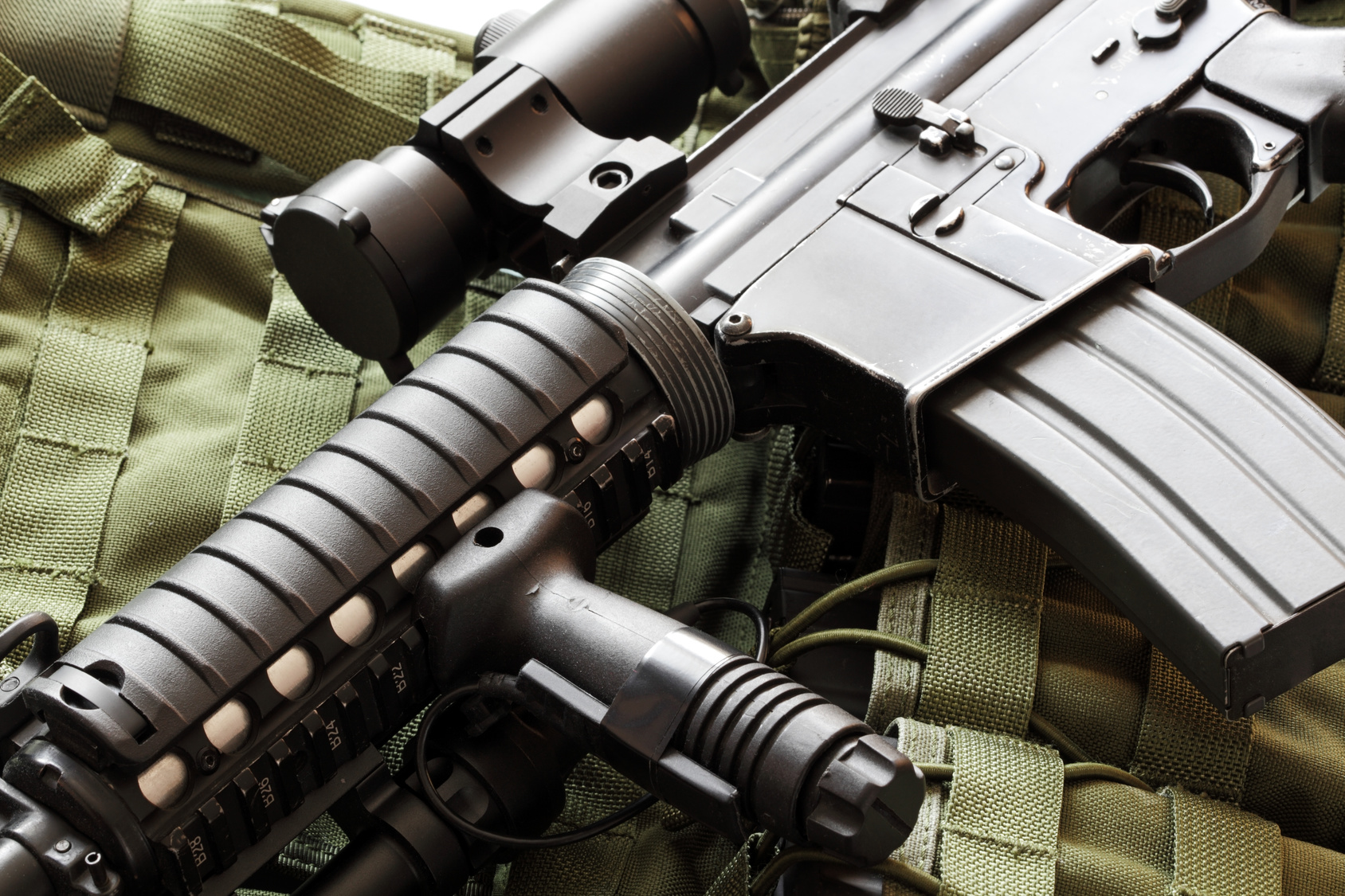 After yet another tragic shooting, the AR-15 is being demonized even further by liberal lawmakers. They claim that the modern semi-automatic rifle is the source of all evil when it comes to gun violence, and they’re spinning their own narrative about the history and purpose behind this type of gun.

Some of the false claims and misconceptions about AR-15 style rifles include:

Each of these things are patently untrue, along with all the other lies the media is spreading about AR-style rifles.

If you want to hear the real story behind the AR’s history and what it’s intended for, check out the article from AmmoLand below:

USA –-(Ammoland.com)- According to the news media, an AR 15 Rifle is any gun that someone uses in the act of doing something bad.

What is an AR-15 really? Technically speaking, AR-15 is a brand name, like Kleenex or Xerox. And, just as with Kleenex and Xerox, the brand name has been hijacked by the general public to describe a whole class of things.

Who in corporate America asks their intern to “make a photocopy of that document using the Canon copier?” Or at home, few parents tell their kids to “grab aCottonelle nose cloth before you sneeze!” Exactly. When a brand name is successful, we regular folks tend to commoditize it.

“Hey, will you Xerox the annual report for me?” or “Connor, I’m not telling you again! Don’t blow your nose on your sleeve! Grab a Kleenex!”

The AR in AR 15 Stands for ArmaLite

Before we dive into the history of the modern AR 15 Rifle, we need to look the “AR” part. AR does not stand for Assault Rifle. Or Automatic Rearming. Or even Apoplectic Ruin. It is a product naming convention from the company that invented it, ArmaLite. In fact, there were a number of rifles with “AR” names, like the AR-1, AR-5, AR-7, AR-10, AR-16 and AR-17.

Let’s do a quick review of AR15 Rifle history what got us from conception to where we are today.

ArmaLite was founded as a division of Fairchild Engine and Aircraft Corporation. While most people equate the AR 15 Rifle with military variants, the company was actually founded with the goal of developing civilian market guns using modern materials and manufacturing technologies.

The initial business plan called for establishing some success with commercial products, then using that momentum to get into the government and military business.

Eugene Stoner, a former marine and independent weapons designer, becomes Chief Engineer of ArmaLite. Stone meets George Sullivan, Chief Patent Counsel for Lockheed Aircraft Corporation. Sullivan has a super-sized bee in his bonnet about the possibilities of using advanced (at that time) materials like plastics and aluminum alloys in radical new weapons designs. Hold that thought…

Plans don’t last long once the action starts… Upon request from the United States Air Force, ArmaLite develops the AR-5 survival rifle. The AR-5 was a modular rifle chambered in .22 Hornet with a four round magazine and bolt action. The receiver and barrel disassemble and can be stored inside of the over-sized stock. This design not only makes the AR-5 waterproof, but also allows it to float. That’s handy for over water ejection scenarios, as downed Air Force pilots were not keen about scuba diving to retrieve their gear. The modern day version of this rifle is the Henry U.S. Survival Rifle made by Henry Rifles.

The U.S. Army began a search for a rifle to replace the M1 Garand. While the Garand served admirable in World War II, all that combat use uncovered some areas for improvement. For example, soldiers wanted more magazine capacity than the eight rounds offered by the M1 Garand. Also, weight was an issue, with the M1 tipping the scale at ten and a half pounds. With World War II soldiers carrying their gear for (literally) years at a time, every pound counted.

Front runners in the contest were an updated design based on the M1, the Springfield Armory T-44 and the T-48, which was based on the FAL design.

ArmaLite submits plans for the AR-10 rifle with similar caliber and performance characteristics as the T-44 and T-48. Unlike the others, the AR-10 incorporated radical design changes that allowed use of lightweight aluminum receivers and plastic stocks and hand guards. The key to the design was using a steel barrel extension to lock up the bolt rather than the receiver itself. This allowed use of lighter and less strong materials for receiver construction. The AR-10 weighed less than seven pounds – in theory allowing a solider to carry three extra pounds of ammunition and/or gear.

ArmaLite entered the contest too late in the game to work out new design kinks and ultimately the T-44 was adopted as the M-14 Rifle in 1959.

Seeing possibility in the AR-10 design, the Army asks ArmaLite to work on a smaller caliber version to be named the AR 15 Rifle. The project is exploratory, as the military doctrine of the time called for large caliber rifles to be used in engagements at longer distances.

ArmaLite sells the AR-10 internationally through a licensing agreement with Artillerie Inrichtingen, the Dutch Arsenal. Not even the Dutch adopt the AR-10 and international sales are light. At this time, ArmaLite is only really selling the AR-5 aquatic survival rifle, so revenue pressures mount.

ArmaLite licenses both the AR-10 and AR 15 designs to Colt Firearms. Robert Fremont, a key player in the design team of the AR-10 and AR 15 Rifle models, leaves ArmaLite for Colt Firearms to help with continued AR rifle development. ArmaLite launches the AR-7 Survival Rifle. The AR-7 was a .22 long rifle caliber rifle targeted at the civilian market, although a number of military organizations around the world bought it.

Colt Firearms sells the first AR 15 rifles to the Federation of Malaya, later to become known as Malaysia.

Eugene Stoner leaves ArmaLite to serve as a consultant to Colt Firearms. At this point, ArmaLite was out of the AR-15 business – for the time being. The United States Air Force tests the AR 15 Rifle and purchases 8,500 rifles.

By this time, the M-16 had become the military’s primary service rifle, with over 300,000 purchased from Colt, now known as Colt’s Inc., Firearms Division.

ArmaLite operations in the US are ended by Elisco Too Manufacturing Company.

Colt loses the government contract to supply M-16 rifles to the military.

Mark Westrom purchases Eagle Arms. Colt wins a contract to supply 19,000 M-4 Carbine variants of the M-16 to the US Army and Special Forces Command.

Westrom and Eagle Arms purchase rights to the ArmaLite brand. Within a year, ArmaLite is producing the AR-10B rifle, chambered in .308. During this period, Knight’s Manufacturing produced an AR-10 derivative rifle, the SR-25. Colt wins another contract for 16,000 M-4 Carbines.

Colt’s wins back the procurement contract for military M-16 rifles with an initial order for 32,000 M-16 rifles. An additional order follows to upgrade 88,000 M-16 A1 rifles to the A2 configuration.

At last count, 16,973,489,012 companies are making AR-style rifles. Actually, I lost count at just over 12 million, so this number is really more of an estimate. Whatever the actual figure is, it’s a lot.

Kidding aside, the AR 15 Rifle has become the most popular general purpose rifle platform since, well, since ever.

Hopefully that sets the record straight. Share this article with your friends and relatives if they’re falling for the AR-15 fear mongering and give us your reaction in the comments.