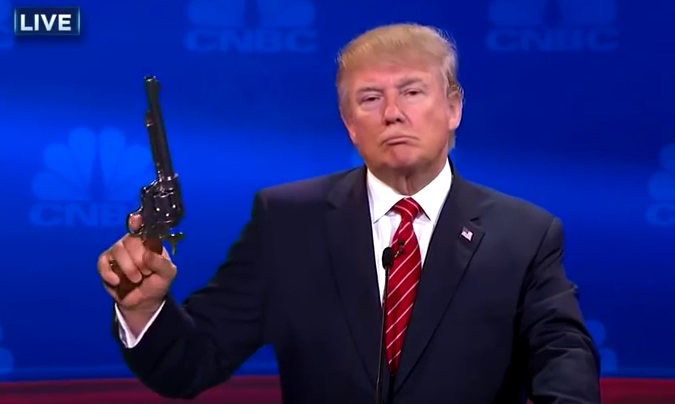 The immediate threat of national gun control has been greatly lessened with Trump’s upset victory. The NRA got on the Trump train early by taking the unusual step of endorsing Trump during the primary. If President Donald J. Trump repays the favor to the 2nd Amendment community, here’s what we can expect (from Bearing Arms): [quote_center]

President Trump will have the authority to executive authority to pass an executive order allowing the United States military to carry firearms on duty. Our domestic military bases and facilities have been the site of numerous terror attacks and mass shootings. Trump can reverse that with the stroke of a pen. He would also apparently have the authority to end firearm bans on other federal property, but there are so many laws and regulations that I don’t want to make that claim prematurely.

There is significant momentum towards establishing national concealed carry reciprocity in all 50 states. President Trump, working with a Republican-controlled House and Senate, should be able to get this passed into law within the first 90 days. There are four different bills to choose from in the House and Senate.

Making a hearing safety device criminal was one of the dumbest things ever done under the Administration of Franklin D. Roosevelt… and that’s saying a lot. The Hearing Protection Act is already written and has co-sponsors. It should be passed within the first 60 days of President Trump’s administration, which is a blessing to high-volume shooters such as myself who would like to better protect our hearing.

Gun control supporters want a “universal” background checks on all gun purchases in order to create a de facto gun registry… and that’s just not going to happen. What is going to happen is that President Trump, the House, and Senate are going to work on legislation to close the gaping holes in the existing background check system so that it is more effective, ensuring better and more accurate updating of prohibited persons. This will likely run in conjunction with mental health reform to both help people in crisis obtain the help they need, and ensure that fears of losing their Second Amendment rights won’t keep people from seeking help for a temporary but important mental health crisis.

President Obama has stymied the importation of historically significant firearms provided to allies after the Second World War and the Korean War through executive orders. The Collectible Firearms Protection Act will allow the reimportation of hundreds of thousand of M1 Garands, M1 Carbines, and M1911 pistols.

Of course, the selection of a pro-second amendment Supreme Court justice will be the most important thing Trump needs to do.

Recall, that leftist David Souter was put on the SCOTUS by Ronald Reagan. Gun owners need to be vigilant in vetting any Trump selections. Democrats in the Senate will be threatening to filibuster, so the battle has just begun for the Supreme Court. However, the future of the Second Amendment looks much brighter today than it did on Monday.