Home News Rand Paul did it! Now we can all enjoy NSA-free telephone calls... 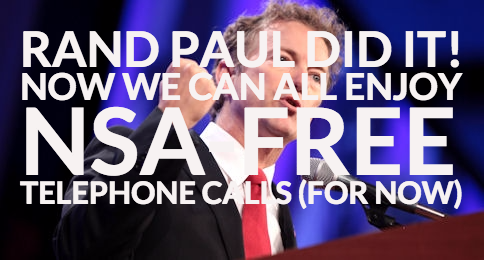 I don’t know how you spent your weekend, but I grabbed a cold brew and plopped my butt down on the couch this past Sunday, May 31, 2015 and spent 5 minutes flicking through 1,000+ channels trying to find C-SPAN …

Which means Sunday was the final showdown ….

The Senate had to drag itself into work on Sunday afternoon at 4pm to try and get 3 key provisions in the PATRIOT act re-authorized before midnight — or else they expired.

Here’s what happened and why it matters to you (hint: right now, you can place a phone call and the NSA will NOT be recording it! It’s pretty exciting, it’s like living in America!)

A Fight in the Senate …

I tuned in about thirty minutes late but there was already a fight in the Senate.

It appeared to me (a layman) that R. McCain and Dan Coats were trying to take up Republican debate time clock so that Rand Paul couldn’t speak.

Coats said he had not yielded the floor to Rand Paul–keeping him from speaking–then yielding to McCain for a question, instead.

All this because Rand Paul kept asking to talk …

It was pretty intense actually. The rest of the warhawk republicans tried to fear monger the re-authorizations in too …

Senate Majority Leader Sen. Mitch McConnell said, “We shouldn’t be disarming unilaterally as our enemies grow more sophisticated and aggressive, and we certainly should not be doing so based on a campaign of demagoguery and disinformation launched in the wake of the unlawful actions of Edward Snowden.”

Of course, the Democrats love Big Government too.

And  Sen. Dianne Feinstein — yes the same Feinstein who hates your right to  own guns, and was so upset that the NSA was spying on her own committee — of course supports wholesale spying on American citizens.

Because of all the time tricks — Rand Paul got to speak for only 5 minutes — by using the remaining democrat time.

He used the time wisely though — speaking very, very passionately. The 5-minute speech is worth listening to in its entirety but here’s a snippet …

This is what we fought a revolution over.

… This whole collection of all of our records all the time. It’s too much. The court has said, how can the records be relevant to an investigation that hasn’t started? The court has said that even under these lower standards of saying that it would be relevant, that all the stuff they are collecting is precisely irrelevant.

People say well they are not looking at it or listening to it. It’s the tip of the iceberg what we are talking about here. Realize they were dishonest about the program until we caught them. They kept saying over and over again we are not doing this collecting your records, and they were.

The head of the intelligence agency lied to the American people and he still works here!”

Ultimately it was succesful.

What Parts of the PATRIOT Act Expired?

Because Rand Paul helped block the re-authorization, three key provisions of the (so called) PATRIOT act expired. What were they?

Metadata Gathering. Under section 215 of the Patriot Act, the government had collected metadata on American citizens – i.e. the coming and going phone numbers and times and dates and lengths of phone calls – en masse without particularized warrants from the Foreign Intelligence Surveillance Act (FISA) courts. This provision, according to review boards appointed by the government, has not stopped a terrorist attack.

Roving Wiretaps. This provision of the Patriot Act allowed federal law enforcement to get a blanket warrant for all phones under the control of a particular suspect. Now, thanks to the expiration, the government will have to ask a judge for warrants on each individual device for a suspect. The government has used the provision less than one hundred times per year.

Lone Wolf Terrorists. This provision of the Patriot Act allowed intelligence agencies to monitor a “lone wolf” terror suspect who is not technically associated with a terrorist entity. Under the provisions of law prior to the Patriot Act, the government had to offer “specific and articulable” facts to a FISA court of a connection to a foreign terror group.

Well, this will probably go down one of three ways …

1. The USA Freedom Act bill will get passed. This is not much better than the PATRIOT act (all you need to know is the NSA and President Obama support it), but at least it’s a step in the right direction …

2. The PATRIOT act dies. Totally. This would be ideal.

3. The PATRIOT act is restored in entirety. This probably won’t happen because Rand Paul made such a stand and the second highest court in the land has already ruled it’s privacy invasions are illegal.

What Can You do?

Well, first off, enjoy your phone calls for the time being — your metadata is not being recorded … it’s like living in a free country!

Second, take your privacy into your own hands as much as possible.

Do you really trust the same Government that was illegally spying on every American citizen — and would still be doing it if they weren’t caught by Snowden — to do what they say they’re going to do?

For now, we can celebrate this small victory and hope that it gets more people thinking about the idea of Liberty that made America great.