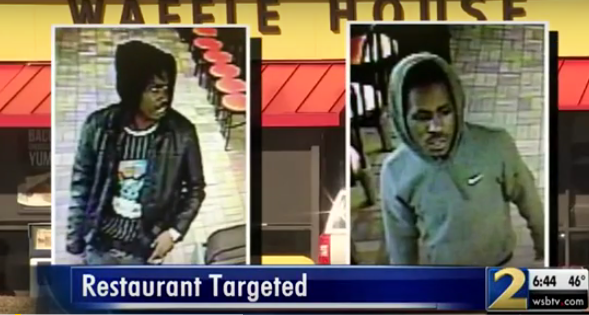 A pair of armed lowlifes were in the process of robbing a Waffle House restaurant when a waitress ran out to her car and put a stop to the madness. She retrieved a gun and fired a warning shot in the air. With hot lead raining down from the sky, the thugs decided that the robbery was over and fled with a measly $200. The waitress has been fired and some speculate that this termination was due to Waffles House’s ban on employees possessing guns.

To the media’s horror the armed citizen strikes again:

O.K. granted, as a general rule of thumb, warning shots in the air are usually an ill-advised self defense strategy.

That being said, it’s not like the bullet falling from the sky poses some sort of extreme danger to the public like the reporter claims it does. As this MythBusters finding demonstrates, a shot fired straight up in the air probably can’t fall with enough velocity to be fatal, but when fired at an angle the falling bullet could potentially reach lethal velocity. It’s pretty unlikely that the bullet would have the bad luck of: (A.) landing on someones head, and (B.) have enough velocity to kill them, but it’s at least remotely possible.

Anyway, the risk of injury from falling bullets isn’t the main reason that warning shots are generally a bad idea. A shot meant to get attention and show the criminals that you mean business, could be misinterpreted as an attack on them, resulting in retaliatory gunfire. In most circumstances it’s a bad idea, but that doesn’t mean it’s always the wrong decision.

The bottom line, this waitress was in fear for her life and did what she saw as necessary to protect herself. The shot in the air added little danger to the public and the thugs ran like hell for their lives. Score one for the armed citizen!