Home Guns How To Recognize An Empty Gun (Could Save Your Life!) 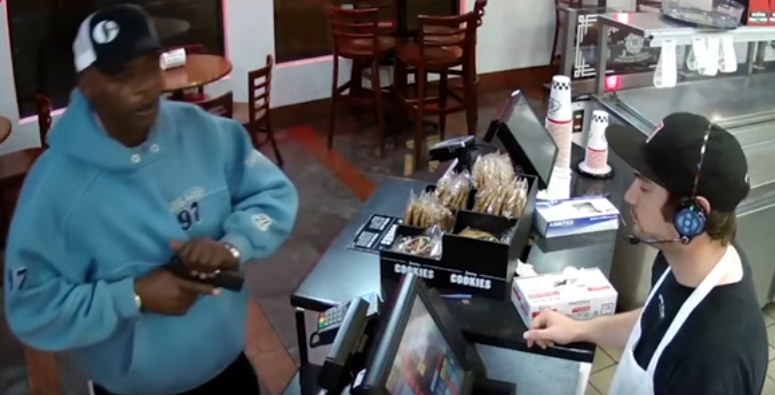 Recently, a video has been making its way across the internet of an armed robbery at a Jimmy John’s restaurant.

It’s become viral because the employee being robbed doesn’t seem very intimidated and/or he seems bored.

More importantly, I think it’s a learning opportunity for everyone because the armed robber appears to be using a malfunctioning gun!

Even if he wanted to shoot his victim, it doesn’t look like he could do it. Check it out:

Here’s the (what appears to be a security cam) video of the entire robbery caught on tape.

Note at 0:34 in the video the bad guy goes to rack the slide on his handgun…

He makes the common beginner mistake of riding the slide forward instead of letting it go, which actually causes the gun to malfunction (Luckily, the bad guy looks pretty nervous and doesn’t notice his gun is useless at this point).

How To Identify An Empty Or Malfunctioning Gun

At about 0:46 in the video, you can see the bad guy threatens someone behind the employee at the counter (off screen) by shoving the gun in the direct eye-line of the employee:

The yellow arrow is the employee who has a clear view of the bad guy’s gun.

If you look at the bad guy’s gun there are at least three things that you can see that tell you the gun is out of battery/malfunctioning:

These are all three things you can look for to identify a malfunctioning/empty/out of battery gun. Take a look at this picture here: 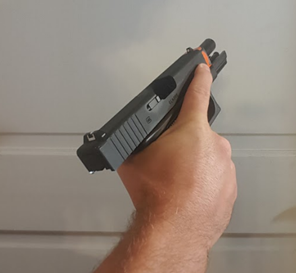 If you’re a regular gun shooter, then this is not news to you. For other people, this could save your life.

How This Can Save Your Life

The robbery you just watched ended fine, the victim complied and the bad guy didn’t kill anyone. Everyone was lucky.

If the bad guy is already killing people or isn’t so nice, the best opportunity you might have to attack him to defend yourself is when his gun is malfunctioning.

Greg Ellifritz over at Active Response Training once wrote an article about weapon malfunctions in an active shooter event. Surprisingly, they are quite common!

“Take a look at some of the active shooter events in recent history. The shooter had a malfunctioning or empty gun in every one…

1988- Atlantic Shores Christian School. Shooter subdued by a teacher after his gun jammed.

2010- University of Alabama Faculty meeting. Shooter’s gun jammed and she was locked in a closet by coworkers until police arrived.

2011- Tucson Shooting. Shooter had to reload and had a jammed gun

2012- Chardon High School. Shooter fired 10 rounds with .22 pistol and then ran out of ammunition

During a weapons malfunction or when the gun goes empty and the killer attempts to reload are both times when they can’t shoot anyone, and give you a moment of opportunity.

Long Arms (Rifles/Shotguns) Can Malfunction, Jam, or Go Empty Too

Unfortunately, it’s not as easy to identify a rifle malfunction as it is a handgun malfunction.

I think the best strategy here, if facing a bad guy armed with a rifle is to wait for a stop in the shooting…

If you can then get visual confirmation that he’s messing with the gun trying to get it to fire again — that would indicate he’s experiencing a malfunction and would be an opportunity to attack/flee.

Likewise, a pause in the shooting could indicate that the bad guy is out of ammo and needs to reload, also giving you an opportunity to make your move.

In the video on this page, you can see a student that fights back against an active shooter with a shotgun. He fights back at the perfect time, coming up behind the shooter when he is in the process of reloading his shotgun.

This is an important safety tip even for people you know who aren’t into guns or don’t want to train with them.

Be sure to share it with everyone you care about.