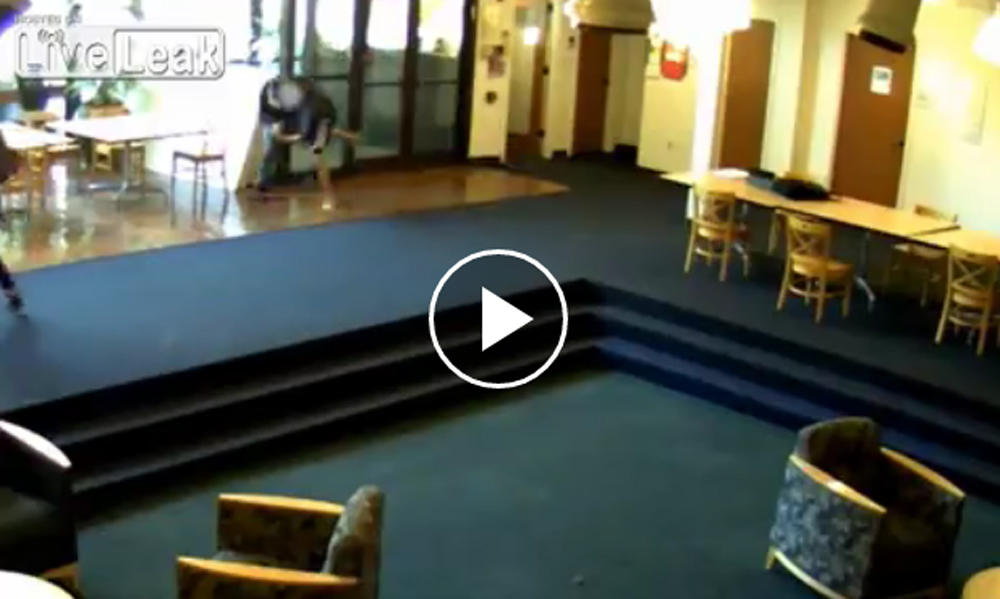 In the video below, you’re going to see surveillance footage from the 2014 Seattle Pacific University Shooting that could have been a tragedy.

But he did take fast action! Now, watch as he takes down the active killer who shot and killed one student and injured others (and also keep reading to see some key points you should think about if you’re ever in a similar situation):

What Are Your Takeaways? Here Are Mine …

* Bad Guy appears to be using a break action shotgun

* At 0:50 the poor girl coming down the stairs doesn’t even NOTICE the bad guy holding a shotgun until he shoots her. Then she seems very confused by the fact she got shot and stumbles off. (Keep your eyes open and head on a swivel people!) – Also notice — this is not Hollywood, even though she got shot with a shotgun, she didn’t fly through the air!

* I don’t know if the hero student planned it, but it was perfect time when he came out of the door behind the killer with pepper spray, which he immediately shot into the face of the bad guy

* The GOOD guy did the right thing after spraying the face of the bad guy. He did not wait to see if it took effect – he immediately tackled the bad guy. The bad guy is using a long gun, good guy closing the distance takes away much of utility of such a weapon.

* Good guy tackles bad guy. Starts to choke him and then takes the long gun from him when the bad guy lets it go. Importance of h2h combatives/martial arts here! Learn and get comfortable with wrestling/taking people down and choking them.

* It looks like good guy took the long gun back to another room and came back to find a knife in the bad guys hand, disarms that too and chokes him some more until more help arrives.

We salute you Jon Meis!

Could You Save MORE Lives In This Scenario?

Also from a news report on the incident (emphasis mine):

“Jon Meis, a student working as a building monitor, pepper-sprayed the shooter as he stopped to reload, then put him in a chokehold and took him to the ground, according to police and a friend who spoke with Meis after the shooting. Then other students and faculty members rushed to hold the shooter down until police arrived.

But until it was clear that only one shooter was responsible, students barricaded themselves, pulled blinds and waited for word that they were safe. Medics were forced to wait outside until police were sure there was no more danger.“

Smart work on the students holding up to see if there was more danger … but look at what happened?

I don’t know if this is standard procedure, but the Medics were “forced to wait outside until police was sure there was no more danger”.

Say you’re the hero here …. BUT … 20 seconds before the bad guy shot your friend, or your wife, your daughter, etc …

Are you going to watch your loved one bleed out while you wait for medics to arrive …. or are you going to get some Tactical Medicine training and CARRY that medical gear with you so you can continue being a hero and save the day?

Learn how to save lives too!