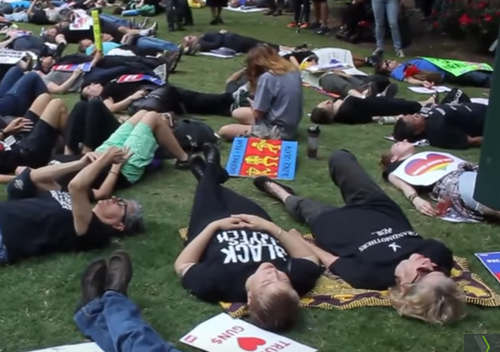 Leftists on the progressive protest circuit have taken an irrational protest to a new level. They staged a die-in to protest Donald Trump’s speech to the NRA. Their fake deaths were a perfect symbol of the fake struggle between courageous politicians and a supposedly evil gun lobby.

Organizations like  Handgun Control inc. used to be interested in public safety, not just politics. Their logic was simple, by making virtually all modern firearms illegal, heat of the moment homicides and suicides would be less common. These anti-gun citizens, were willing to deny normal law abiding citizens the right of gun ownership for an anticipated reduction in crimes of passion and suicide. Their platform was gun registration followed presumably by confiscation.

The Hand Gun Control Inc. platform was extremely unpopular with the American public and politically untenable. Eventually, Hand Gun Control Inc. changed it’s name to The Brady Campaign to Prevent Gun Violence, they began pushing politically expedient lies. Instead of trying to “solve gun violence” with gun control they now stand on the graves of dead children after mass shootings, pretending that some ludicrous new do-nothing law would have prevented the tragedy. Utterly nonsensical laws have replaced the old registration/confiscation platform of the past.

At this point in time, the left doesn’t have any honest organizations actually interested in public safety remaining.

With that in mind, enjoy watching these hysterical nutcases faking their own deaths for a fake cause.