Home News This Guy Chose The Wrong Convenience Store To Rob, Gets Shot By... 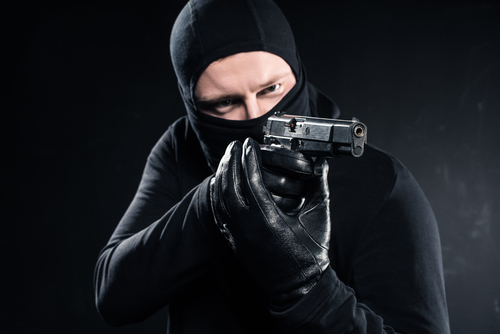 Even with the mass media’s attempts to virtually black out all mentions in the news of positive uses for guns, occasionally, you will still hear about someone using a gun to stop a crime.

Sometimes what makes it newsworthy, in spite of the story’s support of gun ownership, is the people involved or something unusual about the whole situation. Still, chances are that you haven’t heard of this strange incidence of defensive gun usage that took place in Brazil in 2017. Sandrarose.com gives us the details:

Surveillance footage from inside the store shows the criminal was shot multiple times during the robbery on May 31st.

The footage shows the suspect, wearing a white shirt and a motorcycle helmet, enter the store and produce a handgun.

One of the cops took cover behind a display shelf and drew his service revolver. A 2nd camera angle shows the same officer fire 2-3 shots at the robber who dropped his gun on the floor. As the wounded suspect went for his gun he was shot by the other officers.

The suspect collapsed on the floor where he lay motionless.

We don’t know from this news story if the would-be robber survived the shooting.

Regardless, we all know that this guy had an incredibly bad bit of bad luck that day. After all, how often does it happen that, when you go into a store, every single other person in the store is an armed police officer? Not terribly likely. No, not likely at all.

One thing is clear, though, if he survived, it’s likely that this attempted robber will think twice before robbing a convenience store (or, at least, that one).