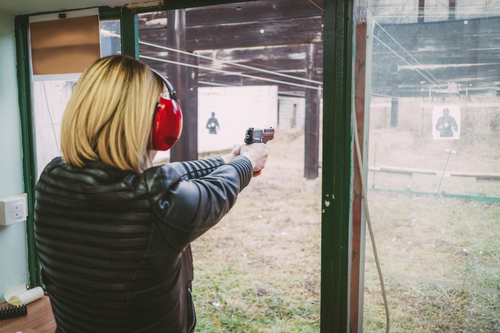 It comes down to: If you don’t know that you need it, you won’t think to look for it.”

Fortunately, along that line, there are groups sprouting up to empower women with firearms training. One such group is “A Girl & A Gun Women’s Shooting League” which is a national organization.

Some local chapters of A Girl & A Gun take things a bit further than education and competition (which are both good), though. For example, a chapter in Melbourne, Florida makes it a social encounter, too. Cynthia Van Gaasbeck writes,

“It’s the same safety stuff every time. There are new people each time, plus we don’t want to get complacent,” [ LuAnn] Moyer [facilitator of the space coast florida chapter of A Girl & A Gun] said, adding, “We spend about 15 minutes on the safety briefing and introductions and then about 5:30 p.m. we head over to the range and we start the shooting time.”

Moyer, 55, of Melbourne, said they pack up the gear and head back in about an hour later so the second group gets its range time. Some go home and some settle in for dinner and drinks at the facility’s full-service restaurant, Double Tapp Grill. Yes, guests can order alcohol but no, not before shooting.

For those interested in getting more women involved in firearm ownership and shooting competitively, this chapter of A Girl & A Gun shows that, for many women, it’s more than just safety that would draw them into this world. Van Gaasbeck writes,

“We stay usually until they close. Sometimes we’ll stand talking in the parking lot,” Moyer said. “Because it’s more than shooting. It’s a bonding sisterhood, you know, we are there with you through the good times and the bad times. We’re connected and enjoy each other’s company.”

That bonding element was commonly cited by the women when talking about why they are members.

“I joined because I wanted some camaraderie with women and to learn how to shoot,” said Grace Ban of Indian Harbour Beach. “I went to a gun show and met LuAnn and the next week I was in and it’s been love ever since.”

“I wanted to learn how to shoot and to feel more comfortable with it and the ladies just seemed really nice,” Hiltz said.

The banter continues around the table and Linda Shideler, 70, of  Rockledge, offers: “Basically, it’s a group of girls that go and shoot. You don’t have some guy telling you you don’t know what you’re doing.”

So, if you’re interested in helping the women in your life become more comfortable carrying and using firearms, keep this social element in mind along with the emphasis on safety and education. Because the more women who we can get involved in shooting, the more women that can be kept safe from harm.