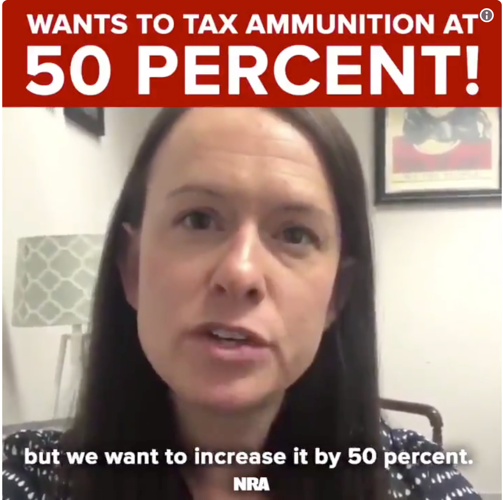 Research by the RAND Corporation shows there is “little empirical evidence to indicate how taxation would influence firearm-related outcomes, such as violent crime or suicides.”

But who cares about empirical evidence when you’re a liberal?

Connecticut state Rep. Jillian Gilchrest certainly doesn’t. All she cares about is pushing her agenda, which currently includes imposing a new 50% tax on all ammo sales.

Since Connecticut currently taxes ammo at the normal rate of 6.35 percent, the new proposed rate would represent an increase of 687 percent!!

According the Hartford Courant, Gilchrest said:

“We see this as a public health measure similar to what we’ve done in the state of Connecticut with increasing the tax on cigarettes. When we increase that tax we’ve seen a reduction in use. And so we want to continue Connecticut’s legacy of being a leader on preventing and addressing gun violence and we see this as another step forward in that direction.”

Higher taxes reduce the usage of products like cigarettes, alcohol, and sugary beverages because those are all unhealthy products that people consume on a regular basis. If the higher taxes hurt their budget, they consume less.

But somebody intent on violence will not be deterred by an ammo tax. Violence with intent to harm or kill is typically a one-time event, not a daily habit like smoking or drinking. So, as the RAND Corporation concluded, higher taxes won’t reduce violent crime.

At best, Gilchrest’s proposed tax would reduce the shooting activities of lawful gun owners. But what’s the good of that?

Here’s Gilchrest herself talking about her proposed tax:

#Connecticut state Rep. Jillian Gilchrest @Jilchrest introduced HB 5700, which would impose a 50% tax increase on ammunition. This dreadful legislation punishes law-abiding citizens and makes it harder to learn how to safely use firearms. pic.twitter.com/fuK07CrhDJ

So, what do you think about this proposed 50% ammo tax? Let us know your thoughts below.