Home Guns What Does The 2nd Amendment Mean When It Talks About Bearing ‘Arms?’ 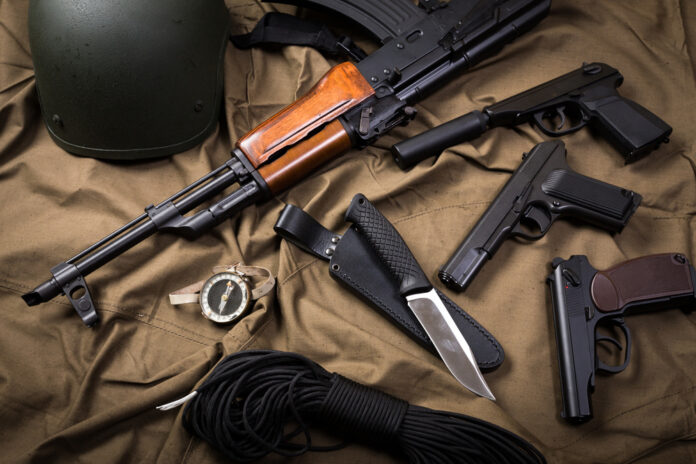 You’ve heard the argument for years. I first remember Bill Clinton making this argument, though, I have no doubt that the argument is from before his time in politics. What am I talking about? It’s the argument that the Second Amendment is about allowing hunters to be able to hunt.

Today the word “arms” refers collectively to offensive or defensive weapons. The word’s meaning has changed little since it was first used seven hundred years ago. It’s definition has never restricted civilian use of military weapons, including when the Second Amendment was approved.

“Arms” comes from Middle English and originated from the Old French word “armes,” which meant “weapons of a warrior.” This word dates back to 1300. “Arms” also originates from the Latin word for “weapons,”arma.” This word was also first used in the 14th Century.

(On a side-note, the word “firearms” popped up around 1640 to describe weapons that used gunpowder compared to other arms like bows and arrows)

From this we can conclude that the word “arms” referred to weapons found among contemporary military arsenals.

In 1755 Dr. Johnson’s Dictionary of the English Language was first published. It defined “arms” as “weapons of offence, or armour of defence.”

Again, the meaning does not exude military weapons.

Since the word “arms” means the same thing today as it did centuries ago it’s only logical the authors of the Second Amendment meant the same thing. And unlike the English Bill of Rights, there are no limitations placed on the right to keep and bear arms in the U.S. Constitution.

Not that it would matter, since it is a natural right not a privilege granted to us by the government. But it removes this one final argument a gun control advocate might make to justify restrictions.

Matinell’s analysis makes it abundantly clear that the right of people to keep and bear arms, which is protected by the U.S. Constitution, very clearly includes any weapon which could possibly be used for war. Yes, that means pistols and rifles. And, taken to its logical conclusion, yes, the Second Amendment allows you to park your very own M1 tank in your driveway. Assuming, of course, that you can afford one.

Most people can’t afford an M1 tank or an F15, but the point is that it’s perfectly clear that the Founding Fathers placed no restrictions on what weaponry people were allowed to keep. This means that, quite literally, any restriction on guns and ammunition is explicitly unconstitutional.

Don’t let anti-gunners and other leftists try to twist arguments by redefining words. The words mean what they mean, and our right to keep and bear arms is absolute. Always remember that.