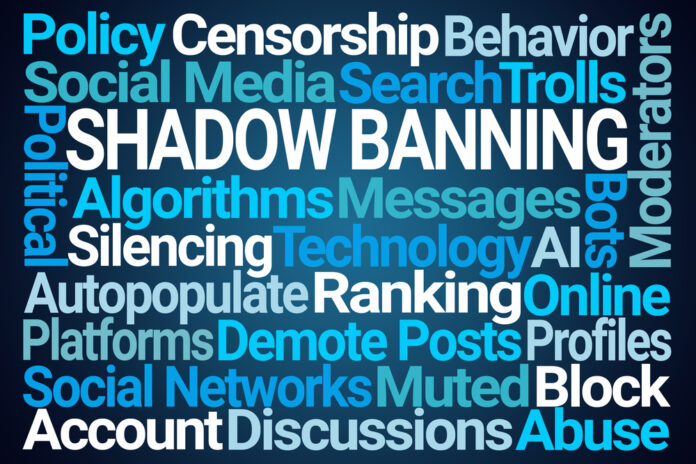 If you’ve been hanging around the internet, especially social media, for any amount of time, you may have heard of the term “shadow banning.” In a nutshell, shadow banning is the effort to censor or suppress information in a way so that it’s not obvious to the average observer that censorship is happening.

Since shadow banning is primarily happening on social media and internet search engines (or, at least, that’s where the term is usually applied), here’s an example for you: Say you post a pro-Second Amendment post on Facebook. Facebook, like most social media companies, doesn’t like the Second Amendment, so, they set their site so that your pro-Second Amendment post is shown to very few (if any) people. It can be found, but only if people go to your Facebook wall to find it.

In this way, Facebook can say that they aren’t censoring you (it is still on your Facebook wall, after all), but they keep anyone from coming across it unless they look deep into your Facebook wall, so, in effect, no one notices that the post “disappeared” from anyone’s view.

As frustrating as that is, what is really infuriating is that Joe Biden’s Bureau of Alcohol, Tobacco, Firearms, and Explosives is taking shadow banning into the real world, and using it as a way to make guns more difficult for law-abiding Americans to buy. Lee Williams writes,

Before the Biden-Harris administration took over the White House, the Bureau of Alcohol, Tobacco, Firearms and Explosives usually revoked an average of 40 Federal Firearm Licenses (FFLs) per year. But, in the 11 months since Joe Biden declared war on “rogue gun dealers,” the ATF has revoked 273 FFLs – an increase of more than 500%. However, rather than targeting the true rogues, Biden’s ATF is revoking FFLs for the most minor of paperwork errors, which were never a concern for the ATF until Biden weaponized the agency.

And when Williams mentions “the most minor of paperwork errors,” he’s not exaggerating or kidding. Williams continues,

For example, the transaction number for a NICS background check requires nine digits. If a gun dealer mistakenly omits a number, their license can be revoked for failing to run a background check. Under the Biden-Harris administration, there is no longer any room for human error.

Similarly, the ATF has started contracting out its trace requests, Clark said. He and Bocker have talked to a dealer whom the ATF accused of not complying with a trace request. They fault, they found, actually belonged to the ATF, which hadn’t updated its records from the contractors. Until this was clarified, the dealer was at risk of losing everything.

So, not only is Biden’s ATF being unreasonable, they are coming down hard, looking for excuses to strip honest FFLs of their livelihoods over simple, honest mistakes that harm absolutely no one.

And the ATF is doing this quietly so that everyday Americans, even pro-2A people like you and me, don’t even know that this is happening while our options for where we can make legal gun purchases dwindles. The ATF is, in effect, shadow banning both gun dealers and, they hope, firearms in America over the long run.

It’s time that we put our legislators’ feet over the proverbial fire and have them put a stop to the ATF and Biden’s DOJ’s war on the Second Amendment in America.