As you know, Washington State, part of what is often called “The Left Coast,” has been hostile to the Constitution and to gun rights for some time now. Unfortunately, for law abiding residents of that state, this foolish line of thinking is still going strong there and, in fact, may be showing signs of getting worse.

A perfect example is that the mayor of Seattle, Jenny Durkan, has decided that she wants guns under the control of the city, even though doing so is illegal in that state. Dave Workman writes,

Seattle Mayor Jenny Durkan has signed a city ordinance requiring so-called “safe storage” of firearms, with civil penalties for violations, despite a 35-year-old Washington statute that placed sole authority for gun regulation in the hands of the State Legislature.

Now, in case you’re wondering, the state law is very explicit in that it says that “[c]ities, towns, and counties or other municipalities may enact only those laws and ordinances relating to firearms that are specifically authorized by state law[…].” In other words, the law specifically states that Seattle cannot due what Mayor Durkan has taken upon herself to do.

But, never fear, there is already a fight coming down the pike over this issue. Again, from Workman:

Alan Gottlieb, founder and executive vice president of the Second Amendment Foundation, based coincidentally in the neighboring city of Bellevue, confirmed that there will be a lawsuit challenging the validity of the ordinance under the state statute. SAF was joined a few years ago by the National Rifle Association, Citizens Committee for the Right to Keep and Bear Arms and other gun rights groups in a lawsuit that stopped Seattle from banning firearms in city park facilities.

Now, as in every lawsuit, there is the possibility that gun rights advocates could lose this case, which, of course, is what nutcase gun grabbers want.

That being said, though, there is hope that the court system will give the smackdown to Mayor Durkan’s ridiculous attempts at taking away Second Amendment rights in Seattle. For example, there was the recent Ninth Circuit Court of Appeals ruling in favor of open carry (that’s a surprise right there).

With that in mind, here’s hoping that gun grabbers on The Left Coast finally get put in their place so that they actually go find something productive to do. 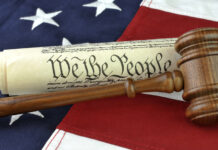