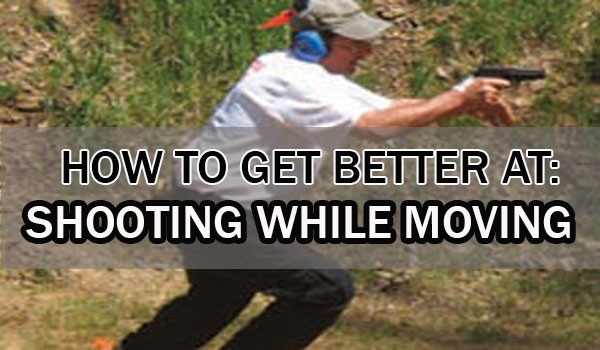 Shooting and Moving, an Important Combination

The type of shooting that most of us do at our local shooting range isn’t really all that useful.

Oh, it’s fine for teaching the fundamentals of shooting and in fact every shooter needs to be proficient at shooting at a stationary target, before moving on to other, more complex types of shooting, but if that’s all the shooting you ever do, you’re going to be in a world of hurt if you ever have to defend yourself.

To start with, the bad guys aren’t going to stand still at just the right distance, waiting for you to shoot them. They’re going to be moving and they might be shooting at you. They’ll be moving to try and prevent you from shooting them.

They might move towards you, they might move sideways or they might run away; but you can be sure that they won’t be holding still — looking like the classic silhouette target — especially when they see a gun in your hand.

Shooting a moving target is much harder than shooting a stationary one.

You have to lead the target, actually shooting at where they are going to be, rather than where they are. Actually, within the confines of your home they won’t move all that far in the time it takes for the bullet to travel from your gun to their body, but the principle still holds. You have to be moving that gun, panning it as you take aim.

Even stopping the movement of your gun for a moment will guarantee a miss. About the only way you can hold a gun steady and hit a moving target is to target on somewhere that they are moving towards, and then pulling the trigger just before they get there.

If they are moving so that you can’t hit them, then it would be a good idea for you to be moving, so that you can make it harder for them to hit you. The last thing you want to do is to be standing still, making a good target out of yourself. If you do, it’ll probably be the last thing that you do.

The trick is to move as smoothly as possible.

When moving forwards or backwards, take a smooth, even heel to toe step. That will provide your gun with a much more stable base under it, even if it is a moving one. By smoothing out your step as a heel to toe step, you’ll reduce the shaking and make it much easier to aim.

You actually already know how to do this … picture yourself picking up an almost full glass of water and moving as quickly as possible across the room … you’ll bend your knees, and walk in a crouching manner, using your legs like suspension technology to eliminate the bumps, and going heel to to smoothly, trying not to spill the water as you move as quickly as possible. Same thing! Don’t over complicate it trying to be “super tactical”.

For moving sideways, use a sliding step where you move the foot in the direction you want to move to the side and then slide the other foot to meet it instead of crossing your feet. By keeping both feet in light contact with the floor, you can eliminate the bouncing, giving your gun that stable platform it needs.

Don’t expect this to be easy or to get it the first time you try it.

This is one of the hardest ways of shooting there is. You’ll need a lot of practice, before you can become proficient in shooting while moving.

Practice in your dry fire time, concentrating on keeping the sights on target, even while you are moving.

When you practice drawing from your concealed carry holster, practice taking a “draw-with-a-sideways-step” before your first shot.

That will go a long way towards helping you to develop the ability to shoot while moving.