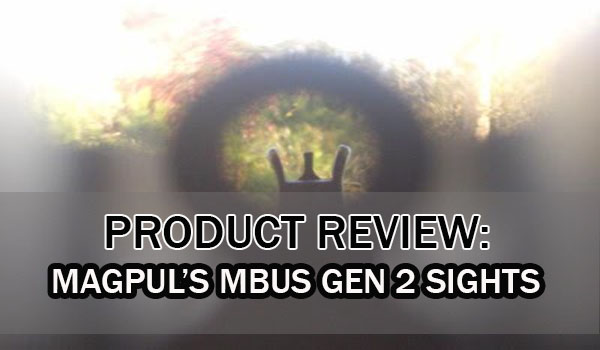 If you are just starting out in the AR-15 world, then you might not have much money. Or you don’t want to spend a lot because you don’t know what you will like yet. Or perhaps you want to do a budget build. Or maybe you just don’t like spend more money than you have to (who does right?)

If you have more than one AR-15 rifle, then you will need to put backup iron sights on all of them … and that can start to add up real fast.

And the Magpul Mbus Gen 2 sights are a pretty good price. You’re basically looking at getting both the front and rear sights for under $100. Compare that to the $200+ you might pay for some other brands (which we’ll talk about in a moment) and you’ll see they’re a good deal.

Ok, so the big pink elephant in the room with the Magpul sights is that they’re made of polymer.

Now, at first that might turn you off because your first thought is “that’s not going to be as strong as steel” but we’ll get to durability in a moment …

Let’s talk about the benefits of the polymer, spring-loaded design of these things:

They’re lightweight – from what I can gather, they weigh 1.3 oz each (front and rear). That’s practically nothing. They’re featherweight. Very important because ounces = pounds real fast on a rifle.

They’re slim profile – They take up less than 1″ of MIL-STD 1913 Picatinny receiver rail space. There is less to snag on brush or slings or anything else.

Look Good – I think they’re a nice design and look slim and low profile when folded down and out of the way. And if I have them flipped up, then I’m shooting with them so I don’t even look at them 🙂

Accurate as Backup Iron Sights can be

When I recently got certified as a Concealed Carry Academy firearms instructor, during the rifle portion of the bootcamp, I ran my AR-15 with these Magpul sights only because I didn’t have an optic yet.

We ended the rifle day of training with a 300 point qualification rifle course from various distances from 25 yards all the way up close to CQB drills at 5 yards with the AR-15, from multiple fighting positions like prone, kneeling, standing, and shoot & move — all with time limits.

Long story short, as you can see in the picture I scored a 269 out of 300 possible total score — enough to win the high score for the day — even though most of the other guys had red dots or other optics on their AR-15’s. 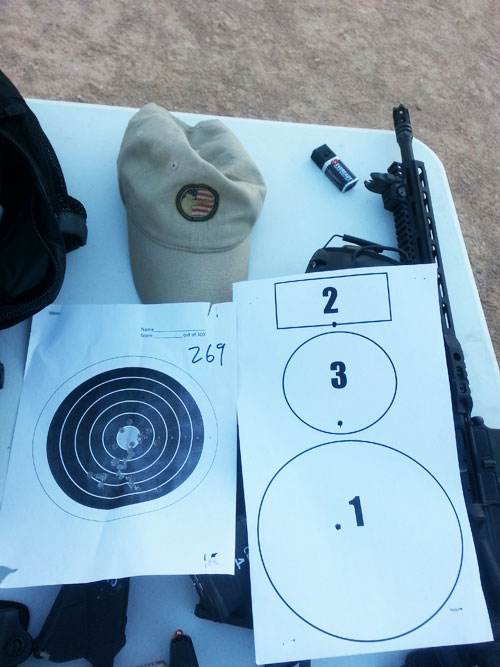 In other words, if you do your job behind the rifle, these sights — once you get them zero’ed — are plenty accurate.

As I mentioned these made it fine through the previously mentioned instructor level rifle training class, but that’s the total extent to which I’ve gotten to “beat” on these BUIS, so I couldn’t speak to their long-term durability  …

However, I recently came across a “drop test” performed by a guy named Andrew Tuohy from “Kitup” on military.com. Here’s what he found (in a nutshell):

“In order to test whether certain popular BUIS would still be serviceable after taking a hard hit, I attached three different types of BUIS – Troy Industries, Magpul Industries and Diamondhead USA – to an AR-15 rifle chambered in .300 AAC Blackout weighing 7 pounds and dropped the rifle upside down from a height of 5 feet onto a concrete surface.    Other portions of the rifle were protected from damage, and each set of BUIS took a solid hit from the drop. The ammunition used was Remington Premier Match .300 AAC Blackout 125 gr OTM. Each sighting device was installed according to the manufacturer’s instructions, then points of impact was established from a stable shooting position at 25 and 200 yards. After the drop, the rifle was fired again, and any change in point of impact noted.    The first BUIS dropped was the Diamondhead … Point of impact shifted approximately 16 MOA.     Next came the Troy sight. Cosmetic damage was apparent, but the sight could still be operated normally. Point of impact shift was approximately 3 MOA.    The last set of BUIS was the Magpul MBUS. Damage was purely cosmetic and the sight remained fully functional. Point of impact shift was less than 1 MOA. Unlike the other sighting devices, a second drop was performed. Results did not change, and the sight remained functional.”

What’s even more impressive, is that both the Troy and Diamonhead sights typically cost in that $200+ range that I was talking about earlier.

That’s double the price of the Magpul sights …

And to make it even MORE impressive, I found this on the author of that article’s private blog:

“One thing I did not mention in the post which was sent to KitUp (due to word count limitations) was that after dropping the MBUS twice, I picked the rifle up, held it over my head like the maul I used to split seasons’ worth of firewood while growing up in Alaska, and swung it down on a concrete shooting table, with the MBUS taking all of the impact. It did not break or shift POI by anything more than 1MOA.

My opinion of the MBUS went from “cool airsoft gear bro” to “wow.””

I don’t know about you, but that’s way more abuse than I plan to put my own BUIS through, but I’m definitely glad to know that they can take it!

I like them because they do the exact job that they are meant to do:

They appear to be reliable, well thought out Backup Iron Sights (BUIS) that fold down nice and slim when not in use, are aesthetically pleasing, and they can take enough abuse that even if some catastrophic event caused your primary optic to go down — they would most likely survive and be ready for you to aim with.

And the best part is that, surprisingly, they either hold their own with other more expensive sights or simply out perform them in the ruggedness & durability department!

I can’t think of anything more you might want out of BUIS.

You can go and pick these up, for less than $100 total from Brownells.com right now.

I’ll close with one final thought …

At the same instructor bootcamp one of the guys next to me said, “so you’re a big Mapul fan huh?” because I had the Magpul sights, and PMAG magazines, and a Magpul CTR stock and Magpul pistol grip on my AR-15 …

Until he said it, I didn’t realize how much Magpul gear I had on my rifle … but … I guess my answer best summed up why.

“I’m not a big fan boy or whatever, but it’s priced right and it just works man.”

And, when it comes to gear you can trust your life with, that’s what you need.