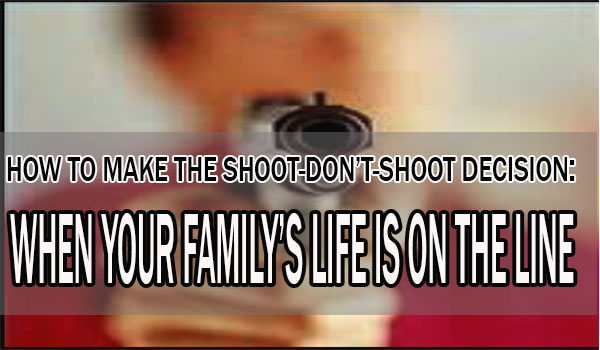 It’s happened… you’ve heard that infamous bump in the night and gotten up to investigate.

You’ve got your pistol and your tactical light, and you’re going through the house, room by room, just as you’ve practiced, clearing it.

Suddenly, you’re face to face with the bad guys… they’re right there, across your sights. Do you shoot or not?

This could happen to any of us at any time. If we’re not ready for it, we’ll either shoot the wrong person or wait too long and they’ll shoot us. We have to be ready… mentally ready, or we’re not going to make the right decisions in that critical moment.

Before that moment happens, you have to decide if you’ll shoot.

It may seem like an odd thing to say, but many people don’t take the time to prepare themselves mentally. So, when the moment comes, they’re asking themselves if they can do it or not. That’s the wrong time to be asking that question; you’d better ask it beforehand.

But there’s more to this issue than just deciding if you will shoot; you need to decide if you should shoot as well.

While it would seem that you should be able to shoot anyone who breaks into your home, especially at night, you need to be careful. While the law does allow you to use deadly force to defend yourself and your family (and your home in some states), the courts have to agree with you… after the fact.

That’s the rub. You see, you’ve got to make a decision in a split second and the legal system has days or even weeks to analyze the situation, your actions, the actions of the invader and decide whether or not you should have taken that fatal shot.

It’s not fair at all, because you could end up in jail, just for doing the right thing and defending your family.

The key here is whether the invader is an imminent threat to you or your family. That term, imminent threat, means that you are convinced that if you don’t take preemptive action, they will do bodily harm to you or one of your loved ones.

So, they will have to be capable of causing harm, either because of being armed or because of demonstrated unarmed combat ability, have indicated intent to harm either by actions or words and be facing you or their intended victim.

If they turn to leave, they are no longer a threat.

That can be a lot to analyze in a split second. If a bad guy is standing over your child’s bed with a knife in an upraised arm, it’s obvious. Likewise if they’re facing you, looking over the sights of their own gun.

But not every situation is that clear cut. There are many situations where their intent may not be obvious and if you don’t know their intent, there’s no imminent threat.

On the flip side of the coin, there’s always the possibility that they are going to get you with their first shot. “He who doesn’t shoot first might not get a shot.”

I guess when it all comes down to it, it’s better to be alive and in jail for defending your family, than to be dead. Even worse, to be alive but have a family member who is dead, because you waited too long.

Do everything you can to be sure, before pulling the trigger. But then when it’s time to pull it, don’t hesitate.