Home Guns Why you should ALWAYS carry your gun 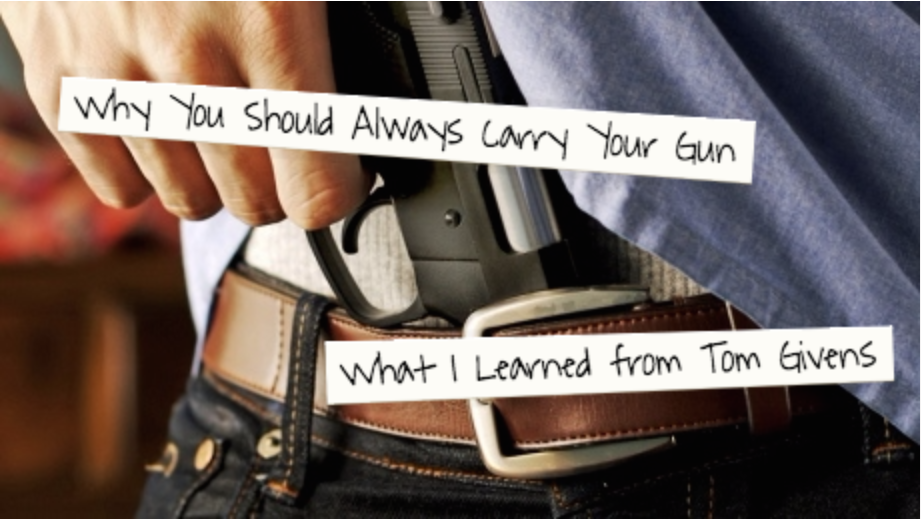 If you have a gun and you have a concealed carry permit, do you always carry your gun?

If no, then why not?

I spent this past weekend taking a 2-day combined pistol/shotgun class from a living legend in the firearms training industry — Tom Givens.

Today, I want to share with you some advice from the man himself.

If you go to the website of Tom Givens at Rangemaster.com, you might not get the full picture of why learning from Tom is so special …

There are a couple things that make Tom special in my mind, that to be honest, I didn’t fully appreciate until spending a weekend with him:

1. His age and experience — (he retired after 25-years in police work and has been working in firearms instruction for about 40 years)

2. His body of knowledge — Tom is basically a walking history book. He appears to NEVER stop learning (even after 40 years of teaching other people) and with a background in Law Enforcement he’s had the benefit of reviewing–literally–hundreds of violent crimes.

3. Where he is located — Tom is in Memphis Tennessee. Why is that special?

What You Should Know About Memphis, Tennessee

Memphis has a per capita violent crime rate about 2.5 times that of Los Angeles.

It’s consistently ranked in the top 10 most violent states.

Tom Givens likes to joke, “We tell people, try this, and they come back a couple of weeks later, ‘Hey it works.’”, referring to the ‘crime laboratory’ known as Memphis.

Now, imagine someone who served as a police officer for 25 years in a violent area like Memphis, TN. Think he might have some experience?

Now imagine that same person then retires, and starts teaching people for another couple decades–think you might be able to learn something from a guy like that?

Darn right you can, and it will probably save your life too.

While most people look for a “badass” SEAL Team 6, Delta, Black Ops, Commando, Ninja who has been in a lot of gunfights to learn how to defend themselves with a gun … don’t you think it’s just as important to look at learning from guys who have had their STUDENTS succeed in gun fights?

Afterall, maybe the guy can survive a gunfight but who says he can teach YOU how to do that?

Tom Givens has had over 60 students who have been in self-defense shootings. Not one of those students has ever lost. That means 100% of them used what they learned from Tom to successfully defend themselves and won.

Which Brings Us To Todays Topic, Why You Should ALWAYS Carry Your Gun …

“Most of you have heard me mention 62 wins/zero losses/3 forfeits. At last count (Jan 2015) we have had 65 students involved in defensive shootings that I know of. These are students who have reported back to the school or have been reported to me through law enforcement channels.

However, three students found themselves in need of a defensive handgun and did not have one.

All three were killed in separate street robberies. In the last incident, the victim had handed over his wallet and cell phone and was standing there with his hands in the air when he was shot in the face and killed. These are the three forfeits.”

In other words, don’t give up your chances of winning the fight before you even get in it.

If you have a gun for self defense, then carry it.

What Does This BIZARRE Twist On Media Bias Really Mean?