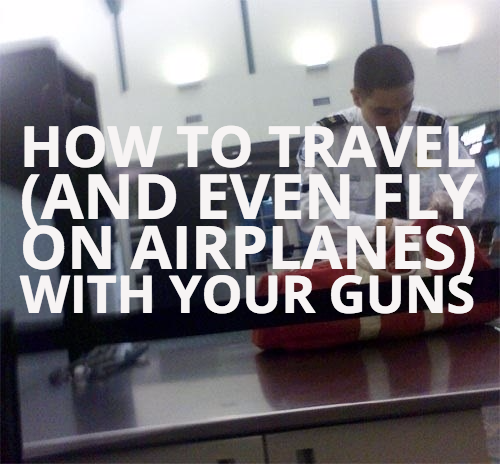 By the time you read this article, I will be flying through the air en route to our second annual Underground AR-15 Experience Workshop for this weekend …

I’ll spend the whole day Friday with our sold out class building rifles, then the next day we’ll go to Jason Hanson’s Spy Ranch to test the rifles we built and put them through a ton of Jason’s defensive rifle training drills!

It’s going to be a great time for everyone involved but FIRST I have to fly from my home state of Virginia out to Cedar City Utah.

That means I’ll be getting on an airplane. And I sure as heck am gonna be packing my trusty Glock out in Utah because it’s not a Police state like California or New York.

As I was preparing my bags for the trip, and getting my shooting stuff packed, I was double checking all the airlines and TSA guidelines for how to travel with firearms when it occured to me how valuable this information would be for YOU to know too!

So today, I’m having Jason Hanson himself fill in for me and show you how to travel practically anywhere with your gun(s).

Traveling with Your Gun on Planes, Trains, Automobiles, and Buses

Discover how to legally carry your gun as you travel around the country.

Whether it’s Christmas season or summer break for the kids, a vast majority of Americans travel throughout the year. Personally, wherever I’m headed I always want to have my gun with me. But, because there are so many different modes of transportation in this country it’s important to know what you legally can and cannot do.

For instance, let’s say you were driving to a relative’s house for a Fourth of July barbecue. You happen to live in the gun friendly state of Virginia (my home state) and your relative also happens to live in the state of Virginia. If you had your Virginia concealed carry permit you could simply drive to the barbecue carrying your gun as you normally do anytime you leave your house. You could do this in whatever state you live in as long as you have a valid concealed carry permit or the state allowed open carry.

But let’s say you live in Virginia and were going to Pennsylvania for the Fourth of July. Well, to get to Pennsylvania you have to travel through one of my least favorite states, Maryland. Since I don’t have a concealed carry permit for Maryland, I can’t just drive straight from Virginia to Maryland with my gun on my hip. Before I enter the state of Maryland I need to unload my gun, lock it in a case, and put it in the trunk. Once I’ve passed through Maryland and entered Pennsylvania then I can get my gun out and load it up and carry once again. Remember, this is what you have to do as you’re passing through any states that aren’t exactly gun friendly, such as Maryland, California, and New Jersey.

If your final destination happens to be one of these states then drive to your location with your gun locked up as described above, and then get your gun out. In other words, my in-laws live in California. When I go visit them my gun is unloaded and locked up. Once I get to their house then I can take my gun out and load it up and carry it while in the house or keep it secure in a safe on the nightstand. However, I can’t leave the house with it because I don’t have a California concealed carry permit.

Now that you know what to do regarding vehicle travel, let’s talk about flying with firearms, which is a lot easier than most people realize. Let’s say you live in Virginia and were flying down to Key West, Florida for a family vacation.

First, your firearm can only go in your checked baggage. Don’t ever attempt to put a gun in a carry-on. Before you head to the airport make sure your gun is unloaded and locked in a hard side case. A few of the cases I’ve used over the years include the standard plastic case that the gun comes in when you buy it, a GunVault MV-500 microvault, and a small pistol safe that has a combination, which you spin off to secure it. If you’re going to use the case your gun came in remember to put a padlock on it and if you’re using a combination safe remember to spin off the combination before you get to the airport.

As far as bringing ammunition with you, the ammunition must be in the box it comes in or another type of case that’s designed to hold ammunition. The ammunition can either be secured with the gun in the locked case, or it can simply be somewhere else in your checked baggage. Personally, because of space issues, I never have my ammunition inside the gun case, I just have it in the box it came in stored in my luggage sandwiched between my clothes.

I would advise against using the words, “I have a gun.”

Also, you check a rifle the same way you check a handgun described above. However, you are allowed to bring a scope in your carry-on luggage so you don’t need to put your scope in the hard-side case if you don’t want to. The fact is, I’ve flown all over the country with my guns and I’ve never had a problem, even when I’ve flown out of states like Maryland, which aren’t gun friendly.

I have to admit, I certainly don’t take the train as often as I drive or fly. But I know there are millions of Americans who use a service such as Amtrak frequently. If you happen to be riding Amtrak and you want to bring your gun, you must notify them 24-hours in advance. You have to call their main telephone number and talk to a live-person, you can’t make reservations online. Before you head to the train station you will unload the gun and put it in a hard side case, just as if you were flying.

The ammunition must also be in the cardboard box or another case the same way the airlines require. When you get to the station you will declare your firearm and ammunition and you will be required to sign a form that you’re allowed to have the gun and that it is unloaded. Since there are many different train operators throughout the U.S. in addition to Amtrak, make sure you call them and find out their specific requirements before you travel. But the good news is, almost all of them follow the same protocol as the airlines.

If your travels happen to involve a Greyhound bus, you may want to think twice. While you can transport a gun in your car, plane, or on the train, Greyhound does not allow you to have a gun. It doesn’t even matter if it’s unloaded in a locked case in your checked baggage. In fact, here’s the list of items prohibited from coming aboard a Greyhound bus:

As for me, my preferred mode of transportation is by vehicle. Then I’ll take an airplane. A train and a Greyhound bus are definitely options of last resort. Just remember, however and wherever you travel you need ensure you know each state’s laws, in addition to the laws of the type of transportation you’re using.