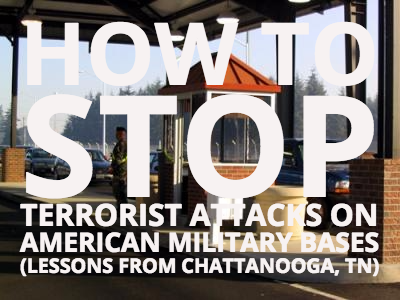 July 16, 2015 – a 24 year old lone killer attacked first a military recruiting center and then a Naval Reserve Center in Chattanooga, Tennessee in what officials have called a “brazen, brutal act of domestic terrorism.”

Info is still coming in as I write this, but it’s clear the suspect identified as Mohammod Youssuf Abdulazeez — a naturalized citizen born in Kuwait — has embraced Islamic extremist views …

He killed 5 military personnel and wounded at least 3 others before he was pursued by Police and killed in a shootout. The best source I found says

“… officers “actively and enthusiastically” engaged with Abdulazeez on Amnicola Highway, where he died. Police have not said he was shot by officers or killed himself.”

Once again, this killer was not on any FBI “watch lists” before the shooting. (This would seem to indicate that the Government spying on every American is not a winnning strategy). What is interesting to note is that, as I understand it, his parents were investigated by the FBI at one point.

So what can we learn from this? How can we protect all of our military on our bases?

The answer is simple as always …

ISIS is in a war with the US Military. This is a guerilla war (an important point.)

They therefore want to kill American soldiers. They made this quite clear with many threats posted online, releasing statements on social media like this “‘Kill them in their own lands, behead them in their own homes, stab them to death as they walk their streets thinking that they are safe.'”

Why are these killers able to attack American Military bases?

American Military bases are gun-free zones. As an aside, one thing I did not know, was that this gun-free law was actually passed by George H.W. Bush (not Clinton as I mistakenly believed before).

In any event, 5 military personnel were killed in this attack. Why in the world are soldiers EVER required to be unarmed by protocol?

Hell, it takes exactly ONE day (a couple hours really) to learn how to safely carry and proficiently use a firearm to defend your life or the life of a loved one … and … American soldiers spend weeks in boot camp.

To think that we can’t trust American soldiers to carry on bases is absolutely retarded. I’ve not been following the Presidential races too closely, but I’m glad that Donald Trump said he would end the gun-free zones on Military bases if he was elected (let’s hope that all the presidential candidates follow his lead).

And it almost really is that simple.

Take the site of the first shooting, the recruiter office, it was a gun free zone. Look at this picture from the news and you can see I’ve marked the big “No Guns Allowed” sign on the front door (right next to the bullet holes from the terrorist attack!)

President Obama had a press announcement shortly after the attack and said this:

“We take all shootings very seriously,” Obama said. “Obviously when you have an attack on a U.S. military facility then we have to make sure that we have all the information necessary to make an assessment as to how this attack took place and what precautions we should take in the future.”

The “precautions we should take in the future” are to end the gun-free zones on military bases.

In fact, end them all over the United States so that more good people can use guns to kill bad people instead of the other way around. It’s that simple.

The truth is: criminals intent on killing people are already planning to commit the most heinous of all crimes — premeditated murder — so they have no problems breaking minor crimes such as “gun control” laws. That measn the only people following “gun control” laws are good, decent, law abiding citizens … and … it turns them into helpless, unarmed victims who are easily slaughtered by madmen.

Will this prevent all murders, all killing? No. But it will certainly end “mass” killings to a significant degree …

The bottom line is you should get a gun, learn how to use it, and start carrying it with you everywhere you go.

NOTE: as this article goes to press, a 9mm Glock was recovered near one of the dead Marines on the military base. The Washington Post reports “Investigators are trying to determine, based on forensics, whether the pistol, a 9mm Glock, was used in an exchange with the shooter, Mohammad Youssef Abdulazeez, and possibly wounded him, officials said.” I for one, hope a marine DID ignore the “rules” on his base and was carrying a 9mm Glock and I hope he did at least wound the attacker.