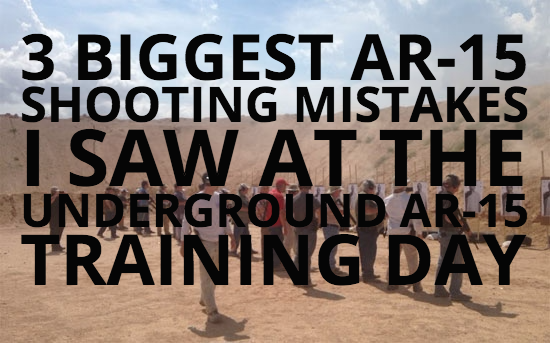 Day 2 of the workshop was spent in the desert at Jason Hanson’s Spy Ranch range where all 20+ attendees got to shoot their rifles for the very first time.

I got to be a “Range Officer” and help run the shooting line. I gotta admit, I was jealous that I wasn’t shooting, but I did get to see how a lot of people handle their AR-15 during these defensive drills.

As I was reviewing things later, I noticed there were three mistakes that I kept seeing occurring over and over again, that I’d like to share with you today because I think it can help you run your AR-15 better.

Mistake #1: Finger Off The Trigger

One of the mistakes I saw over and over was shooters getting on the trigger too early. That is, even at the low ready, before coming up on target, many shooters started to let their fingers “float” down towards the trigger.

But I think what this comes from is WHAT does “finger off the trigger” mean?

It is, straight, off the trigger and in REGISTER alongside the part of the lower receiver above the trigger and trigger guard. In short, get your finger as high and far away from the trigger as possible as you can comfortably put it, every single time.

When thinking of trigger finger placement, whether you run a handgun or carbine or shotgun, there are only two places your finger can ever be:

*** At “Home”: which is in register, at a repeated ‘tactile indicator’ index point away as far away as is comfortably possible from the trigger and trigger guard.

*** At “Work”: On the trigger, prepping it and/or starting to press it because you’ve made the decision to shoot and your sights are on target.

Notice, I said a repeated index point with a “tactile indicator”. On a handgun, it helps to pick out somewhere on the frame or slide or even the ejection point that you’re going to touch every time your sights come off the target and your finger comes off the trigger.

That way you are building “muscle memory” that every time your sights come off target, your finger is off the trigger and going “home” to the repeated index point.

On the lower receiver of the AR-15 it will depend on your finger length, but pick a spot (the bump outside of the magazine release button, the lower part of the dust cover when it’s open, etc) you can touch. You need a spot that you repeatedly tell your finger to go to whenever your sights come off the target that you can feel and you know it when you touch it with your finger (why we call it a “tactile indicator”).

That way your brain has only a two-way “decision tree” — either on the trigger (when your sights are on target and you’ve made the decision to shoot) or finger straight and touching the index point on the lower receiver.

This should become and engrained habit after a bit of practice, which is the goal.

Mistake #2: Forgetting about the AR-15 safety.

The AR-15 has a safety that you should use. Along with taking your finger off the trigger when your sights come off the target, you should engage the safety as you come down to a ready position.

That means, by necessity, you need to dis-engage the safety as your bring the gun up and the sights on target and your finger to the trigger or the gun (obviously) won’t fire.

Both are also something that you can easily correct with a little bit of practice and it will become habit after a while. Again, we had many people that either hadn’t ever shot an AR-15 or were WAY out of practice, so this is easily corrected, but remember to use the safety because that’s what it’s there for!

Let me make it clear upfront that this was NOT a mistake that these particular attendees could help, because it’s not their fault.

Few things to talk about here …

First, as we get older — for most of us — our eyes get worse. There were a few attendees that had trouble seeing the front sight of the AR-15.

This is because their eyes were not as good as they once were and two other things. One, the front sight is black, and two, some of the targets they were shooting, the “aiming point” was black, so it made visually lining up the front sight hard.

Again, this is just the way the cookie crumbles right, it’s not a mistake per se … but … here’s some ideas to fix it because obviously seeing your sights is a big deal:

1. Get a high-er visibility front sight on your AR-15 (XS sights makes a big dot tritium sight system for the AR-15 for example)

2. Get an optic (this should actually be your first choice) such as a red-dot aimpoint optic that makes it VERY easy to visually index.

3. The first two tips will take care of the hardware issue, now while you can’t choose what color shirt a violent criminal will wear, you can choose to use different targets at the range to make seeing your “aiming area” easier. I.e. if you have trouble seeing your black sights on a black target, then use different color targets.

Two out of these three mistakes can be easily solved by practice. Again, a lot of attendees were either severely out of practice or very new to the AR-15 platform. That’s fine, because that’s what they were there to learn, how to use the AR-15 for defense.

The point I’m making though is that working with the AR-15 safety and building better trigger discipline can be EASILY addressed through “dry practice”. Meaning with an unloaded AR-15, you can practice these weapon manipulations until they are habits and you are no longer fumbling with the rifle. Heck, so can your ready position, coming to a firing position, trigger press, reload technique, malfunction clearing, etc … almost everything you can do with a gun that makes you a “good shooter” can be practiced dry (with no ammo) except recoil control and sight tracking.