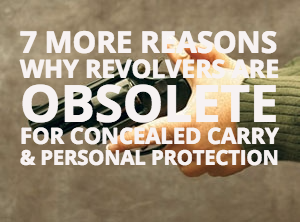 In my recent article on why revolvers are NOT more reliable than modern semi-auto handguns, I ticked off a lot of die hard wheel gun fans.

In truth, I expected the backlash … but… this isn’t about making friends, this is about sharing hard-won info that can save your life, or the life of someone you love.

If that means I have to skull-stomp a sacred cow then so be it.

What’s more: I said at the outset that “if you like you wheel guns, you can keep em’!”because I’m sure I’m not going to get a die hard revolver fan to give up his favorite piece. And why should he? If you like it, keep doing it … just don’t mislead others into thinking that 1800’s technology is somehow the best choice for personal protection and/or concealed carry in 2015. It’s not.

So let’s continue and talk about why Revolvers are obsolete for a self-defense fighting gun.

You Need a Fighting Gun …

One thing you’ll hear from the lefties and anti-gunners is “all guns are made for killing” — to quote Tom Givens — that is nonsense.

There are guns made for all types of things. Sporting uses, hunting, target shooting, plinking or fun shooting, as collecter pieces (Art basically) and more.

For our purposes, we’re talking about a fighting gun. You want a gun that you can carry with you on your person that is reliable, effective, concealable and made for fighting.

With THAT criteria in mind, let’s talk about why revolvers are not a good choice for most people (we’ll be focusing on the double-action revolver because nobody in their right mind would argue that a single-action revolver is an actual choice on the table)…

1. Low Capacity. Yes, I’m starting by hitting below the belt because it needs to be said. Revolvers fall way short in capacity. The common concealed carry chioce, the J-frame holds only 5 rounds. That is woefully inadequate for a fighting pistol for a number of reasons.

Consider that even untrained shooters can shoot 4 rounds per second, and you realize that a J-frame can only keep you in the fight 1.25 seconds. With the typical gunfight lasting 3 seconds … that doesn’t sound appealing.

One magazine in the Glock 19 holds 15 rounds (plus one in the chamber) giving you three times the ammunition to save your life without reloading.

Statistically, just drawing your gun will most likely cause your attacker to run away and you won’t need more than 5 shots … but … if we’re talking statistically then you could take the odds that you’ll never be in a gunfight in the first place, so why carry a gun?

2. Hard (impossible?) to reload. Revolvers are hard, to near impossible to reload under stress. As we discussed, 5 bullets may not be enough to stop your threat or get you out of trouble and you may need more. Good luck trying to reload your revolver in time though. This is the reason the “New York Reload” became so popular with the old NYPD who would carry two revolvers so when one went empty you just grabbed the backup gun and kept shooting. Again, you would need three new york reload, 5-shot revolvers to (almost) equal the capacity of one Glock 19 magazine (15+1).

(Yes, I know Jerry Miculek can shoot 6 shots reload and 6 more with a revolver in less than 3 seconds — you are not Jerry Miculek. And I’ve never heard of anyone doing it in a gunfight — that wasn’t a cop, already hidden behind a car with plenty of backup.)

3. Bad Sights. In my experience the sights on J-frames and other concealed carry revolvers are hard to aim with. It reminded me of a bead on a shotgun, just not that precise. (It’s my understanding, the Baughman ramp found on most fixed-sighted S&W revolvers was designed in the 1930s to alleviate snagging on the leather holsters of that era. Not a problem nowadays.)

Now, I am NOT one to say that Glock sights are good to go from the factory because I hate them with the passion of a thousand suns … but … I would still take the stock Glock sights over the last revolver sights I used.

Plus, in most cases you’re carrying a 2 or 3 inche barrel wheel gun (because its small and easy to carry) which reduces the sight radius, making it even harder to aim …

4. It’s Bulky. The J-Frame is considered the gold standard “pocket gun”. You can just drop it in your pocket and get on with life. The Glock 26 is almost the exact same size, but because of the revolver’s cylinder, the Glock (not a thin supermodel size gun by any means) is actually thinner. The Glock 26 holds 10+1 rounds vs the J-frame’s 5.

6. Stout Recoil. People like J-frames because they’re easy to carry because they’re small … and … now they’re light. They kept making smaller, lighter revolvers and now there are not just steel but aluminum, scandium and even titanium frames on small revolvers. These are all so light, that when you put in a good +P .38 self defense load (or a .357 magnum …) you get a gun that kicks. Hard. Harder recoil makes a gun harder to shoot accurately, fast, under stress.

7. No good way to carry extra ammo. Along with being hard to reload fast under stress, and not carrying much ammo on the gun, even the “reloads” you can carry are not easy to use. There are five basic ways to carry reloads or additional ammunition for the revolver:

1. Loose cartridges in a pocket.
2. Cartridges in a dump pouch.
3. Speed strips that hold the ammunition in a straight line.
4. Speed loaders.
5. Moon clips.

I believe most wheelgun shooters prefer speed loaders, because it’s the one method that sucks less to reload with, but it’s still far less than ideal.

Consider that with a modern semi-auto like the Glock 19 you have three times the ammunition on board with the weapon (15 vs 5) and then if you want to reload it you can either carry 15 MORE rounds in one magazine (or you can do like me and carry a Glock 17 magazine as a backup, with 17 rounds) and the additional magazine is easier, faster, and more reliable to reload with.

Not only are revolvers not more reliable than the modern semi-auto pistol, they are just not a good choice overall as a fighting pistol.

For all the diehards out there … consider this:

In 1911, the ARMY and the rest of the military made the decision to switch to a semi-auto pistol, replacing the revolvers used in the past. This was over 100 years ago. If I told you today that tomorrow you would be sent to the Middle East with an M4 Carbine and a sidearm and you had a choice between a J-frame revolver or the M9 Beretta 9mm handgun which would you choose?

Nobody in their right mind would go into a fight with a 100+ year old design weapon with less capacity, a worse trigger, worse sights, no good way to carry reloads, etc

The decision is an easy one.

Don’t forget why you carry a gun in the first place (you might have to get into a gunfight, so you want a gun you can fight with) …

Again, revolvers are cool and all but they are a victim of the technology of their time. They are over 100+ year old technology and the world has moved on. There are much, much better choices for a fighting pistol than the 5-shot concealed carry revolver.