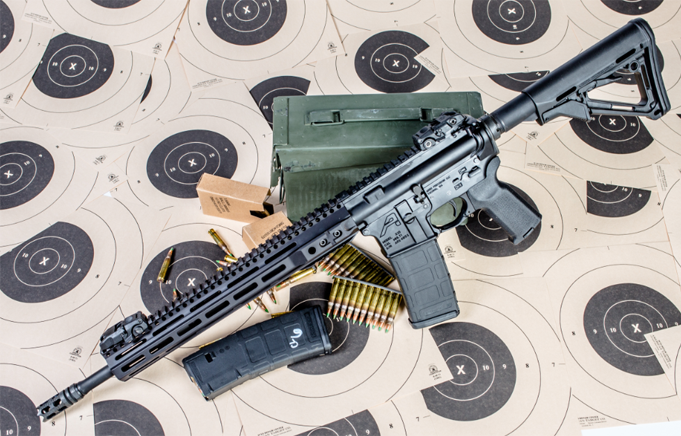 Recently I pointed out that you should almost NEVER unload your self-defense handgun for two major reasons:

1.) A loaded gun is not necessarily more safe than an unloaded gun and

2.) Because constantly loading and unloading the same cartridge into your handgun can cause a number of problems that can totally ruin your ammo.

At best, you’ll have no problems.

At worst, your ammo either will “click” instead of “bang” when you need it to save your life … OR … your gun will blow up in your face.

In short, the best course of action is to never rechamber–or set a hard and fast rule like no more than twice–the same ammo in your handgun to avoid dying if you ever need your handgun to save your life (or having it blow up in your face).

After I posted that article, I had a few comments and one of them pointed out that the same is even MORE true for the AR-15 and it’s so important we’ll talk about that today.

To recap, there are two main problems with unloading and reloading the same ammunition multiple times.

Each and every time a magazine-fed firearm feeds cartridges into the chamber, the bullet is being violently whacked as it is chambered.

The loading cycle causes the top round to be stripped from the magazine and slammed tip-of-the-bullet-first into the feed ramp before being deflected up and into the chamber.

The first time it’s done is usually not a problem with good ammo. But repeated chambering of the same cartridge can force the bullet slightly backward into the case mouth of the brass.

It’s simple physics that as the bullet is pushed further back into the brass casing, there is less volume of space in the case containing the powder, which multiplies the pressure that will be generated when the cartridge fires.

The picture below is a random one I found on the internet. It’s an example of how repeatedly chambering the same self-defense hollowpoint round caused bullet setback:

While this is not as common in rifle cartridges, such as the AR-15, it can happen as well. Standard military AR15 ammo was designed with a cannelure and the casing is supposed to be “crimped”, both of which should help protect against this. But, of course, not every round is perfect and it can happen as you can see in the picture below (as I understand it, this round caused a stoppage in the AR15, so thankfully it did not fire. If it had, it looks like it would of been dangerously over pressured):

In the article I shared on not reloading handgun carry ammo, the finding of the ammo manufacturer said, ” … the cause of the misfire was determined to be from the primer mix being knocked out of the primer when the round was cycled through the firearm multiple times.”

So repeatedly chambering the same round in your handguns can ruin the primer mix and cause the round to misfire.

But it’s even more important in the AR-15.

As commenter Franky2Shoes pointed out in my other post, “On AR’s it’s a bigger issue due to the free floating firing pin that literally taps the primer upon chambering” and that’s absolutely correct.

DocGKR, who I’ve referenced before as a terminal ballistics and ammunition expert writes this:

“A large SWAT team in this area had a failure to fire from an M4 with Hornady TAP ammo during an entry–fortunately no officers were hurt and the suspect immediately threw down his weapon when the carbine went click instead of bang. After the incident was concluded, the team went to the range and expended the rest of their carbine ammo and had one additional failure to fire. This same team had 3 Hornady TAP rounds fail to fire in training a couple of years ago. When Pat Rogers was teaching a class at a nearby agency, there were 5 failures to fire using Hornady TAP ammo. In all 10 cases, there appeared to be good primer strikes, but no rounds fired. On analysis, the ammunition had powder and checked out otherwise.”

“However, despite what appeared to be good primer strikes, two problems were discovered. First, when accurately measured, some of the primer strikes had insufficient firing pin indentations. The failed round from the potential OIS incident had a primer strike of only .013″—the minimum firing pin indent for ignition is .017”. In addition, the primers on the other rounds were discovered to have been damaged from repeated chambering. When the same cartridge is repeatedly chambered in the AR15, the floating firing pin lightly taps the primer; with repeated taps, the primer compound gets crushed, resulting in inadequate ignition characteristics–despite what appears to be a normal firing pin impression. Once a round has been chambered, DO NOT RE-CHAMBER IT for duty use. Do NOT re-chamber it again, except for training. This is CRITICAL!!!“

It’s common (and infuriating) knowledge that soldiers are not allowed to have loaded weapons on their bases. As far as I know this is the same even overseas in “war zones”.

Here is a story DocGKR shared on a forum (he said it was copied as written–adult language included–at LF by “03humpalot”):

“I have relayed this story to a few of you before but here it is again. Pay attention to what DocGKR posted above because it could very well save your life.

My first shooting in Iraq i threw my M4A1 on semi and ATTEMPTED to fire a controlled pair (First round functioned striking the threat and the second round did not function) i then transitioned to my secondary (glock 19 shooting ball) and had a failure to fire on my first round. Eek…i was Waaaaaay behind the power curve at this point.

At this point i was contemplating all of my various bad life decisions which had lead me to that point in my life and grabbed an M240B and solved the problem.

I AM VERY LUCKY TO STILL BE UPRIGHT AND BREATHING TODAY….the cause of these malfunctions you ask?

Repeated chamberings of the same ammo.

I made a decision that day that my life was more important than following archaic rules written by those who sit behind desks and started shitcanning rounds after i was forced to clear weapons on U.S. Military installations.

The .gov can fuckin bill me.

And, through some digging online, it appears the ARMY issued a “Maintenance Advisory Message” recommending that the same rounds not be repeatedly chambered in 2004 (emphasis mine).

b. Reports from units deployed in Iraq indicate troops lock and load 5.56 mm cartridges in M16 rifles and M4 Carbines prior to operations. Upon completion of the operation, weapons are cleared and the loaded cartridge is ejected. The ejected cartridge is then reloaded back in the magazine.

c. Each time a cartridge is chambered in an M16 Series Rifle or M4 Series Carbine, a slight, but noticeable indentation is made on the primer. This is caused by contact of the free-floating firing pin against the cartridge primer as the bolt closes on a chambered round. This is normal operation of the weapon and does not result in any immediate degradation of the weapon and ammunition’s performance. Repeated bolt closures on the same round could make the primer insensitive and potentially cause a misfire.

A misfire is the failure of the cartridge to fire when the trigger is pulled. However, the rechambering of an indented round will NOT cause an accidental discharge. Testing was performed examining repeated chambering of rounds on the M16 Series Rifle and M4 Series Carbine and tests resulted in no accidental discharges of the weapon. Although misfires can occur for numerous reasons including repeatedly chambering of the round, the likelihood of a misfire is remote and easily correctable by immediate action procedures.

a. Recommend soldiers rotate their ammunition so they are not chambering the same round repeatedly. This can be easily done in conjunction with the Hot, Dry Climate-Desert procedures per TM 9-1005-319-10, page 0009-00-5. The TM states ammunition and magazines, which have been exposed to dust and sand, should have the magazines unloaded and the  ammunition and insides of the magazine wiped clean daily.

b. Cartridges, which have been chambered, are identified by the slight indentation in the cartridge primer. Recommend that repeat chambering of the same cartridge be minimized as discussed above.

The Bottom Line Is, Don’t Re-Chamber “Duty Loads” More Than Once

Whether it’s your AR15 or your handgun, you most likely have “duty loads” aka self-defense ammo and “practice” ammo.

The self-defense ammo is definitely more expensive, so I understand that you may want to “conserve” it as much as possible to save money but the best thing to do is just buy 500-1000 total rounds of your chosen self-defense ammo.

Then every time you have to unload your AR-15 or handgun, simply take that round that was previously in the chamber and throw it in with your practice ammo pile.

How much self-defense ammo you need depends on how often you plan to unload your gun. If you unload it once per week, that’s 52 rounds per year that you’ll need, etc.

After you chamber a round once, think of that round as “practice ammo” from now on. Especially if you are using an AR-15.