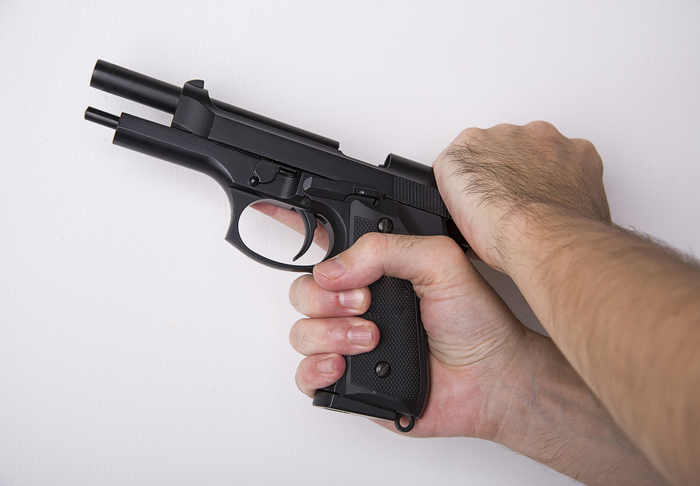 Today, I want to start a WAR amongst gun owners by talking about the “best” way to reload a handgun.

Why a war? Because this is a constant debate amongst gun guys.

Instead of fighting about it, let’s talk about it this way:

1. What’s the FASTEST way to reload your gun?

2. What’s the EASIEST way to reload your gun, especially when teaching beginners?

Between gun guys there is a constant debate that has raged for a millenia … or … uh … at least a good bit of time on the internet.

What’s the correct way to reload your gun?

Specifically, one camp says use the “slide lock” with your thumb and the other side says that that’s too unreliable and won’t work under stress and they preach manipulating the actual slide.

Here are the four most commonly taught methods to release the slide during a reload, by Paul Sharp:

As you can see, Paul Sharp shows four methods:

Both 1 and 2 are the fastest ways to get the slide closed and get the gun back in action. This is proven, this is true, and it’s the reason why almost all competition shooters use the slide release button.

Numbers 3 and 4 are taught by a lot of “defense” oriented pistol instructors and for various reasons.

The only “reason why” that doesn’t hold up is the “stress response”. They say that during a gun fight your adrenaline and other stress hormones are so high that you can’t use your fingers to do “fine motor skills” like thumbing a slide release. These people are obviously wrong because aiming your gun using the sights, and working the trigger are also all “fine motor skills” that hundreds, if not thousands, of people have all done in a gun fight before you.

To me this is actually a simple argument and here is my answer:

Do What You Want, But One Method is Proven Faster

If you are concerned totally with how fast you can reload, then you should use the slide lock button. It’s the fastest way to release the slide when reloading. Period.

I do think that there are benefits to teaching a slide manipulating method to beginners.

In the video below James Yeager demonstrates his method to reloading the auto pistol and then shows how the same “idea” is used to reload the AK-47 and AR-15 as well — insert the magazine, run the “slide”:

The Benefits of “Non-Diagnostic Weapon Handling”

James talks in the video about “Non-Diagnostic Weapon Handling” and he actually has a good point.

He says that you’re training to handle the weapon in the same way every time. What do we do with handguns? We load them, reload them, and type 1 (round doesn’t go off or empty chamber), 2 (stovepipe, or failure to fully eject), and 3 malfunctions (double feed).

He points out that for EVERY one of those a “Tap, Rack, Assess” works for every one of those things you can do with a handgun.

Again, I don’t buy the argument of “under stress” the rack the slide method is better … but I will say … having taught and seen a lot of beginners fumble with their weapon manipulation skills and being “unsure” about how to use the handgun, that teaching ONE method to simplify the process for EVERYTHING you can do with a handgun is quite appealing.

In short, if I had one afternoon to teach someone to use a handgun, I’d show them the “Tap, Rack, Assess” method of reloading because as James points out then the only thing you need to remember is “If a Tap, Rack does not fix it then reload the gun” and then it’s the same tap, rack to reload it.

But if you’re a student of the gun … and your gun handling/manipulation skills are already good … and you want to get faster, and more efficient, then you might want to adopt the slide release reload as you improve because it is faster. I guess it’s up to you if that small improvement in reload speed

What do you think? How do you reload and why?